Sameera Dahiya quit an IT job to become a biker. Here's why she's super positive today

Sameera Dahiya quit her high paying corporate job to be a full-time biker. Three years and 80,000 kilometres on she's gearing up for the Raid De Himalayas 2019

Why should big bikes only be associated with men? This is a thought that rankled in Sameera Dahiya's mind quite often. To put paid to that outdated notion, she decided to quit her corporate job and become a full-time bike rider. A Delhiite who completed her Engineering in Computer Science in 2011, she came to Bengaluru in search of a job. Until 2015, she worked in several multinational companies as a software engineer, "I am not a person who can do a 9 to 5 job. Life was turning out to be monotonous and that is why I thought that I must do something different. But biking or racing was never on my list. There was no passion for biking until one day when I got on a bike as a pillion rider."

And so, in August 2015, Sameera bought a second-hand Bajaj Pulsar 180 which cost her a shade under Rs 20,000. After slowly gaining confidence with her riding, in September she took a solo trip to Coorg. "These days, many women have started riding big bikes. They use GPS and also wear protective gear. Back then, when I chose to ride, I had a paper map to follow the routes and used very little gear. Since I was new to the state, language was also a barrier for me. The trip was for seven days and I hadn't told my parents or my friends where I was going. When I came back and told them all about it, some were happy, others were shocked." she says happily. 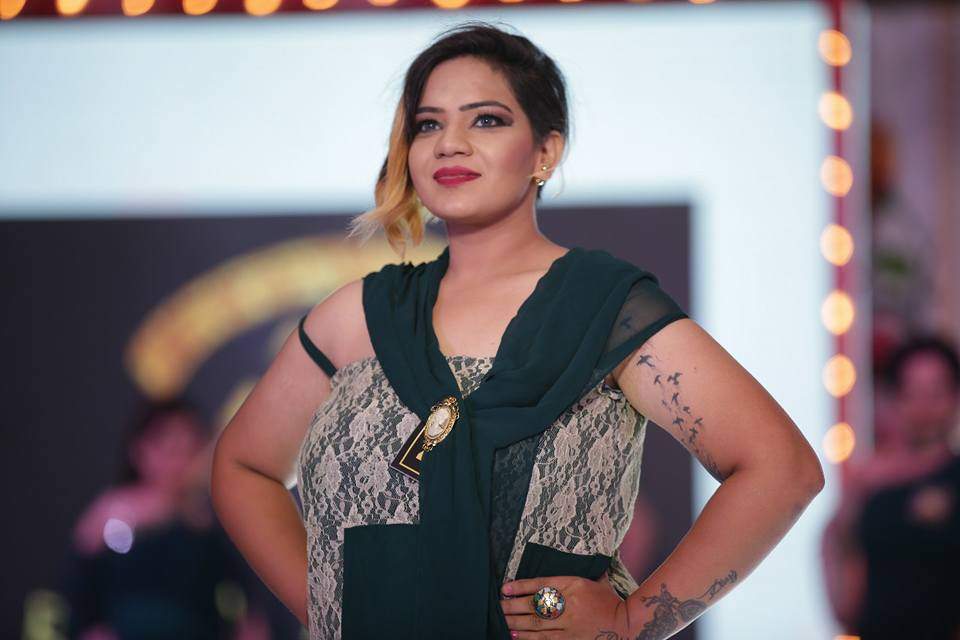 Beauty pageant: Sameera was crowned the second runner-up for the North India Plus Size 2018 held at Chandigarh in July 2018

After riding the Pulsar for eight months, she decided to buy a Royal Enfield Classic 350 — so that she could do the trip from Bengaluru to Leh-Ladakh. "I had asked for some money from my father and also taken a loan from a bank. Initially, my father thought it was just a crazy phase and that I would sell it after a few months. When I was on a road trip to Ladakh in June 2016 with a gang of six boys, we stopped at my home in Delhi and that is when my father realised how passionate I was about riding." From her Royal Enfield, she then moved on to the KTM Duke 390, a few months ago. Three years and 80,000 kilometres on, her sights are now set on biking across the North East, Bhutan and Nepal.

Sameera works a trainer with women biker group Bikerni Bengaluru, conducting training sessions on the basics of handling the bike and road safety. Talking about how it was tough for her to raise money without her corporate job, we asked her a fairly unasked question: How expensive are these road trips that bikers often take? She breaks it down for us, "When we rode from Bengaluru to Leh, it cost us somewhere around Rs 80,000, one way. But then, these road trips are not just for having fun or passing time. It's to know each other's stories."

She hosted the first edition of a talk show called Plus Talks - Life Beyond Sizes in Bengaluru. It is a platform for people to come and speak about body shaming and their experiences.

She also worked hard to ensure that she was physically up for it, despite a few extra kilos gained along the way, "Gaining weight did not kill my confidence. This led me to practice Yoga every day so that even if I was heavy, I remained healthy. Now, I also work as a plus-size model for a plus size clothing brand called Excellent," she says proudly.