Right from attempting to increase the admission fees, to making entrances entirely online and now to fee-hike, it becomes clear the motive is to turn public spaces into exclusive access zone

The tyranny of the powerful nexus of corporate, state and institutions has brought about a complete demolition of the inclusive and democratic ethos of a university. The JNU administration’s authoritarian way of functioning has culminated in the demise of the celebration, we call JNU. This is the administration that denies its workers, who are at the lowest rungs, their Diwali bonus. It enters into a new contract with a security agency, despite having employed lesser numbers of security guards for the same amount paid. Simultaneously, the administration makes excuses to lockdown the social-spaces of our campus by claiming they don't have enough security on campus. The subsequent fund cuts from the academic domain are deployed into making the campus, a rather panopticon one.

The deceitful act of passing the hostel manual without taking cognizance of democratic voices, represented by JNUSU, can in no way be justified. And terming the protest that entails struggle of the entire student community as a nuisance by “some” students is disrespectful of the individual agency of independent and thoughtful students. What is the genesis of this fear from engaging in debates and discussion and resorting to unilateral decision-making? 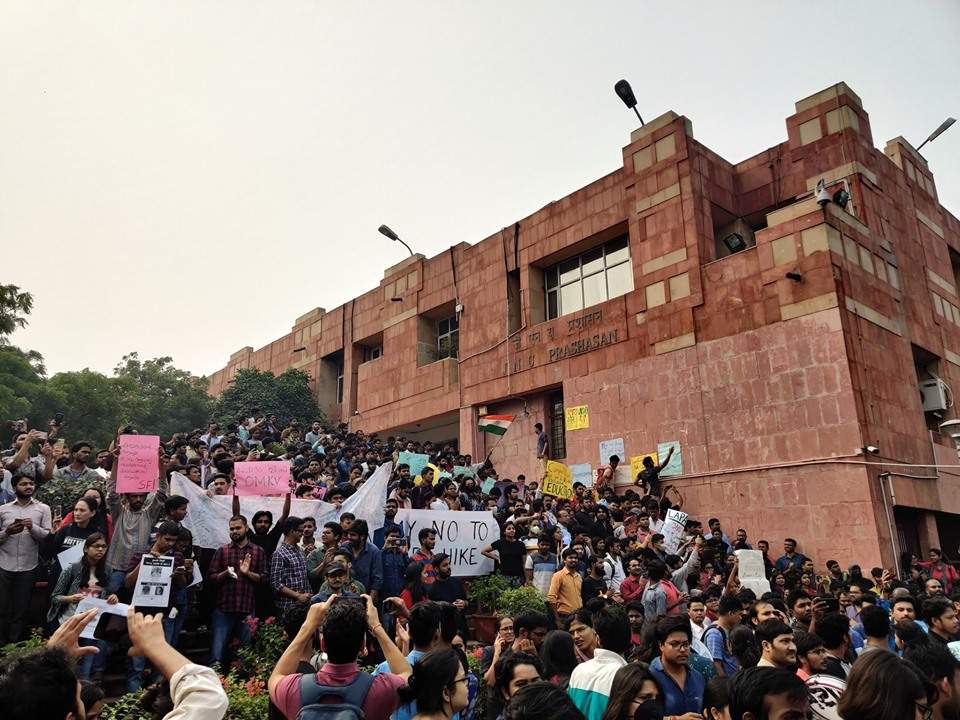 The hostel manual, as passed, has confirmed the alleged “rumour-mongering” about fee-hike. The administration denies the rise being “massive”, which shows their privileged stance as to where they locate themselves on the question of socio-economic justice. More than 40% of students come from families having income less than 12000 per month; the increase in room rent by 300%  accompanied by Rs 1700 as utility and service charges, which excludes water and electricity bill to be added as per the usage, all the while the merit-cum-means scholarship remains at being 2k per month. Shouldn’t there be apprehensions about excluding the students coming from marginalized backgrounds? On top of it existing students will have to leave their courses upon their failure to pay hefty charges. This is an actualization of JNU becoming an economically privileged zone. Critical thinking shall no longer guarantee us education,  the size of our pockets will. This act of the administration runs contrary to everything that JNU stands for. Right from attempting to increase the admission fees, to making entrances an entirely online affair and now to fee-hike, it becomes clear the motive of the government is to turn public spaces into exclusive access zone for few privileged ones. This is a logical culmination of understanding reached by the university, UGC and MHRD towards “graded autonomy”, where pedagogy would still be monitored, the financing would follow free-market mechanism, where only money can buy education.
JNU is not an exception to the general rule but is a microcosm of a larger macrocosm of the state being the alliance of neo-liberalism and neo-fascism. The pertinent question remains how does this government aim to make India a Vishwa-guru? By denying its people the right to quality education. The pseudo-nationalist discourse cannot take us far as a nation. A nation is its people, in modern times nation is where the people have their citizenship rights. Can there really be a nation that denies its citizens the social and economic rights of citizenship (which is not restricted by age)? Can the Hindutva-nationalism dare to justify their dismantling of every mechanism that is useful for the nation in making?

We don’t just study what democracy is, we live democracy in JNU. This is our space and legacy. We shall not roll back until they stop meddling with our campus. This false and divisive narrative about nationalism can never run a nation as diverse as India, respect for the people and their demands does! As much as you try to write an obituary, JNU shall fightback.

(The author is a first-year student at the Centre for the Study of Social Systems, School of Social Sciences, JNU)