Girish Karnad: A man who had the strongest and best lines — both on stage and in real life

One of the last times that Girish Karnad was seen in public was when he was participating in an event to mark the death of Gauri Lankesh. He turned up to the event with a nasal cannula and a placard around his next that said  — I'm an Urban Naxal. This was after the SIT probe revealed that he was the first on the 'hit-list', Lankesh was actually second. And that was the man that he had been all his life, whether in activism or in theatre, he always upstaged those who were trying to bring him down.

Today, the limelight shines on an empty spot. After a prolonged illness, Karnad passed away at the age of 81. The noted playwright, actor, director, Padma Shri and Jnanpith awardee, Karnad was born in 1938 in the Bombay Presidency. His mother (a nurse) and his father (a doctor) fell in love with each other but had to wait five years to get married because his mother had been a widow with a child and society was against widow remarriages. It's no wonder that Karnad spent the rest of his life as a rebel against regressive societal norms. He also got his love for theatre from his family that frequented plays.

After he got his Bachelor's Degree in Mathematics and Statistics, he got a Rhodes Scholarship and studied Philosophy, Economics and Politics at Oxford. He was also elected as the Oxford Union President.

He returned to India and worked in Chennai for seven years with the Oxford University Press. After that, he became a full-time writer. It was in Madras that his tryst with theatre started when he became involved with the popular theatre group - The Madras Players. He was only 23 when his first play came out and it was an instant hit. Karnad revolutionised Kannada literature which was at that point highly influenced by Western literature. He was able to to bring together history and mythology to deal with contemporary issues. His characters were always battling psychological and philosophical battles.

His artistry did not stop at the theatre as we very well know, he moved to cinema soon — he acted and directed. Won many accolades for the same. He served as director of the Film and Television Institute of India (1974–1975) and chairman of the Sangeet Natak Akademi, the National Academy of the Performing Arts (1988–93).

But even as he dabbled with various forms of performance art, academia and literature, he constantly remained engaged with socio-political matters. He was a strong voice against Hindutva and right-wing ideology. He was not one to fear the establishment. He was probably one of the very few famous personalities who condemned the Babri Masjid demolition. He also spoke against the attempts to create controversy about the Idgah Maidan in Hubballi. He spoke up for the rights of Indian Muslims and even suggested that the Bangalore Airport be named after Tipu Sultan, the much-loved ruler in Karnataka. 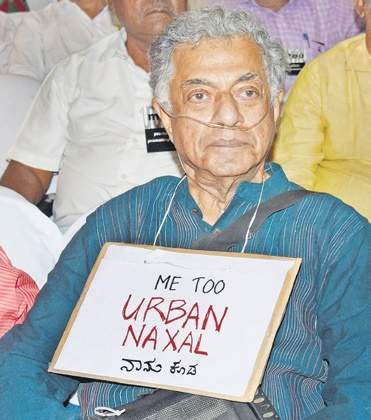 He has consistently spoken out against the RSS, BJP and Modi. When a newspaper once claimed that he had praised Modi at an event, he immediately shot off a mail refuting it. In it he said, "I was however troubled when I heard that the story, discreetly consigned to a corner of the Bangalore edition, had been projected differently in other editions of the concerned paper. In other editions, besides attributing to me words I never spoke, the front-page displayed a file photograph, totally unrelated to the Dharwad event, of me wearing a saffron teeka on my forehead. Let me add that I am totally irreligious and wear a teeka only at weddings and festivals, or while acting in films."

Be it literature, theatre or cinema, he managed to leave a mark as most legendary artists do. But as a man who was brave enough to be anti-establishment almost all his life, he will go down in history as a voice that remained strong till the very end.