After the death of a techie, someone painted 'Who Killed Ragu' on the road he died on — and this image went instantly viral across TN, leading people to start several campaigns online

When he actually died in a road accident last weekend, very few people beyond his family and friends would have known K Raghupathi. By Monday, it's safe to assume that most of Tamil Nadu's social media connected population hadn't merely heard of him — but were using his death as a rallying point for campaigns online. And it's all thanks to one graffiti artist and his simple mark of protest. 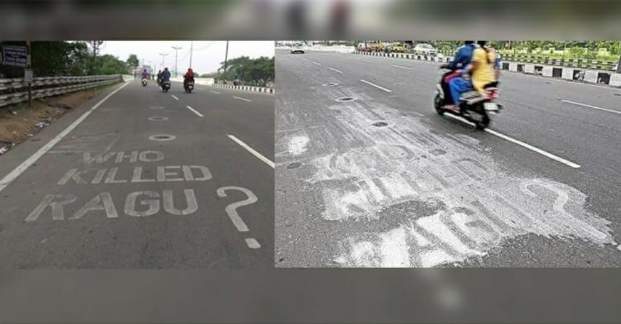 Voice of a common man: Government had erased this graffiti art at a speed at which they NEVER react to issues

After Ragu's death, someone, ostensibly a person who knew the techie from the US well, went to the spot where Ragu's bike had allegedly hit a hoarding on the road — also, where he breathed his last — and painted in BOLD WHITE LETTERS - WHO KILLED RAGU? Before the police could get the graffiti covered with white paint, the image went viral and Ragu was famous. Posthumously. 'Who killed Ragu?' was that question raised again and again by people on Twitter and Facebook. This anonymous graffiti artist's work was shared over 200 times and the was retweeted over 422 times — leading to the starting of several petitions on change.org calling for a more detailed proper investigation into this death. Change.org's campaign has already mustered 862 supporters and people from as far away as the US are joining in.

Road accidents are already a major worry in Tamil Nadu — with statistics indicating that by May there had been over deaths due to road accidents in the preceding 3 months. K Raghupathi, a software engineer from the US had returned to his hometown Coimbatore on vacation and died after reportedly hitting a wooden arch erected for the MGR centenary celebrations.

Social media users have been trolling the EPS-led government in Tamil Nadu stating that the "Government had erased this graffiti art at a speed at which they NEVER react to issues faced by the common man."

With people on social media outraging against the political party for the death, a lorry driver who the police claim hit Ragu, has been arrested. Will he be able to answer the question 'Who Killed Ragu?'