UP, Up and Away: Prashant Bhushan, Aligarh Muslim University Students Union Prez called 'deshdrohi' by ABVP during 'peace' event at UP College for supporting Kanhaiya Kumar

At an event organised at a Degree College in Aligarh, UP, ABVP supporters caused a furore that required the police to rush the advocate and the AMUSU President off stage. No one has been detained yet

A whole day after ABVP activists caused havoc at the Dharam Samaj Degree Collge in UP — causing senior advocate and whistleblower Prashant Bhushan and the Aligarh Muslim University Students Union President to be escorted out under police vigil — no one has been brought to task yet. The UP Swaraj Abhiyan has issued a statement condemning the police and has called for some recourse.

What were they upset about? Well, in Bhushan's own words, he was speaking out against the Modi government and launched into a now familiar diatribe that people in UP took umbrage to. This is one of the first such protests that the ABVP has launched after Yogi Adityanath was sworn in as UP CM. 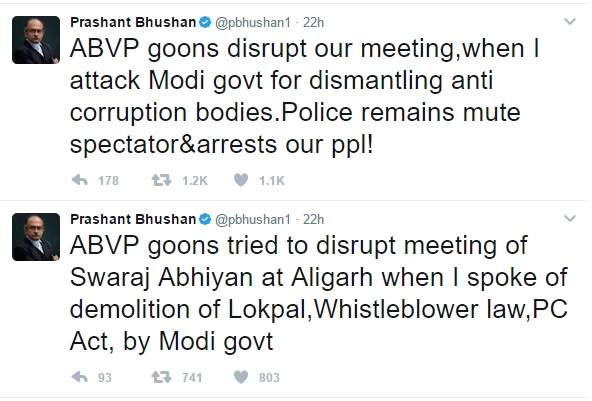 Lawyer Prashant Bhushan had to be escorted out of a college auditorium here by police during a seminar after ABVP activists allegedly barged into the premises and disrupted the programme. The incident took place yesterday when Akhil Bharatiya Vidyarthi Parishad (ABVP) activists protested against Bhushan at the Dharam Samaj Degree College, according to the organisers.  In his brief address, Bhushan had said that he was determined to bring out the truth behind the Sahara and Birla group diaries which were seized by the Income tax authorities.

ABVP is the student wing of the BJP. The activists also objected to the presence of the AMU students union president Faizul Hasan at the seminar. Sensing that the situation could go out of control, Hasan decided to leave the auditorium. Both the organisers and the ABVP have filed a complaint at the Gandhi Park Police Station. SP (city) Atul Srivastava told PTI that a case would be registered after due investigation. The seminar was organised by the Uttar Pradesh Swaraj Abhiyan on "Peace and corruption free India". 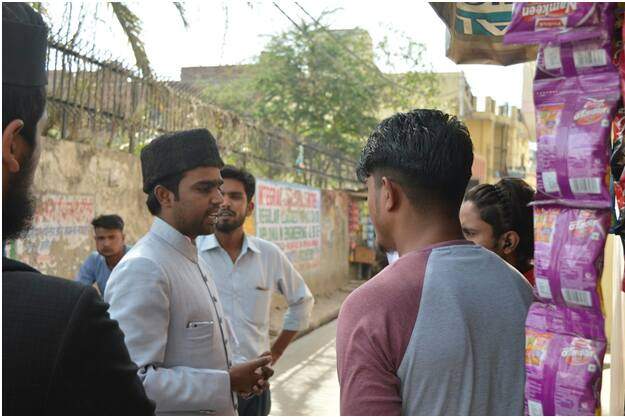 ABVP leader Amit Goswami told media persons that they had opposed the presence of Hasan at the college because he had supported the "anti-national stand of JNU student leader Kanhiya Kumar". He said people like Bhushan, who have taken "anti-national stand" on vital issues, are also not welcome.