Hyderabadi teen Srashta Vani Kolli just won a scholarship of Rs 50 lakh to study in NZ. This is how

Thanks to the Change the World Scholarship, Srashta Vani Kolli, who is from Hyderabad, will be spending as many as two semesters at the University of Wollongong in Wollongong, Australia

When Srashta Vani Kolli received the news that she had won the University of Wollongong's newest Change the World Scholarship, she was so overwhelmed that she screamed! "Even the neighbors came around asking," laughs the 19-year-old and we can still hear the excitement in her voice. And why shouldn't she be? This Hyderabadi youngster is the first-ever recipient of the Rs 50 lakh scholarship which enables her to continue her higher education in law at the University of Wollongong, Australia. She is currently pursuing her third year in law from REVA University, Bengaluru. "Graduation is an expensive affair and I am glad that through this scholarship, I will be easing off some of my parents' financial burden," she says with a smile.

Peter Murray - Manager, International Recruitment, University of Wollongong, Shelly Karnati - MD of Studypath International, and its branch head, Alekhya Som, were present at the ceremony where it was announced that Srashta had won the scholarship

The youngster had decided as early as the third semester that she would apply for scholarships and Study Path Consultants, based out of Hyderabad, offered her with professional guidance. Srashta strongly believes that apart from her convincing application and the two-minute video she was required to submit to win the scholarship, the fact that she is a teen poet who has published one book and is in the process of publishing another, was also a huge contributing factor. Her first book Wild Wings was all about dreams, "Looking back, maybe it was a little naive," she says sheepishly. She believes that her second book, Moonlight of the Noon, which, incidentally, she is releasing at Hyderabad's Annual Book Fair today, is about her love for the Moon because, as a child, she always loved looking at it. "All the themes are realistic and the poems are placed more in the present," says the youngster. All in all, there will be 80 poems in the second book. 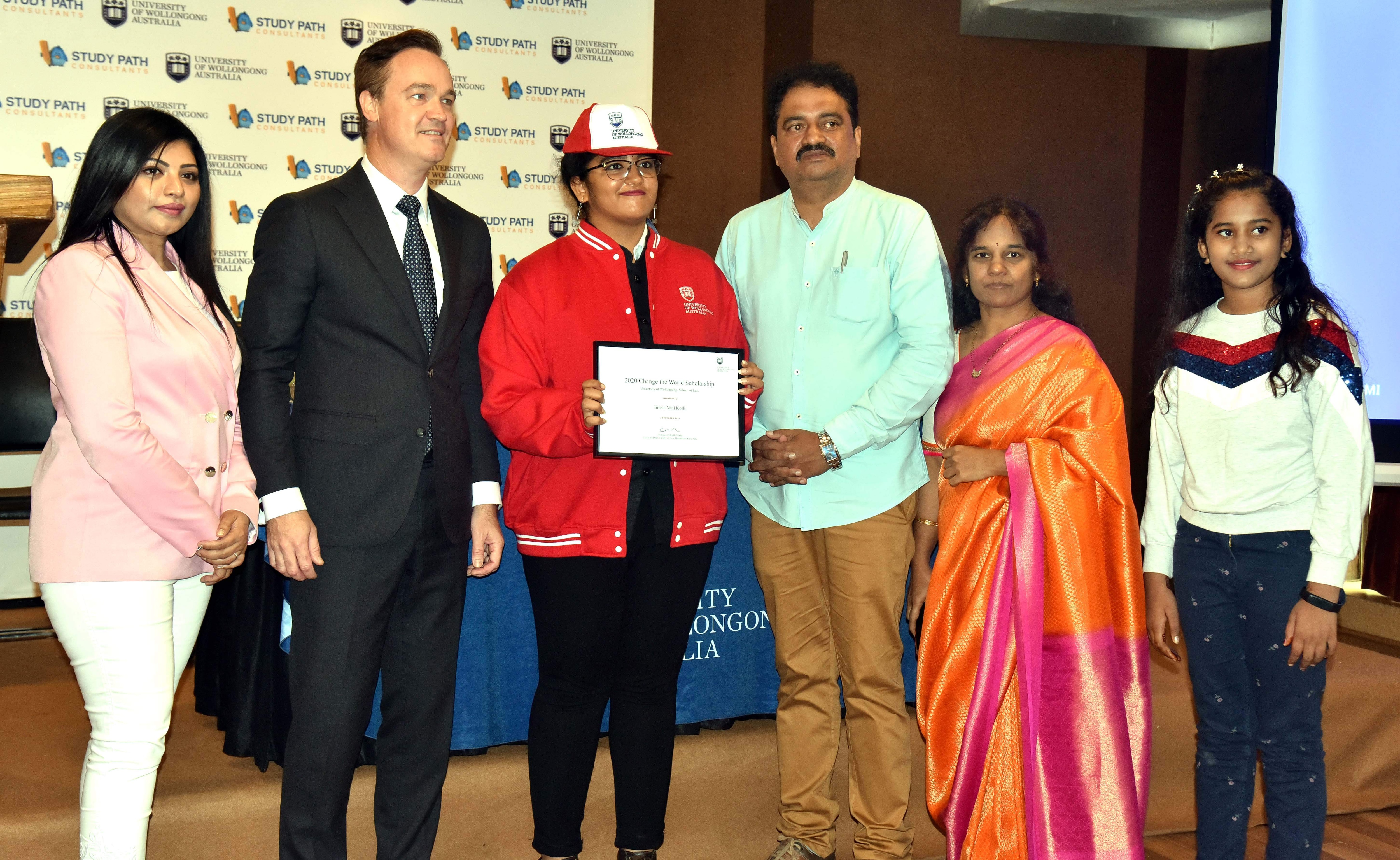 Dignitaries, Srashta and her parents at the event | (Pic: Srashta Vani Kolli)

Between her two books, she has worked on her writing style and now, ensures that the true meaning in her poems comes through in a more refined and mature way. Writing is an emotional journey for the young poet, "It helps me channelize my emotions and also helps me handle my situations better. Poetry is a very important part of my life."

Hunger, a poem by Srashta
I was born with an empty tummy
Never had food that is yummy
I played in a ditch, slept in my niche
Never had food to my stomach's fullest
Always had rice in its most driest
Soon is the summer approaching, fast is the fear creeping
I lost my brother last year, he died starving
I fear it is my turn this year
I was born in a family sinking in poverty
Shall close my eyes forever...drinking in the same poverty

For more on her, check out facebook.com/srashtavani.kolli