Madhuchandra HB has taught Kannada to over 3,000 techies in the past 10 years and has no intention of stopping anytime soon. The next batch will begin in January

Language is one way you can touch people's hearts, opines Madhuchandra HB, a techie based in Bengaluru. And proud of the language of his state, he has taught Kannada to more than 3,000 colleagues hailing from different states across India. It all started when he landed in Bengaluru from Bhadravathi and saw the non-Kannadigas struggle to speak or even understand what the locals spoke. Narrating the initial days when he started his classes, he says, "In 2009, I started classes to teach them basic Kannada, like introducing themselves, talking about their profession and what work they do. There were only four people in the first class, but then it increased to eight and finally, to 25 people. I felt that non-Kannadigas too should be given the opportunity to learn more than just basic Kannada to flourish in the state. So, I started teaching them more complicated words and phrases. Now, I have designed a proper syllabus."

Even though Madhuchandra moved on to different companies over the years, he has continued taking classes wherever he goes. Every batch has at least 200 people and by the end of the classes, they are all able to speak Kannada fairly well. "In a year, I conduct classes for up to six batches. If a person can understand basic Kannada, then they learn the construction of sentences, use of numbers and grammar within just ten days. I take classes every day after office hours. Most of my 'students' converse with me in Kannada only. The only way people can learn any language is by interacting and not by reading or writing," he explains. People often ask Madhu to teach them different directions in Kannada because when they travel around, it is easier if they can converse with the auto drivers in Kannada. He says, "Though I teach them, I also tell them to listen keenly to the announcements made in bus and train stations." 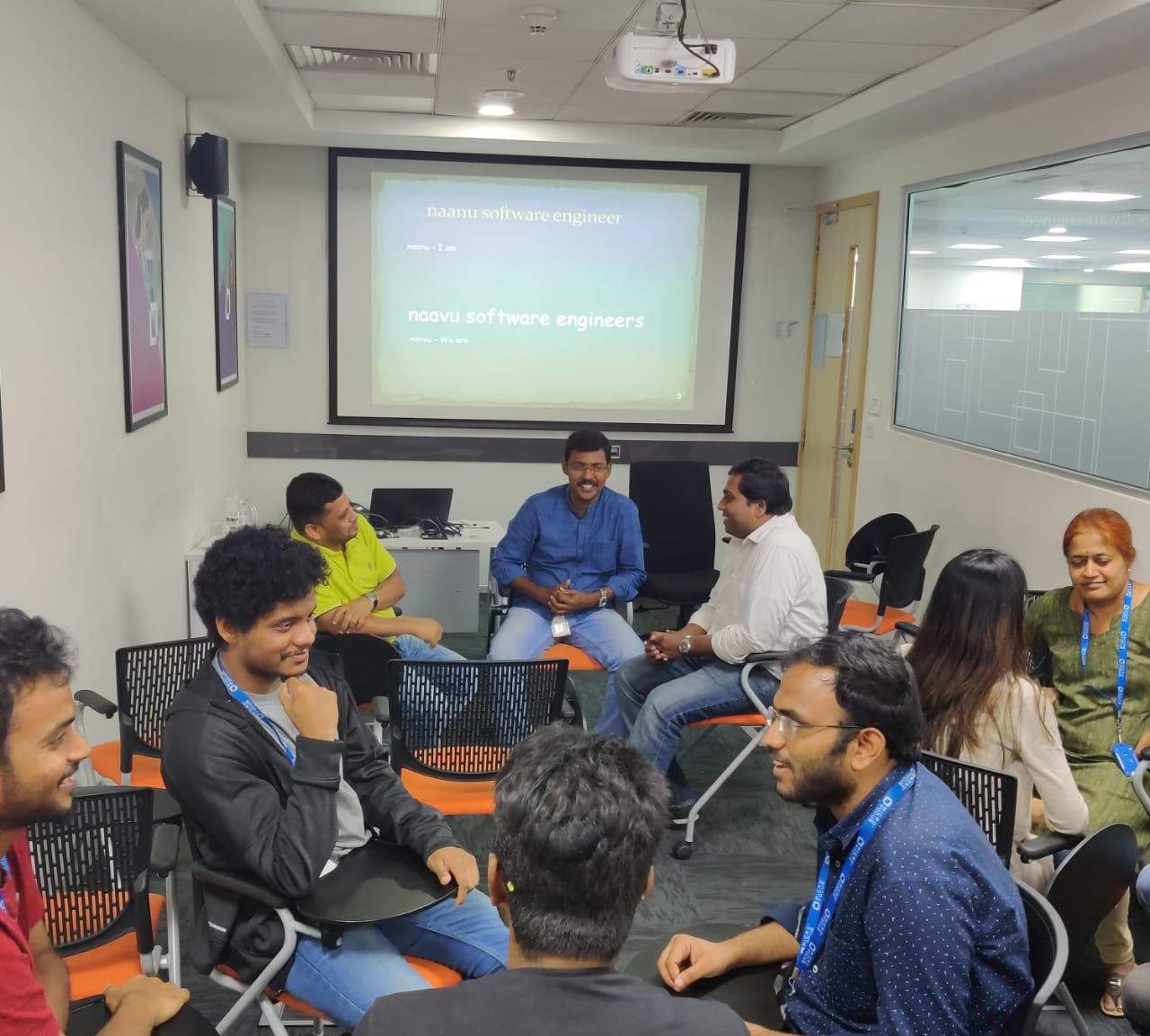 Madhuchandra's colleagues learn Kannada by conversing with each other in the same language (Pic: Madhuchandra)

When asked about his future plans, he says, "I just want to continue simplifying the language for people and make them understand it easily. I also want to reach more people. It makes me happy when people speak Kannada. Not just my colleagues, even other companies who wants to conduct CSR activities in villages reach out to me. By learning the language, they easily connect with the villagers," he concludes.

Some words that sound similar and have the same meaning in Kannada and in other languages:
The word 'Taayi' in Kannada means 'mother'. In Tamil, it is 'Taay'

'Tande' means 'father' in Kannada. In Tamil, it is 'Tandai'

'Niyama' means 'rules' in Kannada. In Hindi, it is 'Niyam'

'Ullangane' means 'violation' in Kannada. In Hindi, it is 'Ullangan'