The Chagaletty Children's Library is living proof that kids can do wonder. We speak to the youngsters who started the library for children when they were kids themselves which will complete a decade

It's a lazy Saturday afternoon. The children are home from school by 12.30 pm. After having their lunch, they rest for a while. And when the clock strikes 4 pm, they walk out promptly and make a beeline for the Chagaletty Children's Library. Chagaletty (which people sometimes pronounce  Chocolatey) is a village located 25 kilometres away from the Central Business District of Bengaluru. Ask anyone the way to Chagaletty and they will direct you with practised ease. Some places are famous for temples. Others for ancient relics. The villagers say that it was the library that made this village famous. You might wonder what is so special about this library. The answer is that it was started by the children for the children.

On August 14, 2010, six kids aged between 10-12 years came together and started this library in a small room. Today, they are grown-ups pursuing their degree or working in MNCs. Karthik N, Manasa V, Meghana C V, Shalini P V, sister duo Vedashree C K and Vanishree C K were the ones who laid the foundation for this beautiful library. As they take me through their old album comprising 10-year-old pictures, Shalini, who is working with Cognizant, narrates the tale of what led them to start this library. She says, "In 2006, the Child Rights Trust came to our school to create awareness on children's rights. We took up this programme seriously and formed a club called the Chagaletty Child Rights Club. Initially, there were 30 members in this club but people dropped out along the way. Finally, only six of us were left in the club. We would go door to door creating awareness about pulse polio, child marriage, etc. During our summer holidays, we used to walk all the way to Marenahalli Panchayat Library to read books. As we loved reading, it became tough for us to go that far to borrow books from the library. We felt the need for a library in our village, and so, we approached the Child Rights Trust (CRT) for help. They agreed on the condition that children should be allowed to run it." 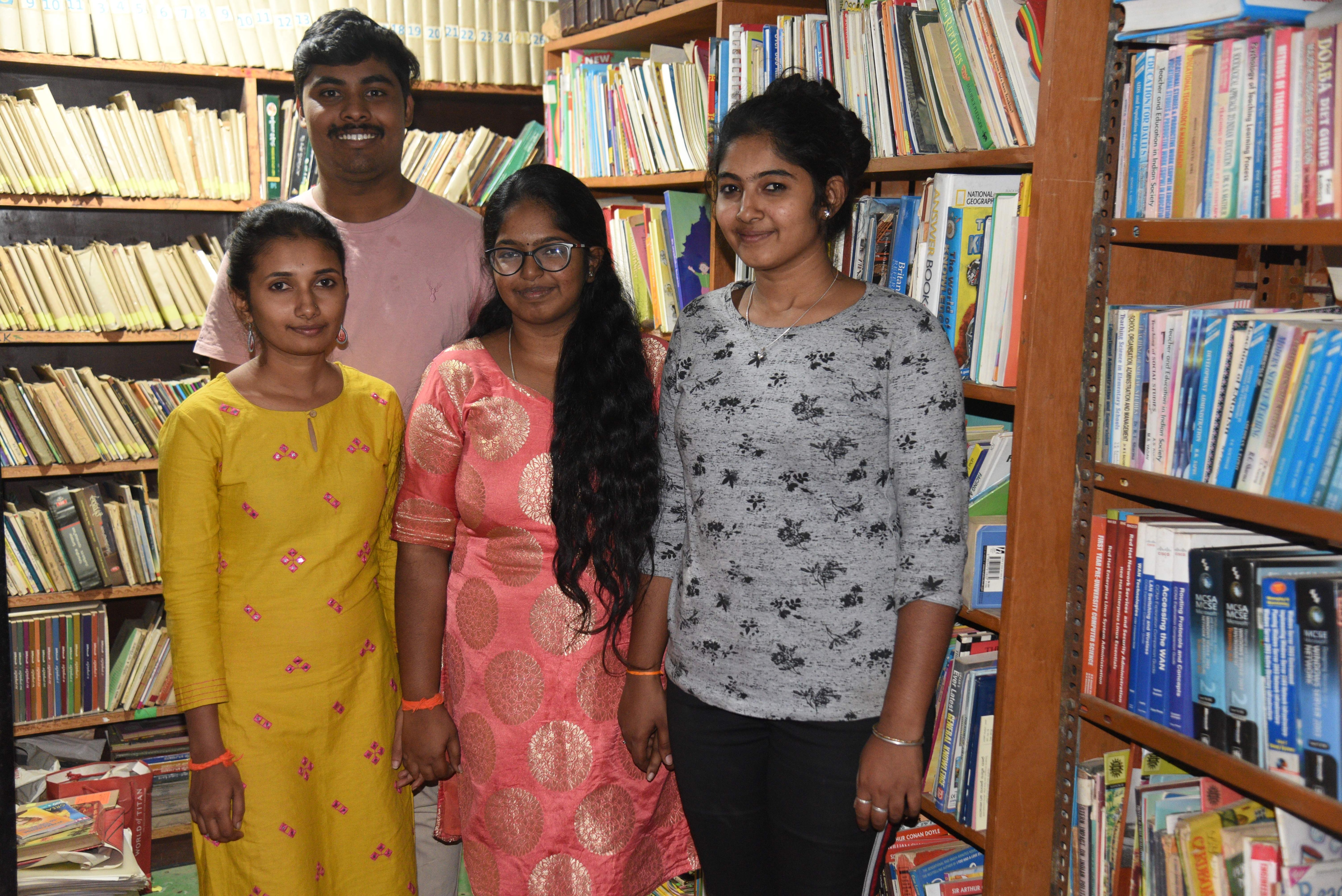 Karthik, Shalini, Meghana and Manasa are the founders of Chagaletty Children's Library

Shalini and her friends, though a bit anxious initially, worked out a plan to run the library. She recalls, "Since we are at school all day long, we would open the library around 4 pm. Initially, Hippocampus Childrens Library came forward to train us on the nuances of running a library. As we could not attend the session, Nagasimha Rao, who is Karthik's uncle attended the session for us. He later taught us how to maintain the register, classify the books, handle the books with care, attracting other children to read books etc."

Amidst all this, they began approaching people asking them to donate books to their library instead of throwing them away. Shalini says, "Whatever we have in our library today has been donated by people. We started this library with only 400 books and today, we have around 6,000 books. But the challenge was that everyone would donate books that were novels or history books. We would hardly get short story books or books that had pictures or illustrations. As people in the city got to know about our library, even private publishers came forward to donate books, and this time, we made sure we received books that had colourful pictures with stories and interesting facts." 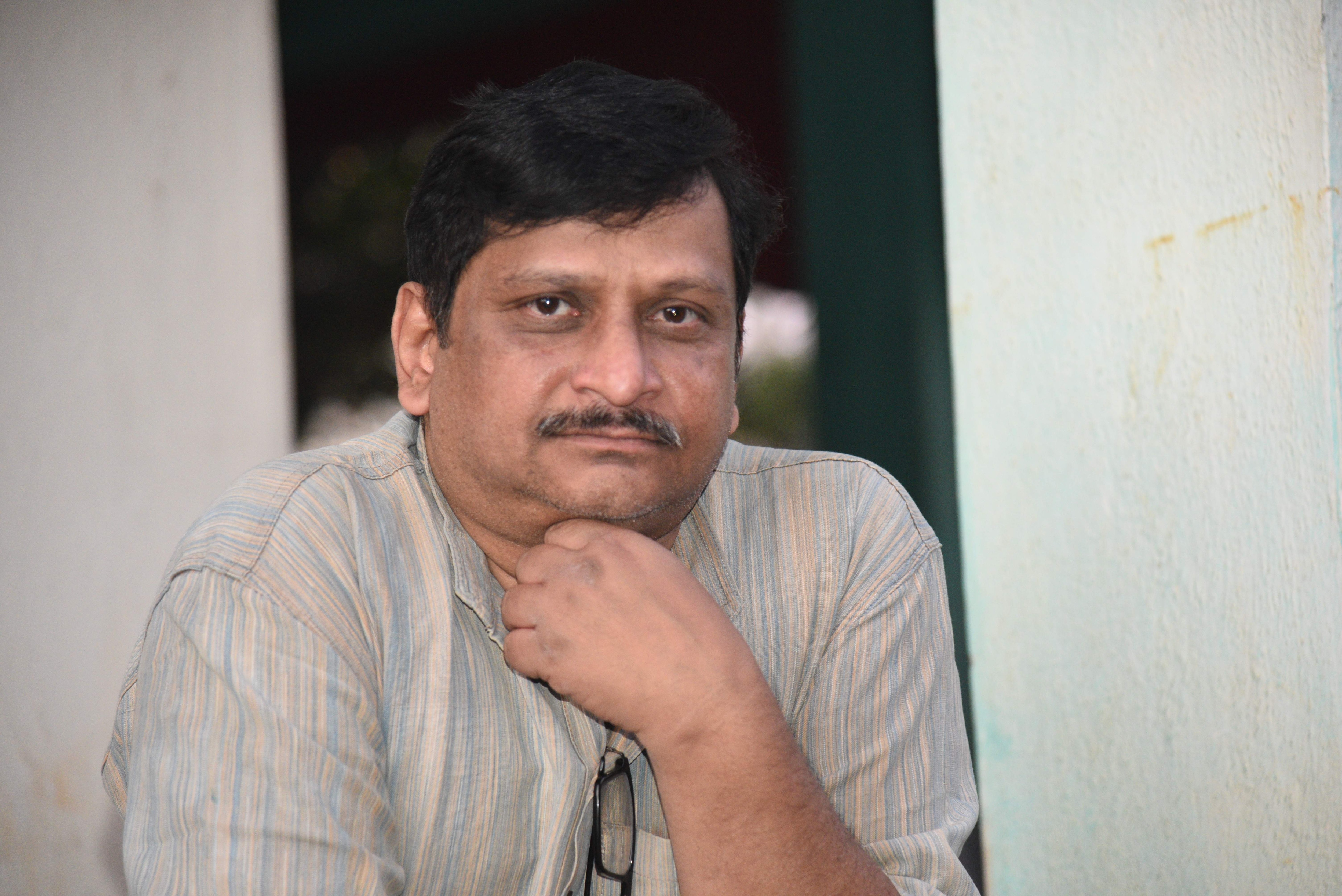 Nagasimha Rao, Child Rights Activist and the person who helped these youngsters establish their library in 2010

While their book issue was sorted, it was time for the super six to attract their friends and other children to the library. "Whenever we asked our friends to visit the library, either their parents would stop them or they would say it's boring to read books. Therefore, we invited parents to the meeting to make them understand that children's minds develop immensely by reading books. We also told them that children who have a hobby of reading books have an upper hand over others. And for our friends, we conducted various activities like games, running races and painting competitions so that they understand that the library is fun and not boring. To make it even more fun, we ensured that they sit anywhere within the library premises to read books and not just within four walls."

The art of GROW-BY Reading
The Chagaletty Children's Library has a unique concept called GROW-BY Reading — where colour codes indicate the level of books, by a person's reading interest. Here, the words GROW-BY indicate Green, Red, Orange, White, Blue and Yellow. While Green is meant for children who can identify pictures and drawings, colours including Red, Orange and White indicate readers who can read the book with fewer pictures in it. And finally, Blue and Yellow indicate books that are novels, literature, drama, prose and books that explain particular concepts elaboratively. Karthik N, who is pursuing BBA in Aviation Management says, "We label these books with different colours so that children can pick those particular books while reading. These colours are indicators for us to identify if the children have progressed in terms of reading books. We have observed that many children progress till the Orange and White levels. After that, their progress becomes slow. It might be due to the competition they face in school. But we make a point to reach out to such kids and tell them to come to library at least on Saturdays and Sundays."

A computer lab for kids
Last year, they also got two computers through a Corporate Social Responsibility (CSR) activity. All the children who were regulars at the Library were super happy and excited to see these desktops, touch and feel them. Now, these kids know how to operate the computer, create a Microsoft Word document, use calculators, use Microsoft Excel and much more. Karthik says, "Some of them have gone ahead and learnt how to make a Powerpoint presentation. The next academic year, we will be shifting these two computers to a nearby government school so that all the children can learn how to operate a computer."

Even now, the library is run by the same team that had started it. This August, as they hit the ten year mark, it is a wonder that all the children in Chagaletty spend their time reading books and discuss the books they have read. Karthik, who is looking to hand the responsibility to his juniors, is filled with cautious optimism, as he says, "We are training some of these kids to run this library but we are not sure about handing it over to a particular group. These kids must be ready to take the responsibility completely. Last year, we had trained a team but their parents were not sure if the kids will be able to do it. Hence, we had to drop the idea." 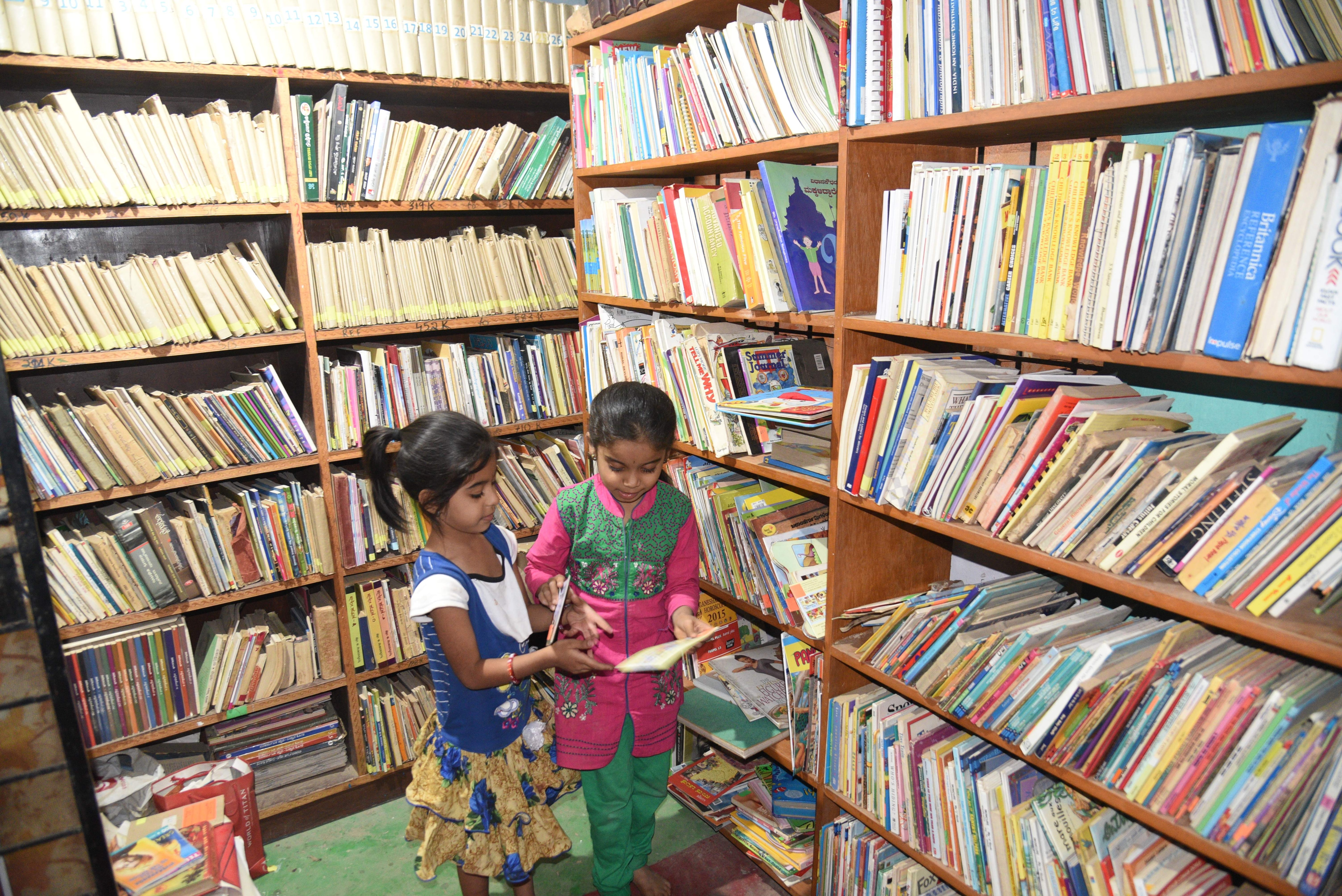 Kids select the books from the library

Model for many others
As the news of Chageletty spread across India, many people approached Karthik, Manasa and others to help them understand how to start a library for children. Shalini tells us an interesting story of how they helped start a library for kids at Mangala, a village near Bandipur. "Due to low enrolment of children at the Mangala Government School, the school was closed. The remaining kids were asked to travel to another village to continue studying. It was a real task for them to travel to the new school because they had to cross the Bandipur forest on foot. Hence, we helped them open a rural library at Mangala which later turned into a school. The same model was replicated in Chamrajanagar, Gadag, Sidlaghatta, Sindhagi in Vijayapura, Doddaballapura and a few other places. Everywhere, we were being invited as resource persons to help set up libraries. Our villagers were proud of us as we got recognised on bigger platforms." 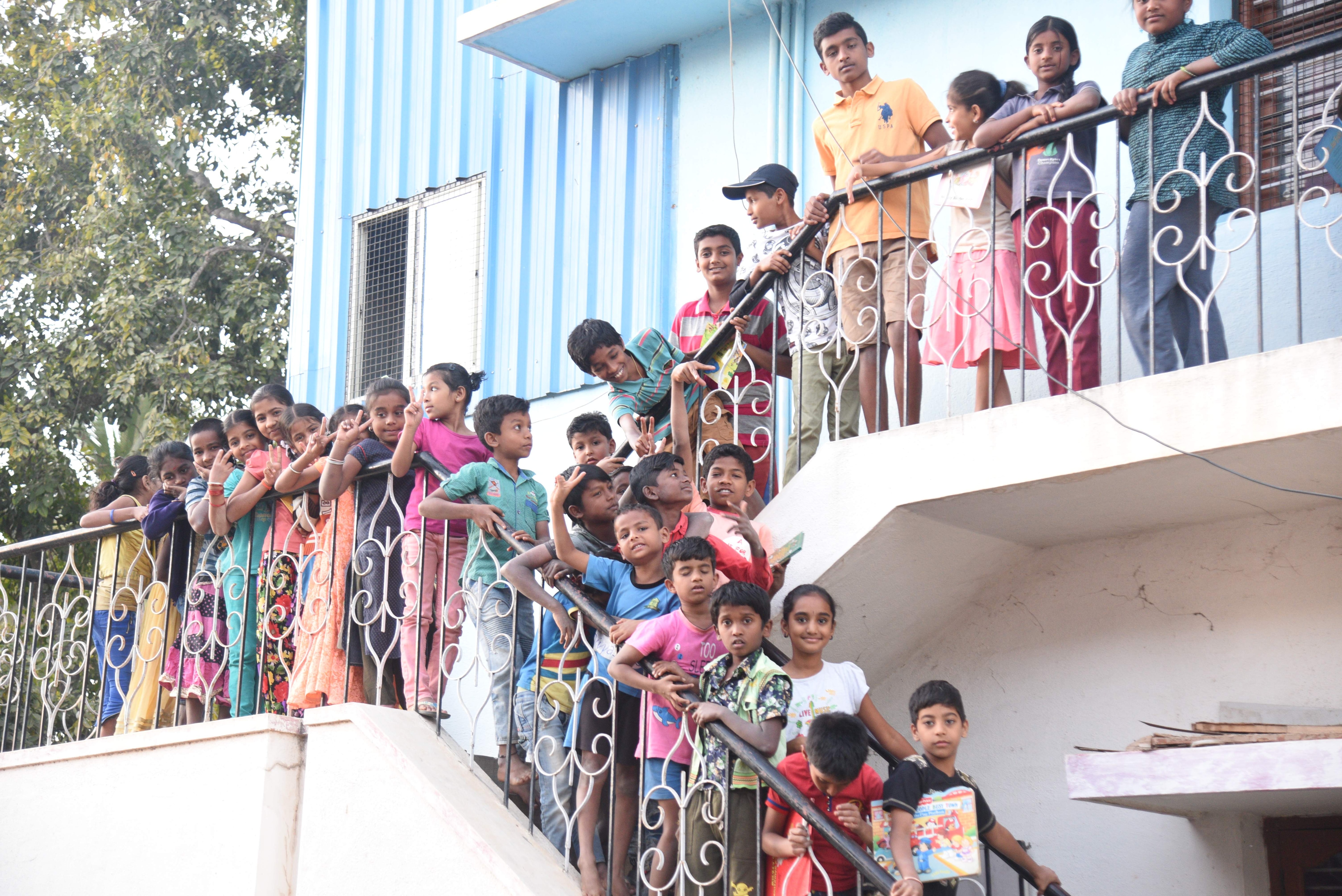 These kids are regular visitors to the library

Rule number 1: If a book is torn or damaged then children need not pay a fine, but they must bring a new person to enrol him as a member of the library

Rule number 2: When kids are enrolled as members, they have to pay only ten rupees for their badge. After this, the library does not charge a single penny

Rule number 3: Every first Sunday of the month is a day to discuss and analyse the books children have read

Mobile Library
Every month, the library members go to nearby villages and government schools. They give books to children who are interested in books. After a few days, they collect the previous book and give them another book to read