What will happen to board exam-bound Class 5, 8 students in TN if they don't get a community certificate in time?

Even though every child seems to have an Aadhaar card today, acquiring a community certificate is still a herculean task for most students in the state. But is it possible to get one before the exams?

Ever since the Tamil Nadu government's School Education Department announced board exams for kids in classes 5 and 8, students, teachers and parents have been caught in a whirlwind. Every other day there is new circular, new rules, new directions and new reasons to panic for all the three stakeholders. The most recent cause for panic was the state's demand for all students to submit their community certificates to be able to attend the exam.

Even though every child would appear, in theory, to have an Aadhaar card today, acquiring a community certificate is still a Herculean task for most Scheduled Castes and Tribes in the country, explain educationists. Activists say people end up spending months and even years trying to get their community certificates. So asking for a caste certificate from a 10-year-old is an almost impossible demand, they say. The Tamil Nadu government announced on September 13, 2019, the introduction of board exams for Class 5 and 8 students for the academic year, 2019-2020  The proposal for the same had been made in the New Education Policy draft which has not been finalised yet. However, the School Education Department issued a circular stating that students will not be for the next three years, meaning from 2022 the students who fail would be detained. Is it that difficult to get a community certificate?

From corruption to caste discrimination to inefficiencies, the applicants face a range of problems em route to getting the certificate."In Tamil Nadu, there are approximately eight lakh ST people and only about two lakh people have their certificates. People end up spending decades standing in lines to get their certificates, so to expect young children to have them is just cruelty," said R Revathi, Director, Vaanavil School in Nagapattinam that caters to tribal children and also nomadic tribe children.

Revathi says that she also helps students get their certificates before their board exams in classes 10 and 12, "I've seen how much students struggle. How they have to run from pillar to post. I've seen them lose out on seats because they are not able to produce the certificate. During admission time, we always have students going on protests and begging for help in front of the media. And most students don't have people like us to help them, so where will they go," she questioned. She believes that making such demands from such young children, will result in them dropping out of school entirely. "If the state wants to ensure education for all then they should make the environment conducive for the children," she added.

Why it can take years, not just hours

Revathi says that both parents and students "go around in circles" as they are pushed from one centre to another, one office to another trying to get the certificate. "Some parents can't leave their jobs even for a few hours. And here, in the offices, they want people to come over and over again, so how can these parents stay away from their work for so long? They're completely dependent on the day's wages for everyday needs. That is why this feels like a targeted attack on STs," Revathi says. The educator says that in this case, the people from Scheduled Tribes are more disadvantaged than people from the Scheduled Castes because the SCs find it a little easier to get their certificates. "SC members were slightly ahead of the ST members when it came to getting certificates," she added.

However, for tribals, especially the nomadic ones, it is almost impossible to get a certificate. "There is a lot of caste discrimination as well and abuse, so people don't even want to go there," another activist told us. Therefore, to demand these certificates from little children is extremely unfair and will give the marginalized students a definite set back, the activist added. 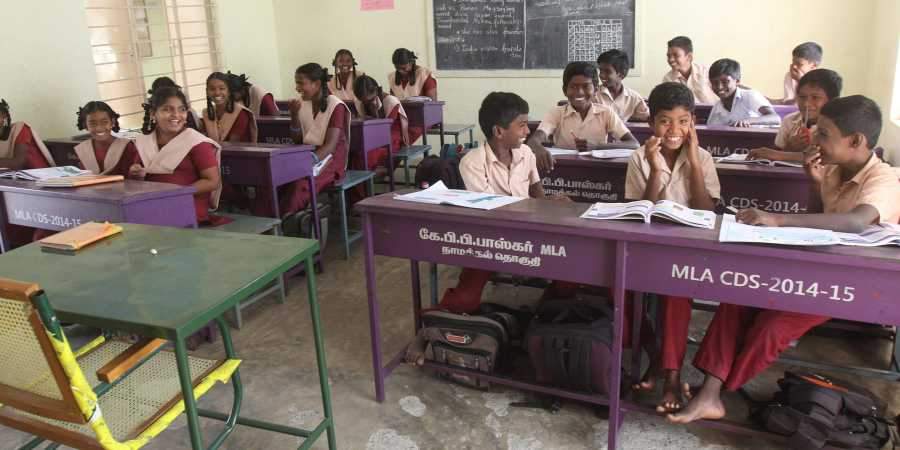 Teachers have no say in the matter

Some government school teachers said that they had heard that the caste certificates were not being demanded anymore but were not sure about it. But the teachers also add that they are not really sure about anything these days with the way the state government and education department is sending out Government Orders  "One day it's something, the next day is something else. There is no clarity at all with any of the rules. I think they send out a notice and wait to see how people will react and then change it accordingly," Ravi K* from Chennai said.

Some of these government teachers were protesting against pension cuts, NEP and other recent policy decisions by the government, at Chepauk in Chennai. Interestingly, none of the teachers we spoke to would risk sharing their phone numbers, let alone mention their names in this story, out of fear of their losing their jobs, "Ask us whatever you need to right here," the teachers tell me.

Whose rules are they anyway?

Speaking about the loss of clarity in these new rules that change everyday, the teachers say that the government did the same thing with exam centres. The schools were told that there would be select centres for the exams and students would be assigned a centre. However, that rule was then overturned. "The government can't ensure the safety of the children while they are travelling to and from the centre. So now they've said the exams can be held in the school itself," another teacher said. "God knows what GO will come tomorrow," another government school teacher from Chennai said, laughing sarcastically. Some other teachers have complained that it is difficult to suddenly teach the child a year's entire portions, when they are not used to it. "There is a lot of pressure on teachers at this point too because of all this confusion," a teacher from Madurai said. Some teachers say they don't mind the syllabus but say there isn't clarity again on the syllabus, about if it's just two terms or three terms.  "We can teach the students, that's no problem but we should be told clearly what they are to expect," she added.

The exams itself, are something the teachers are not happy with. "There were already exams and tests we were conducting, so were they not valid?" a teacher asks. The teachers all believe that the exams will put undue pressure on students as young as 10 who simply don't deserve such stress. "I tried to not make it a big deal in my class, so that the students can remain calm. So if you ask anyone in my class they are mostly fine. But the problem is that the parents know that these are board exams, so now students are coming up to me and saying that their parents are stressed out and they ask me if it is really as scary as it sounds. And I try to reassure them that it's not," Raj S* said.

The teachers are certain that this could lead to an increase in drop out rates. "Out of fear itself, the children will drop out. Or they won't be able to study properly. Fifth standard children are basically still babies. How can one you pressure them?" Govind N* from Villupuram said.

Tamil Nadu is first in this too. Wait, is that a good thing?

The teachers are especially annoyed by the fact that Tami Nadu is the only state in the South that agreed to the class 5 and 8 boards, when no other state had accepted it. There was absolutely no need to hurry, the teachers say. "We could have waited to see what the other states would do. If all states had accepted it, we obviously would have no choice. But why did we not wait? Why did the state government jump into this with such haste?" Ravi asks.

Revathi also feels that there is absolutely no rationale behind this decision. "This is an absurd decision, the government has simply not taken into consideration how this would affect the rural communities where accessing education itself continues to be a big deal. Whats about migrating children, first-generation learners, children from socially and economically backward backgrounds or even children with learning difficulties. How can we put these children on par with the others? Is this necessary?" the Chennai teacher questioned. 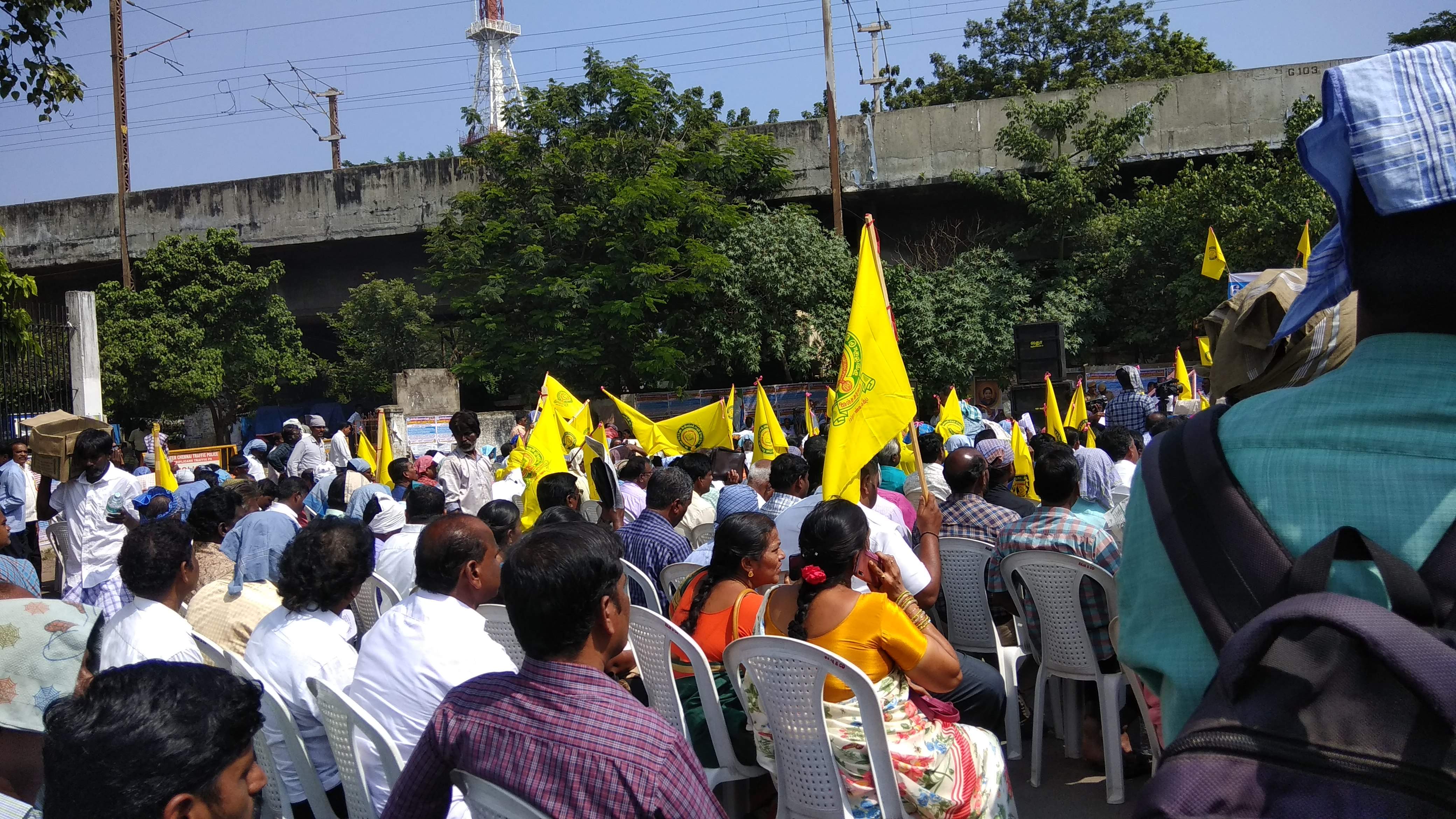 Government school teachers at a protest in Chennai

Segregating children at the age of 10, scaring them with concepts of exams and failures is going to result in a huge setback for marginalised students, she adds. A GO did state that students will not be failed and will be able to move on to the next grade for three consecutive years, so will students be faced with failure, we ask Revathi. She also echoes the words of the government teachers — no clarity. "But at the ground level, if you notice, children are all talking, they are discussing the exams constantly. They are obsessing over it and are worried. How did this happen? We've already ended up putting them in a pressurised situation," she points out.

Who is the exam for, really?

Many feel that the exams are just a way for the education department to keep a check on the teachers to ensure their classes perform well. "In classes 10 and 12, schools are able to produce full pass percentage but that's not happening in the lower classes. So I think the government thinks that by putting pressure on teachers to ensure 100 per cent pass figures, they can ensure better learning. But that's not at all why students are not performing well. There are various other reasons," Krishna K pointed out.

Revathi feels that this might not be a targeted attack on teachers but agrees that there are various other factors of the education system that the government should actually be focusing on. "Exams are not a fix for these problems whether it be a lack of ability to read or develop skills. Exams are NOT the solution," she feels. More than an attack on teachers, Revathi says this is a direct attack on the children themselves. "At the end of the day, it is the child who will suffer more than anyone. The state has to take responsibility for the child's education. They cannot push children away from the system," she explains.

Not having the certificate could mean two things — either the student will not be allowed to write the exam or they will be forced to register as an Open Category candidate. However, the already tiresome process of getting a caste certificate will get all the more impossible, with the certificate being harder to acquire later on in life. This could also mean that for the rest of their lives, the children could be deprived of the rights they possess as oppressed communities.