The university management also said that, those students who violate this code of conduct will be fined and their parents will be called to the university

The administration of a university in Pakistan imposed a ban on male and female students asking them not to roam together or have unnecessary meetings inside the campus. According to the notification issued by the varsity management of Bacha Khan University in Charsadda, Peshawar, male and female students hanging out or dating is 'un-Islamic' and immoral while warning that strict action will be taken against those wandering together on campus.

The university management also said that those students who violate this code of conduct will be fined and their parents will be called to the university. The notification to this effect was issued on September 23 by the administration. "It is hereby notified for the information of all students that the unethical activities around the university are in surge, undue/un-Islamic/uncultural relationships are strongly discouraged. Let the students be very clear that coupling of male and female students is not allowed, if students are found anywhere in the campus coupling, strict disciplinary action would be taken against them. The parents of the students would be called in to the university and fine will also be imposed. Hence, therefore, to avoid any untoward situations, no male and female students' correspondence should occur," the notification stated. 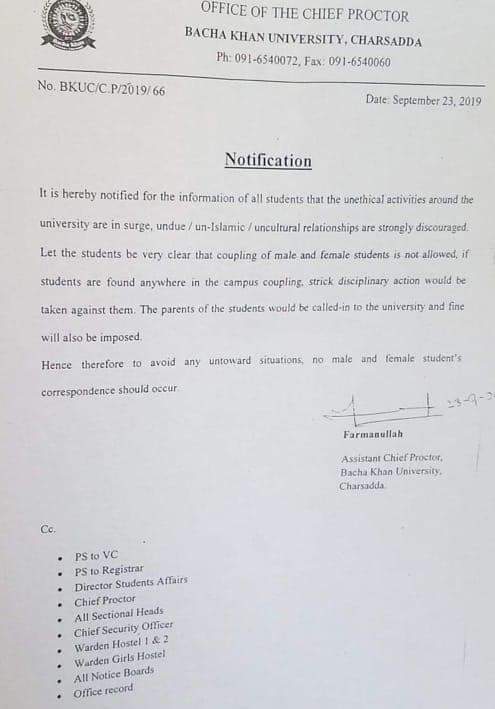 Assistant Proctor Farmanullah told MENAFN - Tribal News Network in Pakistan "unnecessary gatherings of male and female students will never be tolerated in the university premises." He said that the decision to ban such activities has been taken on increasing complaints of parents of students. He added that it was taken in best interest of students to ensure discipline and keep the students focussed on their studies.