We would never hurt our VC, JU students on indefinite sit-in ask for student election

Students of Jadavpur University are on an indefinite strike demanding student union elections be held at the earliest before the Gandhi Bhavan in the campus. There has been no student body election in the university since 2017. The students have also rubbished the claims that the students had anything to do with the Vice-Chancellor, Suranjan Das, being heckled and even physically assaulted.

The Vice-Chancellor claimed that he was heckled and manhandled by a section of students agitating over the issue of holding students union elections in the varsity on February 19. "We were asking some questions about why the Executive Council meeting was dissolved without talking to the protesting students. Trinamool Chhatra Parishad goons started the brawl. He might be manhandled by them. We didn't hurt him," said Debraj Koley, a second-year postgraduate student of the Department of Film Studies. 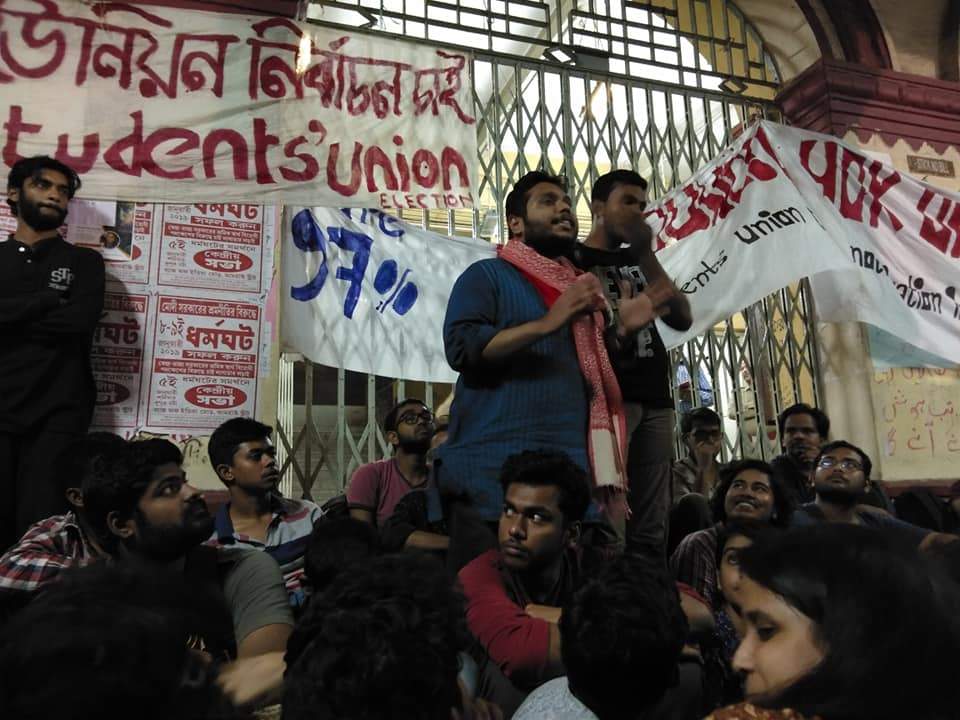 Indefinite Protest: The students say that the sit-in protest in front of Gandhi Bhavan will continue untill their demands are not met (Pic: Facebook)

Das told the media that he was manhandled as he was trying to board his vehicle after attending the meeting. "I feel very insulted. This had never happened to me in the past. I am now on way to a hospital. I feel shaken over the developments. The students just blocked my path and turned aggressive even as I was trying to say that I am ready to speak to them but in a proper manner," Das said.

Almost 97% of the students had voted against the government’s decision to replace “political” students’ unions with an “apolitical" students' council. "It is very unfortunate that the V-C is being used for the state government's propaganda. We understand that the university administration will not be able to take any action on its own. We have two immediate demands that they can meet. We want them to apologise to the students for accusing us of things we never did and painting such a negative picture. We also want the university to organise a tri-party meeting with the students, university and the state government present," added Shounak.

The students have been demanding an election since August 2017 and they say that there has been not one incident of violence till February 19. "Why would we resort to violence. Not only would such an action be against the spirit it would also work against our cause," said Shounak Mukhopadhyay, a second-year student of the Department of Film Studies. "We would never beat up our V-C, no matter how much difference in opinion we have. We were peacefully having a conversation with him just before he was getting on his car. Suddenly the TMCP students got into the argument and provoked a scuffle. The V-C left the scene and went back to the building. At no point did we see him fall down. After some time he came back out in a strecher and was taken to AMRI hospital in the university ambulance."

Debraj Debnath of the Arts Faculty Students' Union claimed the VC's security guards tried to physically remove their members, including girls, as they tried to speak to the V-C. "Four to five of our members were injured. We have no idea if the VC got hurt in the melee," Debnath said.