Addressing a large gathering outside the university's gate number 7, Kanhaiya said people should be more worried about the NRC

Students of Jamia Millia Islamia had a busy day today. The newly formed Jamia Coordination Committee (JCC) that has brought all concerned students, teachers and alumni under one roof, conducted a peaceful march across the campus on International Minorities Day. A bench of the Women's Rights Commission was reportedly on campus to speak to female students who were victims of the police excesses on December 15. Former JNU Students' Union President and National Executive Council member of Communist Party of India, Kanhaiya Kumar joined the protest outside Jamia and said the demonstration was not just a fight to protect Muslims, but to protect the entire country. 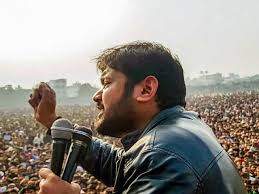 Addressing a large gathering outside the university's gate number 7, Kanhaiya said people should be more worried about the NRC, which he said was much more dangerous than the controversial Citizenship Act. The crowd erupted in cheers when Kanhaiya said the protests against the citizenship law would go down in history "as the one that saved the Constitution".

"If the NRC is implemented pan-India, we all will have to stand in long queues like the demonetisation days," he said. Kanhaiya underlined that the amended citizenship law and the NRC should be protested tooth and nail, but it should not veer off the path of peace. "We must ensure we remain in our senses while trying to maintain the same level of energy. Remember, we hold pens and not AK-47s," he said adding that those who are trying to protect the Constitution were being termed "anti-national" and those who are destroying it are calling themselves "patriots".

People from various minority groups, mostly Muslims, gathered outside the university to protest against the Citizenship Amendment Act 2019 and the National Register of Citizens (NRC) peacefully. The Jamia Teachers' Association (JTA) also took out a march against the police brutality on campus and in solidarity with the students. "All the protests today were peaceful. Even though there were police postings at different spots they were dormant throughout the day. No one other than students were allowed inside the university," said Sumedha Poddar of the Humanities Department of the university. The JCC, formed late night on Tuesday, has called to consolidate students organisations, activists, students and alumni involved in the protest.

(With inputs from PTI)