Protesting to regain dignity as Muslims: 700 AMU students slapped with FIRs, 25,000 on hunger strike against CAB

About 25,000 students from Aligarh Muslim University have been on a hunger strike since December 10, in reaction to the Citizenship Amendment Bill being passed. The police have filed an FIR on 700 unnamed students and 20 students were named for allegedly violating Section 144. However, the students maintained that they were not aware of the section being imposed in Aligarh.

The dining halls of the residential campus remained empty last evening as students gathered together to protest the Bill. Perhaps taking inspiration from JNUSU, the AMU students also issued a 'show-cause' notice to their Vice-Chancellor and the AMU Teachers Associaiton, demanding that the administration stand with them or they will assume that that administration is in collaboration with the establishment and would then face a boycott from the students.

The students have given the administration till the end of the day to respond to their notice, failing which they have said that they would consider them as supporters of the establishment. "It is no secret that implementing CAB, 2019 is a well-planned Nazi-esque bill that the right-wing terrorists have tabled in the parliament of India. It is aimed at degrading the Muslim community to not only second-grade citizens but also lay a platform for genocide, concentration camps and complete annihilation of Muslims of India," the students said in their notice. 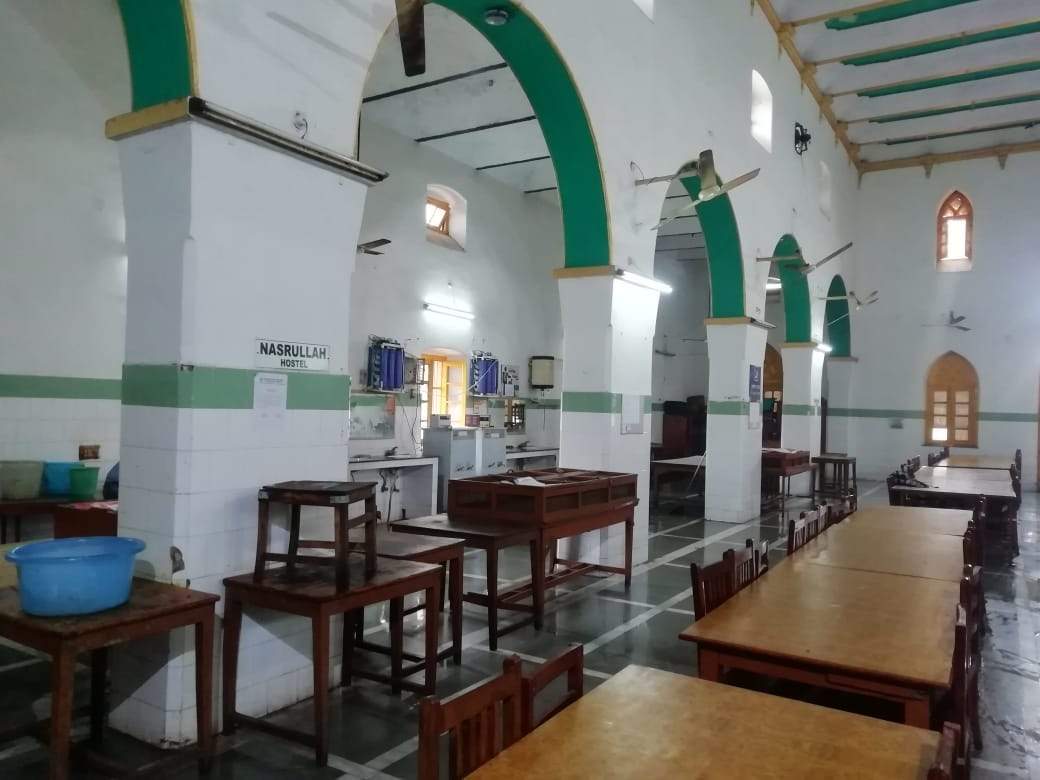 The empty dining halls at AMU

"It is a collective failure of the faculty that it has yet to make a strong stand on the issue. Holding you responsible for this failure, this is a show-cause issued to you by the students. We give you an ultimate of 24 hours (6 pm today) to support us or we will boycott all members of the faculty," the students wrote.

This morning, the students woke up to the news about the FIRs, they were not intimidated about it and only read about it in the paper. "It was only in the newspaper that we found out that Section 144 had even been imposed here. Nobody told us and now suddenly, they say that we've violated a law that we did not even know was imposed here," a student who has an FIR registered against him said. The students said that this was, however, not just a protest against CAB and NRC, but also against the UAPA, abrogation of section 370 but above all, it was a fight to 'regain their dignity and self-respect' as a community, "There have been instances where mobs have set out to lynch a Muslim because they suspect him of some kind of wrongdoing and when they find out its a Hindu man, they let him go. They wanted to beat up the Karachi shop owner but then found out he was Hindu and left him. There are 100s of such examples. So what we are doing now is a fight to regain our dignity and self-respect as a community," he said.

When asked if they fear getting lathicharged or if they fear action from the state or administration, but the student said they don't, "We have been oppressed so much over the last few years that we don't have any fear. Our protest today is to remove fear from the consciousness of Muslims. We want to set an example and so we have started from our campus," he said.