His many workshops, sessions and training programmes are directed at helping children achieve their best potential, and guiding parents to be more than just spectators in their children's lives

Most of us may have crossed paths with people who completely regret the career path they have chosen, lamenting that they did not get to pursue their passion and cribbing the rest of their days away. They don’t say, ‘If you love what you do, you’ll never work a day in your life’ for nothing and making this message loud and clear to parents is Chennai-based John Pradeep JL, who is India’s first theatre-based life coach for children and parents. It took 15 years for John to figure out what he really wanted to do in life and now, he does not want others to wait long for that realisation to dawn upon them. He believes that every child is good at something and that their skills need to be developed around their area of choice through proper guidance.

We can understand that children need guidance, especially if they have to figure out their area of interest with respect to choosing a course that would steer them towards their career goals, but why include parents? “Parents are an essential part of children’s lives and if I coach children and send them home to their parents who may not be on the same page with them, then all my training and guidance goes to waste. This is why I hold sessions to benefit both the child and their parents. One is not mutually exclusive of the other,” says John, who tells us that he has designed an array of programmes that includes theatre training, personal coaching and theatre performances to help children grow up to be responsible and well-rounded individuals through theatre that takes lessons from varied experiences and struggles that he went through in life – from being sexually abused as a child to figuring out that theatre was his true calling at age 27.  Excerpts from an enriching conversation:

How exactly did you discover that you could use theatre as a medium to help children?
I was 27 when I figured out that theatre was what I wanted to pursue in life. I used to be part of the drama team in school, regularly performing in plays. I remember being so passionate about it that even being sick could not stop me. But my parents wanted me to become a doctor and so I put my theatrical aspirations on the backburner and continued focusing on my studies. But unfortunately, I was not able to secure a seat in a medical college as I had initially planned. So, I took up Physiotherapy instead but quit it a few months later. Then I took up Biotechnology and became a part of my college drama team in Tiruchy. Even though I was actively a part of it and was getting rave reviews for my performances, I did not think of it as a career option. Later, after graduating in Biotechnology, I took up a job at a call centre in a bid to become salaried and independent. That did not work out and I went ahead to pursue an MBA. I did not like it and went to work at a training centre. Again, it was not what I was interested in so finally, I went to work in a Montessori school where I received training and also learnt how to interact with children. I did not receive any certification but I was able to develop a theatre-based curriculum for kids. I moved to Chennai from Tiruchy soon, finally understanding that I wanted to combine the two greatest loves of my life – theatre and children. I took up a job at Evam’s Happy Cow, the children’s division of Evam Entertainment, and I have not looked back ever since. John Pradeep JL at a Bridge session for parents and children

Could you give us an overview of the programmes that you conduct?
I conduct a range of theatre-based programmes for children of different age groups, through puppetry, shadow theatre, clowning, mime, plays and also good-old conversations! The first programme is called ‘Happy Children, Happy Families’ for toddlers and their parents. The main aim of this programme is to devise a proper routine for kids, wean them from technology and help them learn kindness and gratitude. The second programme is for pre-teens and teens called ‘Real-life Incredibles’ where I identify their core passions or strengths and nourish them with hand-holding and a lot of guidance. I encourage them to give back to society by making use of their passions. For example, if a child is very good at dancing and also believes in leading a plastic-free, zero-waste lifestyle, then I encourage the child to choreograph a dance routine that inculcates the message of living a ‘green life’ and perform it at their school to create awareness. Yet another programme called 'Bridge' is a platform for both teenagers and adults to start conversations about uncomfortable stuff. It is a safe space for them to talk about any traumatic experiences they have had or even something that they have never shared with anyone before. I believe it is a great opportunity for both parents and kids to get different perspectives on life and expand their minds truly.

Do you believe that both parents and children should have support systems of their own?
Yes, of course! I think that parents have a tendency to think that they are enough for the child and there is no need for anybody else to interfere in their child’s life but that is so problematic. In fact, through my ‘Real-life Incredibles’ programme, which is inspired by Disney’s The Incredibles where each family member is a superhero, I encourage parents to designate trusted adults as their children’s mentors. Supportive peer groups for both adults and children are necessary too so they can have age-appropriate discussions. Both parties (children and parents) should never feel like they are alone. This concept is also inspired from my life. I was sexually abused as a child and did not tell anybody of my ordeal because I did not have a support system. I was scared. I do not want any child to go through the same horrors that I went through and I strongly believe support systems can help because the child will confide in someone or the other, if not the parents. 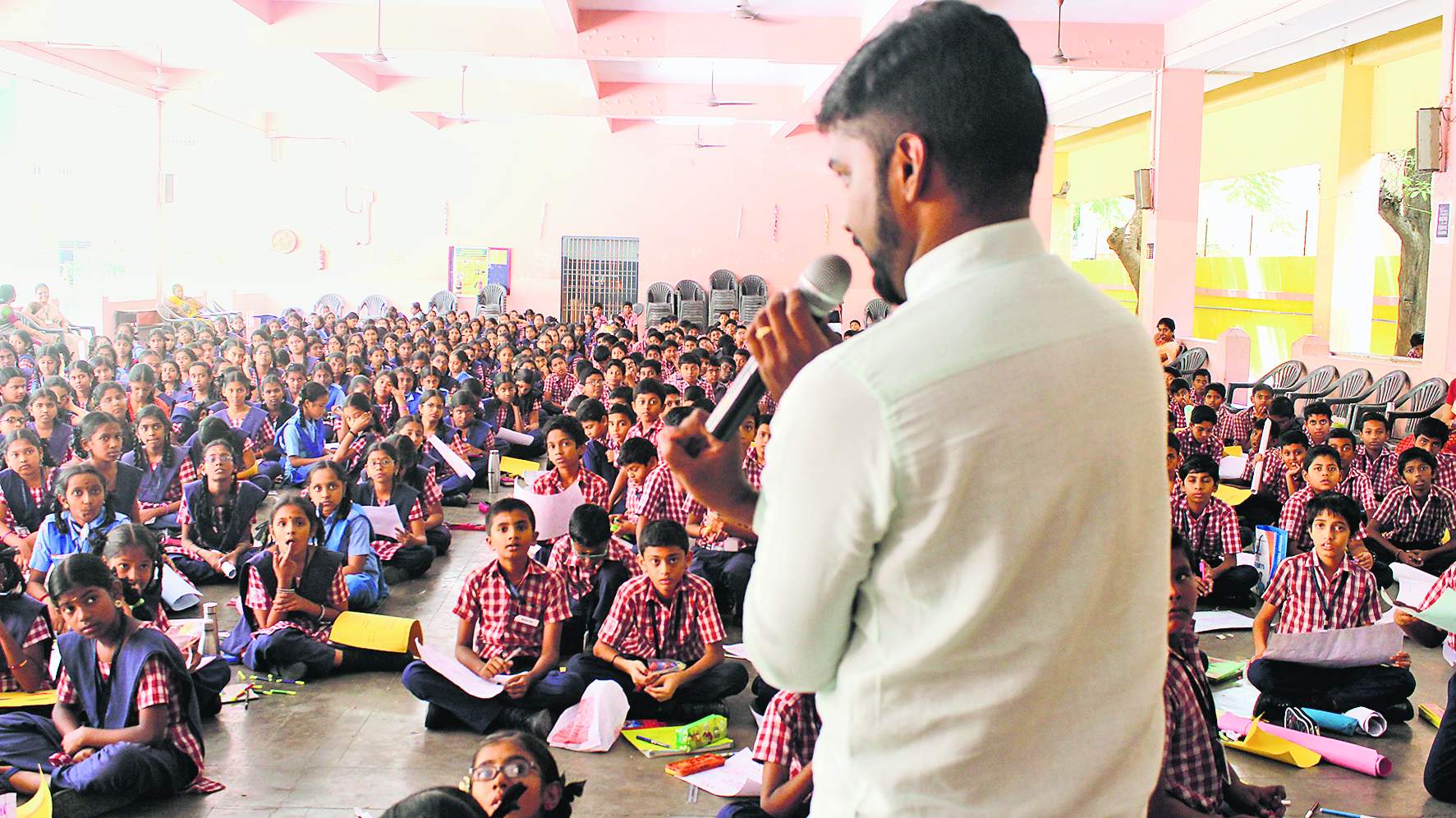 Tell us about the theatre performances that you conduct at schools. How are they helpful to children?
Currently, I have four shows that premiere at different schools and other organisations, out of which two are clowning shows that are just meant to provide pure entertainment. My play, Oru Oorula revolves around a father telling stories to his daughter every single day without fail. What is so great about that you may think – but the fact I want to emphasise on is that this storytelling session not only helps strengthen the father-daughter bond but also helps set a proper routine for the child. This is based on the storytelling sessions that I have with my 6-year-old. She cannot sleep without listening to my stories and it has helped in stopping her from falling asleep to YouTube videos that many children do these days. Yet another play is titled The Greatest Fairytale Ever, which has been devised to break stereotypes set by all fairy tales – the princess waiting for the prince to come save her or the notion that all stepmothers are evil. I think it helps children get an unbiased view of stories that will help them become non-judgmental.

What do you think are the causes of the problems in the teenager-parent relationship today?
First of all, I think parents should realise the fact that most problems that they think they have with their teenagers are not problems in the first place! Teenage is a time when the children are suddenly identifying themselves as individuals and a lot is going through their mind and body already. They are at conflict with themselves, so obviously they may be prone to conflicts with their parents too. Parents should just think of teenage as a phase that will go away soon and give them substantial projects to work on individually. Try empowering them and see the positive changes for yourself!