Madhya Pradesh is yet to decide its fate after the nail-biting duel between the Bhartiya Janta Party and the Indian National Congress. Irrespective of who gets the throne, 11 per cent of the house will be filled by people who didn't finish school.

But there's good news too. Almost 60 per cent of the soon-to-be-sworn-in MLAs are graduates. So, we will see less unruly behaviour during the Assembly sessions — we hope. This data surely does not explain why we have had MLAs throw paper at each other and then get into scuffles or why the Assembly sounds like Kasimedu harbour or why the CM thinks roads in New York are worse than those in the state. But this is what the candidates have declared themselves. 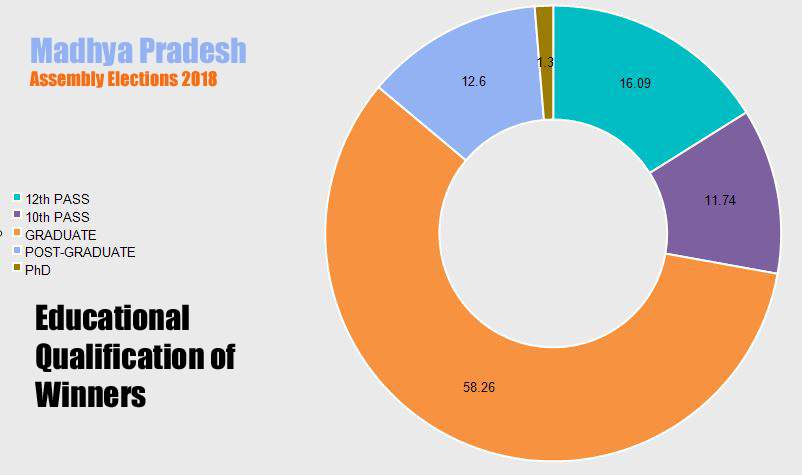 The state will have 19 B Com, 33 BA, 37 B Sc, 7 B Tech, 5 MBBS and 33 LLB graduates and many of them hold two degrees. Dr Sitasaran Sharma, who won for BJP from Hoshangabad, hold an MBBS as well as an LLB degree. We also have 3 MBAs and 3 PhDs in the house. This election has some illustrious candidates as well. Akash Kailash Vijaywargiya, who won on a BJP ticket from Indore-3, is an M Sc in Civil and Environmental Engineering from Carnegie Mellom University, Pittsburgh, USA. Congress's Jaivardhan Singh, a graduate of the School of International and Public Affairs, Columbia University, New York and the prestigious Shri Ram College of Commerce back home, won from Raghogarh. The list on both sides run quite long considering the reputation of Indian politicians in general.

Exit polls had predicted a neck-to-neck fight in the Madhya Pradesh elections but a majority thought Modi's party will be the one on top. At the end of counting day, Congress stands with 114 seats, closely followed by BJP at 109. Bahujan Samajwadi Party trail way behind with just two seats while independent candidates bagged 5 seats.