Forget being a doctor, TN's first transgender to clear 12th grade won't even get a Siddha seat because the form doesn't have the third gender listed

Tarika Banu faces another challenge — no third gender box in college admission form. And, this is despite SC's order directing the option to be present on all official forms

In a shocking oversight of the Supreme Court's norms to include the third gender in all application forms, Tarika's dreams — which reflect a large section of the trans community — are on shaky ground because the third gender is not recognised by Siddha and Homoeopathy colleges.

Only three months ago, the smiling faces of Tarika Banu and Grace Banu were all over the newspapers, Tarika had just become the first officially registered transgender in the State to have passed the board exams. Grace Banu, her "mother" had been instrumental in making this happen, from helping with her gender reassignment surgery to getting her admitted in a government school.

It wasn't easy to get the admission, Grace Banu and Tarika sat outside the school for days voicing their demands, which the school finally yielded to. Sadly, it seems like the duo would have to go through the same painful procedure again for her college admission as well.

The form just had the two mainstream options- male and female. No third gender option box was available for us to tick off. When we enquired with the staff present, they remained quiet

Tarika had said then that her lifelong wish had been to one day be able to don the white coat. With the NEET confusion ensuing, Grace Banu decided it was best for Tarika to choose to study Siddha, a branch of Indian medicine and homoeopathy.

However, when they reached the Directorate of Indian Medicine and Homoeopathy to get an application, to their shock and dismay, they found there wasn't an option on the form for transgenders.

"The form just had the two mainstream options- male and female. No third gender option box was available for us to tick off. When we enquired with the staff present, they remained quiet," said Grace Banu. 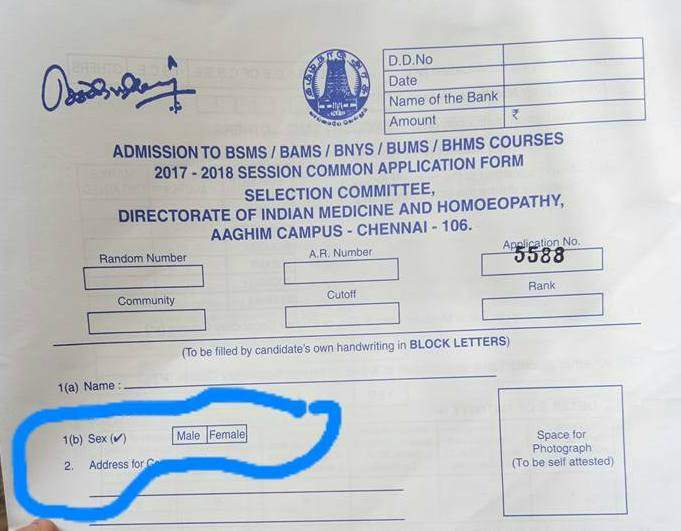 Edu Right: Tarika was disappointed when she didn't find the "third gender" option on the form

In a landmark judgment in 2014, the Supreme Court created the "third gender" option and issued orders directing Central and State governments to recognize transgenders as equal citizens and as a part of the OBC category making them eligible for reservation and other benefits. The order stated that transgenders would be admitted into any educational institution and place of employment and failure on the part of the Institute to do so would amount to discrimination.

And yet, Tarika is unable to find a place in a Siddha college.

For now, Tarika will manually write in the option on the form, "There doesn't seem to be any other way to do it, so we are resorting to this. But we're not sure whether the management would accept this," Grace said. But she's keeping her hopes low because she doesn't think the management will accept the application and thinks that the only way to be able to ensure admission is to take the case to court.

"We're just discussing with our lawyer about how to go about the court case in case Tarika's application is not processed," Grace added.

Wouldn't it just be easier to choose another course to study? "Tarika wants to study medicine and I fully support her decision. So if we have to court, we'll go to court. Someone has to lead the way right? No point just picking an easier way out," Grace said.