Why Sahapedia could be your portal to preserving India perfectly

Sahapedia was founded with the notion that knowledge deserves to be celebrated and nurtured. 'Saha’, which stands for ‘together’ in Sanskrit and ‘pedia’ which invokes the idea of an encyclopedia represents an underlying idea that aims to collaboratively develop a knowledge resource on India and South Asia. This is a not-for-profit organisation with a mission to create an open encyclopedic resource on India's art, culture and history. We speak to Outreach Consultant, Ela Gupta about the journey behind weaving together India's cultural milestones. Excerpts:

Can you elaborate on the idea that Sahapedia stands for?

Sahapedia’s journey began in 2011, when it was registered as an NGO, with an objective to creatively engage with culture and history to reveal connections for a wide public using digital media. The core team at Sahapedia are cultural practitioners, with a collective experience of over 30 years. Being a CSR-supported initiative, TCS Foundation, Infosys Foundation and ONGC are our major funders. Since its inception, Sahapedia has built a resource of over 1500 knowledge elements in the form of articles, videos, interviews, photo essays, digitised materials and bibliographies. In the process, we have worked with over 500 researchers, authors, and practitioners, collaborated with over 30 organisations in the culture sector, and partnered with government bodies from the Archaeological Survey of India and the Central Board of Secondary Education to the Rashtrapati Bhavan. Apart from documentation, we also organise offline-outreach activities such as heritage walks and talks series for wider engagement. Our audience is growing each day and is an engaged community. We have worked on developing interactive content and products like The Cultural Mapping Project in Fort Kochi and Museums of India.

What was the process behind setting up such a digital platform?

We decided to go with a digital platform as it affords maximum access for the largest number of people. We felt that while many institutions, organisations and individuals are doing great work in documentation and research across this region, very little of this work was accessible to regular people. Even researchers face challenges in accessing this work on occasion. So, we decided to make this a digital platform and widen access. While initially, in 2016, we were just on Wordpress, we developed it into a digital platform. Based on Drupal and many customised modules, our users can now submit their articles and photographs directly to us on sahapedia.org. Currently, we are in the process of making improvements to our platform and it should only get better in the future. KNOW HOW: Sahapedia has built a resource of over 1500 knowledge elements

How important has it been to document such cultural and historical experiences?

In the current day and age, it is not only important to instill a sense of appreciation in the younger generation for their own culture, but also for respecting difference and other cultures. Students could learn their own mother tongue, for instance, and its dialects, learn stories and understand how things are made. They can visit local monuments, know local history, visit museums, and share this knowledge with others. That is how we move towards a more cohesive society. There is also a lack of platforms that support such initiatives. So, we feel there is a need to open such spaces of information dissemination and outreach. Additionally, it is stimulating to engage youth with heritage and rethink ways to reach out to them. And as technology plays an important role in their lives, as it not only provides greater possibilities for engagement but also offers opportunities to use newer forms of outreach to keep their interest alive.

Since establishing Sahapedia, how has the culture around the organisation evolved?

For the first few years, Sahapedia was a relatively small team of between 4 and 8 members. During the last three years, however, the team has really grown and now we have over forty team members. This has been exciting as well as challenging. In terms of work culture, while earlier we were focusing more on creating and putting content online, now we work equally on outreach and direct experience. It has also been exciting to see that many other organisations and platforms are evolving in this sphere where culture and technology overlap. Given these developments, we see possibilities of developing a public sphere in which culture and history can play a more central role. TEAM UP: Team members at work in Agra

What are the important technological and social media innovations that have carried this process forward?

Recent technological and social media innovations, in spite of the challenges they pose to privacy and other concerns, have made it so much easier to connect, to communicate, to cross disciplinary boundaries. Using Digital media is embedded into Sahapedia’s mission statement. We felt that while many institutions, organisations and individuals are doing great work in documentation and research across this region, very little of this work was accessible to regular people. Even researchers face challenges in accessing this work on occasion. Technology is an enabler for Sahapedia to achieve its mission. Since inception, Sahapedia has evolved from a small website to a repository and platform for culture professionals to create and share content. Researchers can collaborate with photographers and film-makers to tell stories that have never been told before. As we grow, our vision for what Sahapedia can do with technology and what technology can do for the Sahapedia community is continuing to grow and evolve.

Could you explain about the heritage and cultural traditions that are specific to Kochi and the need to celebrate them?

Kochi’s history begins centuries before the arrival of British. It traces the origin back to the port Muziris (believed to be existed near Kodungaloor region) which was central to the Spice Route. It is believed that a massive flood in fourteenth century destroyed Muziris port and gave birth to Kochi port. These two ports and a long history of active maritime trade shape Kochi. The rulers of Kochi were open to the trade-settlers: The Arabs, the jews and much later the Europeans. This provided a unique socio cultural fabric to Kochi and this fabric created a new kind of ‘cosmopolitanism’. Official records suggest the presence of 38 communities in the Fort Kochi Mattanchery region and the place is famous for the harmonious relationship between all these communities. The history of Kochi is devoid of communal clashes. Contemporary cultures have much to learn from Kochi’s heritage where plurality and diversity is acknowledged and celebrated. Sahapedia’s Kochi Cultural Mapping project tries to foreground this unique heritage. 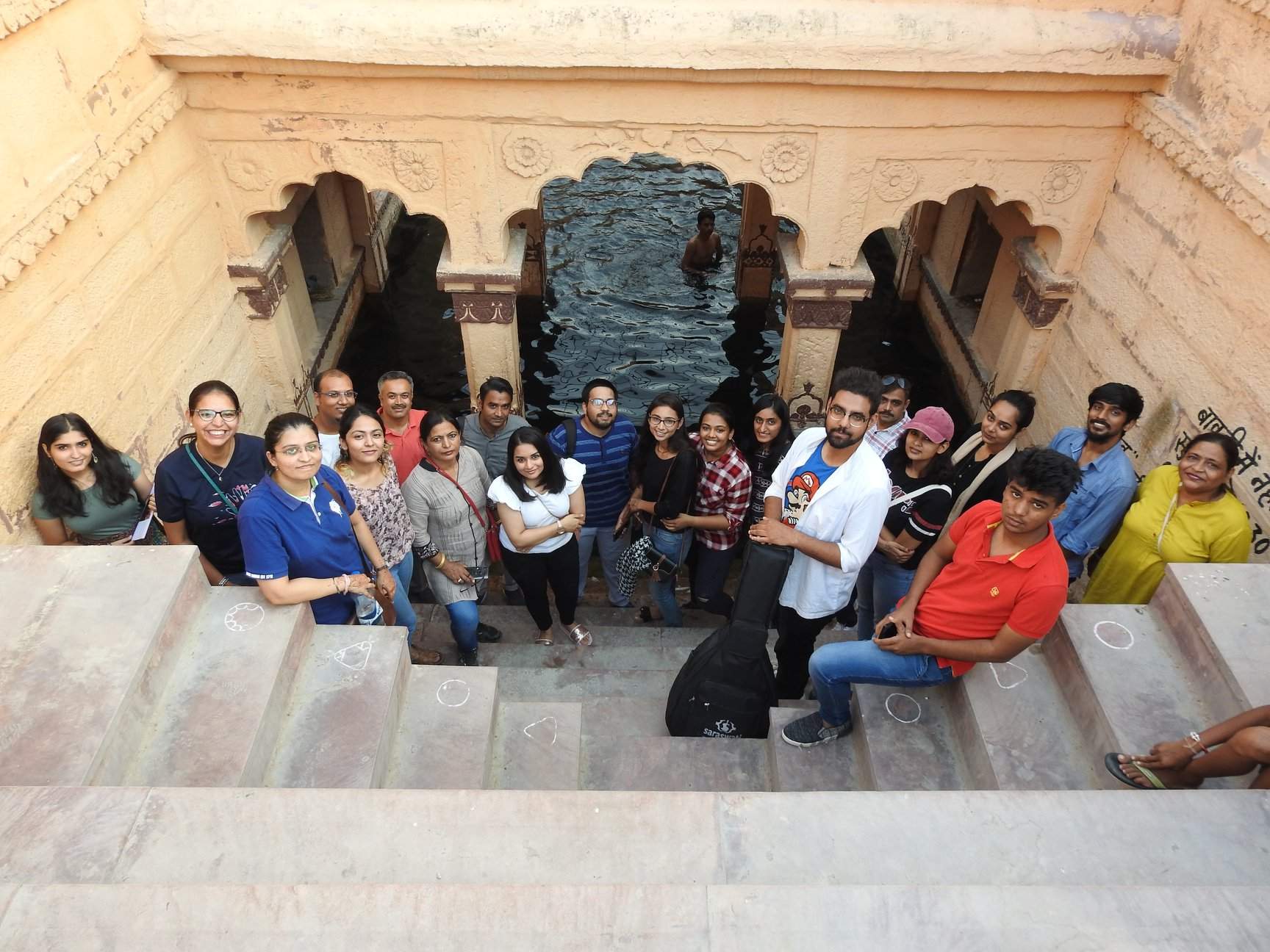 MISSION POSSIBLE: Digital media is embedded into their mission statement

How important is a society and its people in this process of capturing its values?

Communities and people, and their participation, are critical to the process of documenting cultural forms and practices. It is only in dialogue with the knowledge-bearers that we can first understand and then communicate that knowledge to others. The story of culture is not only the story of tradition, but also of change and of how change occurs. And to understand culture as process, it is of first importance to engage with members of the community and to appreciate what of their culture they value, how they articulate changes organically. This is what we try to do at Sahapedia as well.

How have people responded to the initiative so far?

We have received a positive response for our initiatives in both content and outreach. In a recent market research, we discovered that a fair percentage of our audience, apart from researchers, academics and liberal art enthusiasts, are also parents who wish to educate their children on India’s cultural heritage. Additionally, through our outreach activities of over 600 events in across 50 cities that include Heritage walks, Baithaks (talk series), India Heritage Walks Festival and performing arts, we have engaged with over 18,000 participants.

START OUT: The organisation was established in 2011

How has the impact of social media changed the way in which people interact with such content?

With social media being our prime source of dissemination, promotion and registrations, we have over 201,853 followers on the Sahapedia Facebook page and user sessions of over 1,11,000 on Facebook. Additionally, for outreach engagements through our projects like India Heritage Walks we have over 62,000 followers on the India Heritage Walks Facebook page with a monthly reach of over 103,000 on Facebook. Social media offers a direct engagement with our target audience that also allows a real time conversation that we relish.

Do you have any major programmes or events planned for the future?

In the immediate future, we are gearing up for the second edition of the month long India Heritage Walk Festival, in partnership with UNESCO, in February. With its varied lineup, it explores the diversity that characterises the cultural fabric of our country, such as, food, heritage, nature, art, architecture, and so on. There will be walks, talks, workshops and Instameets across India covering a broad spectrum of Indian heritage and culture. The festival has scaled in its reach through the inclusion of 37 cities and more than 110 events across the country. The focus has been to encourage and increase different forms of engagement with interesting and important heritage spaces, while also ensuring that these heritage spaces are made accessible to various audience groups. These efforts have also been specially directed towards those groups for whom engagement programmes in heritage spaces are commonly unavailable, such as children, the differently-abled, and those from underprivileged backgrounds.