What the FAQ: The flag hoisted by protesting farmers was NOT a Khalistan flag. What is its significance?

Several fact checks have been conducted to find that the protestors did not touch the national flag and it was not the Khalistan Flag. Here we explain more

This year's Republic Day was a memorable one for various reasons. The most important one being the farmers' protest conducted on the same day. On Tuesday, January 26, farmers who had been protesting the Narendra Modi government’s farm laws over the past few months reached Delhi's Red Fort and hoisted one of their Sikh religious flags. Immediately, rumours began circulating on social media and even television channels stating that they had done so by supplanting the Indian tricolour hoisted at Red Fort and that it was a Khalistan flag. Following this, several fact checks have been conducted and it was found that the protestors did not touch the national flag and it was not the Khalistan Flag.

Here we answer most of the questions being asked about Tuesday's incident.

Which flag was hoisted by protesting farmers at Red Fort?

Ans: The Nishan Sahib or Sikh religious flag was hoisted by the protesting farmers. This flag symbolises the presence of the Khalsa and hence is hoisted at every Gurdwara premises. The Nishan Sahib is a triangular flag and not at all the same as the Khalistan flag. There is no official flag of Khalistan but mostly they are found to be rectangular and are distinctively different from the Nishan Sahib. The Nishan Sahib also holds massive importance for the Indian Army’s Sikh regiment. 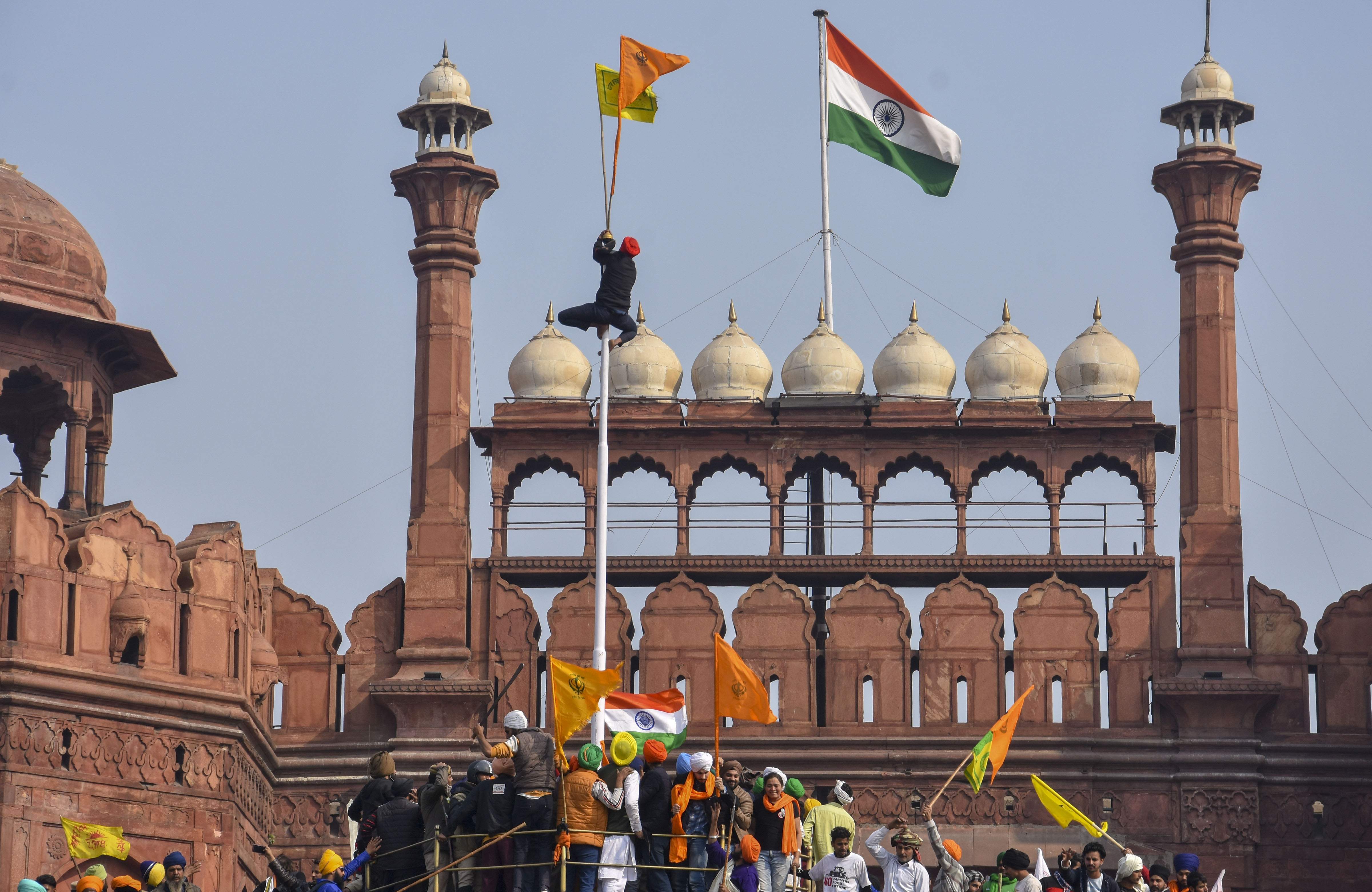 What inspired protestors to indulge in such an act?

Ans: Contrary to what is assumed, that the protestors were inspired by the idea of Khalistan, in reality, it was quite different. The original inspiration for the protesters’ act comes from Baghel Singh, the Sikh general who had hoisted the flag at Red Fort after emerging victorious in his conflict against Mughals.

Why did the protestors hoist a Sikh flag at Red Fort?

Ans: According to an AltNews report, "Whether yellow or saffron, triangular flags with the Khanda – two swords – are Sikh flags. They are not Khalistan flags," clarified Amandeep Sandhu, author of Panjab: Journeys Through Fault Lines. He further explained, "When a flag is hoisted as a symbol of regime change, the previous flag is brought down and the new flag is unfurled. In this case, the tricolour, the flag of India, continues to be hoisted. It has not been touched. The hoisting of the Sikh flag means that the people of the nation want to assert their identity as well. They want to be counted. They want the rulers of the nation to not take them for granted."

What is the Khalistan movement?

Ans: The Khalistan movement is a Sikh separatist movement, initiated during the 1980s, seeking to create a homeland for Sikhs by establishing a sovereign state, named Khalistan. The proposed sovereign state would consist of land that currently forms Punjab in India and Punjab in Pakistan. Chief Minister of Punjab Amarinder Singh has claimed several times that the recent extremism is backed by Pakistan's Inter-Services Intelligence (ISI) and 'Khalistani sympathisers' across the borders in the UK, Canada and Italy.