Ariana Abadian Heifetz tells us about her innovative programme that helps children understand, express their emotions and resolve conflicts better

Ariana Abadian Heifetz knew that to change things for good, people would have to learn to understand their emotions from a very young age. Which is why she followed her calling and started the Social-Emotional Learning Programme at the Heritage Xperiential Learning School in Haryana.

The programme has multiple facets of emotional learning as part of the curriculum, whether it is conversation on gender, emotions in general, how to process it and inter-faith conflict. It's about understanding our emotions, ourselves, our relationships and how we engage in the word around us. "A key aspect of that is gender identity and the emotional stigmas that are attached to it," says Ariana, and adds, "We explore all facets of our identity and what creates conflict. A part of my work is talking about religious identity, what creates violence and what creates ethics." 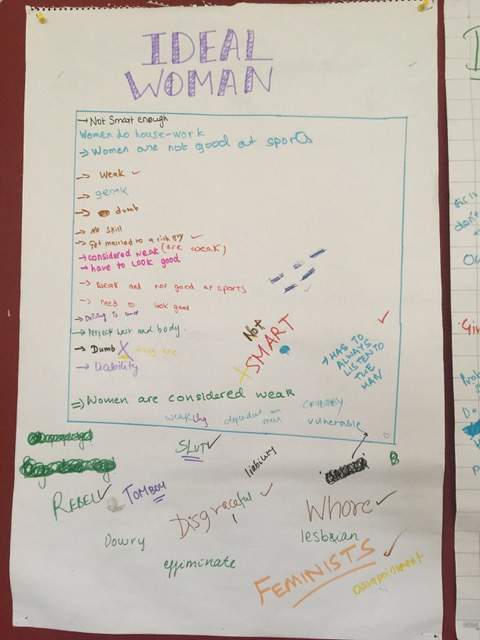 The Ideal Woman box, one of the activities for the senior kids

Ariana works with students from nursery to class XI and she believes that SEL is necessary to question and craft one's identity so that they have the freedom to make more ethical choices, so that they can engage in conflict resolution, engage with people who are different from them in a constructive way.

At the Heritage School, Ariana works with about 3,000 students. With the younger kids, she conducts a programme called 'Me in Motion'. "It's basically to understand that our emotions are felt through our bodies. So we teach them that when you're feeling something, for example, fear, your heart starts beating fast. Students read stories, act out the stories, and put names to their emotions. At the end of every week, they learn a tool. For example, express and request. When you're feeling something, instead of throwing and yelling and punching, express it verbally, say 'I am feeling angry, I am feeling frustrated and then make a request about what you need. For a little kid, that would be something like 'I am scared, can you please hold me'. In that way, students learn vocabulary, when to use it and how to manage their emotions," explains Ariana.

It's no surprise that the kids have already started showing signs of growth. "We have teachers that tell us that their students have learnt to resolve conflicts inside the classrooms. We work really hard to teach children to honour all of their emotions. We focus on the idea that it's ok to not be happy all the time. We are humans to feel all the emotions, what matters is that we express it in a way that it doesn't hurt others," says Ariana.

For the older kids, gender is a key area of focus. "In our society, men and women, boys and girls are conditioned to see themselves very different in terms of what emotions they can express and what characteristics they are allowed to have," explains Ariana.

She goes on to describe how they work with the kids to help them fight these stereotypes. "We have this activity called Ideal Woman box for the girls and Be a Man box for the boys. With the Ideal  Woman box, we have a list of characteristics that women are expected to have. For instance, sensitive, peacemaker, mother, homemaker, slim, beautiful and so on. Then we ask them what are all the things that women are called when they don't fit into the box. Then the students come up with all these abusive words that they've heard in their own lives like 'you're selfish, you're bossy, you're a shame on the family', words that force them back into the box. We do the same thing with the boys as well. We ask them about what men are expected to be, and how they are perceived when they don't fit in. We also ask them to analyse each abuse and show them how there is always a power element in it. They realise that the swear words that they use are actually promoting a certain culture that is deeply problematic."

Ariana and her team also ensures that the boys don't feel guilty or blamed, but that they recognise that they're part of the solution. "Men are often struggling with mental health because they haven't been given productive tools to deal with it, and a consequence, women bear the brunt of that violence. It's important to understand and treat the cause," she concludes.