After six students protested for better food and relaxation of campus curfews, the administration suspended them — leading to a massive student agitation and a complete shutdown for the weekend

Agitating students at the Rajiv Gandhi National University of Law (RGNUL) in Patiala, Punjab called off their five-day protest on March 19 after the university administration agreed to revoke the suspension of six students who protested for better hostel food and library access for female students. This came after deliberations took place between a committee constituted by the RGNUL Chancellor, Punjab and Haryana High Court Chief Justice Krishna Murari and student representatives.

Vice Chancellor Paramjit Singh Jaswal’s announcement of agreeing to their demands came hours after Punjab Advocate General Atul Nanda met the university students to discuss their concerns and demands, including the revocation of an order to suspend six students for protesting against the poor quality of food in the hostel and the revision of hostel timings and library access for female students.

While speaking with The Tribune, Nanda said, "Students have reposed faith in the Vice Chancellor (VC). They have withdrawn all their complaints. They want a little bit of change in the varsity’s environment in accordance with other universities. Students have agreed upon all the matters." The AG added, "This is a way forward. There has to be a responsibility of students to adhere to their own security concerns."

The students had begun the protests on March 15. On March 16, the alumni association had written to the Chancellor and Chief Justice of the Punjab and Haryana High Court Justice Krishna Murari, accusing the university officials of verbally abusing male and female students. The students began protesting after the suspension of the fellow students after they were asked to vacate the hostel premises. They had been accused by the administration of having "indulged in indiscipline and hooliganism" in the boys’ hostel.

The agitating students also alleged that the faculty confiscated the phone of a student. "Upon insisting that our fundamental right of privacy is being violated, the faculty shamelessly and unreasonably responded with abuses and stated that the students are in no position to teach them how the law works," said a student of the university, who wished to remain anonymous. 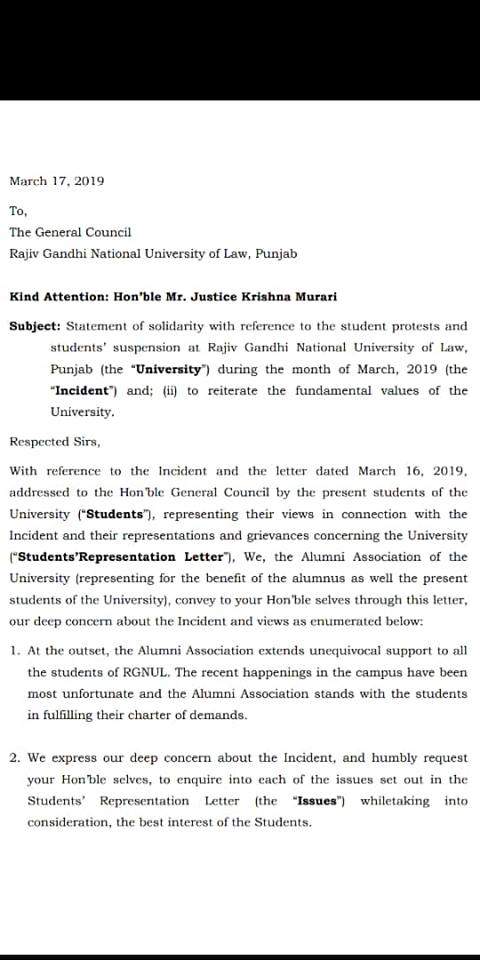 Letter by the Alumni Association at the Rajiv Gandhi National University of Law (Pic: Facebook)

According to the alumni letter, when the students raised objections their resistance was met with verbal abuse."The association emphasises the paramount importance of ensuring the safety of the students and their protection against any form of mistreatment or abuse by any member of the university, whether or not as a consequence of the incident," the alumni association letter read. 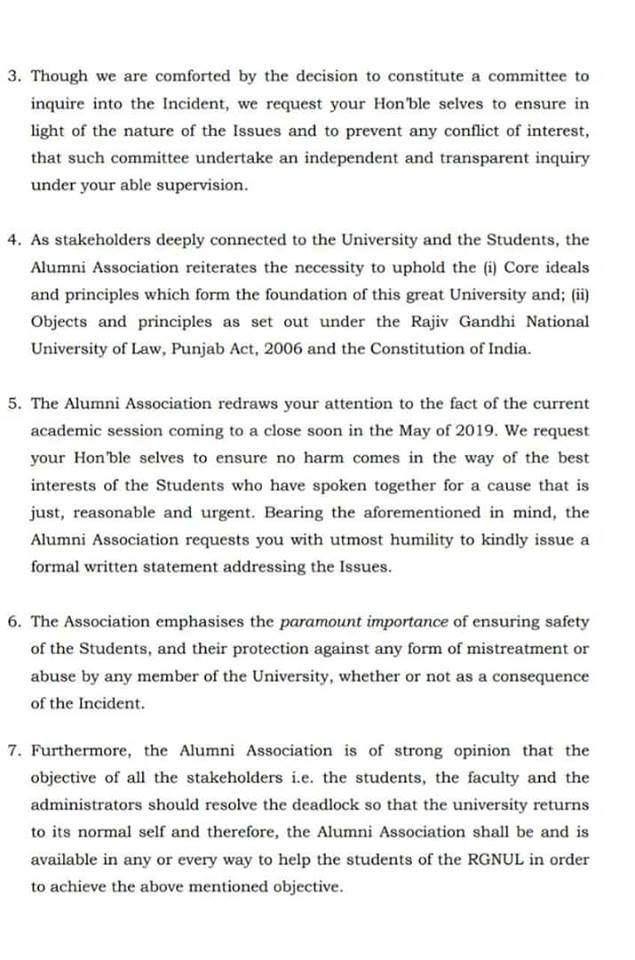 The students have also demanded action against an administrative officer, who passed the suspension order in the absence of the VC, whom they also accused of harassment and sexism. They had asked for a high-level inquiry committee against Administrative Officer Captain (retired) SP Singh because of the allegations against him. The administration has ordered an inquiry into his conduct and Singh has also been sent on compulsory leave till the inquiry is concluded.

Support poured in from students across the country as the students at RGNUL carried out protests against the administration. "The events transpiring at Rajiv Gandhi National University of Law (RGNUL), in the past few days have been greatly distressing. My support goes out to all the students of RGNUL who are taking a stand against the unjust and arbitrary acts of their administration. The students' demands are completely fundamental, equitable and justified and thus, should be met. We empathise with students of RGNUL and their struggle against the despotic action of their administration. It is agonising to witness the irrational and discriminating practices, such as the campus and library curfew, the lack of accountability by the administration, and the wrongful suspension of six students. Therefore, we stand in complete solidarity with RGNUL," Aakash Choudhary, Secretary, Delhi University Students' Union said in a statement.