A school drop out himself, Kamaraj was motivated from the very beginning to invest in the development of education in the state

The story goes that K Kamaraj, the third Chief Minister of Tamil Nadu, as he waited at a train intersection near the town of Cheranmahadevi in Tirunelveli district of Tamil Nadu, spotted a few children herding sheep. When he asked them why they weren’t in school, a child responded with a question, “If I go to school, will you give me food to eat? I can learn only if I eat.” After this incident, Kamaraj decided that he would take all steps to ensure not just this child but every child in Tamil Nadu would get a meal when they go to school. This was just one of the many reasons why Kamaraj went on to be called the ‘Father of Education’.

Just a few days ago, we celebrated his 117th birth anniversary, so we decided to look at the man who brought on an education revolution in the state through several policies and initiatives that went on to impact the entire country as well. A school drop out himself, Kamaraj was motivated from the very beginning to invest in the development of education in the state. The midday meal scheme is probably the former CM’s most celebrated initiatives though. In 1955, Kamaraj wanted to understand the impact of midday meals in municipality schools and schools for Dalit students. He was told by the administrators of these schools that students arrived in two fold numbers between Monday to Friday in comparison to Saturday when they were not given a meal. 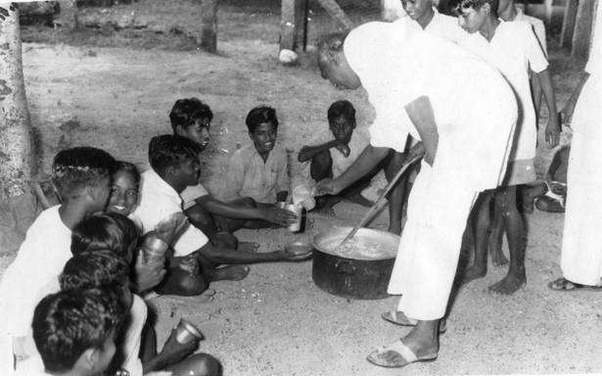 It took a great deal of convincing and persuasion from Kamaraj to get the DPI to give the midday meal preference over other initiatives they had come up with. His own experience of receiving 1 kg rice for his family while he was in school reminded Kamaraj the value of providing students with food to encourage them to go to school. Kamaraj travelled all over the state to spread word about the importance of this initiative, he had decided to implement the scheme even if he wasn’t able to avail central and state funds. He managed to expand the scheme to all elementary schools by 1957 under the funds available from the Central government.

But most of the funds for the midday schools came from public donations. Within the next five years almost all children from elementary schools had access to the meal solely based on public donations. Because of the success, the centre and other institutions also began to contribute to the effort.  The midday meal scheme managed to keep students in schools, get students who had given up to come back, starving students to study better because they were being fed. After the scheme was successfully implemented throughout the state, the Centre also soon adopted it. He also made education up to the 12th standard free. But Kamaraj’s work in education didn’t stop there, in the same way that the idea of midday meal struck him, there was another experience that he had with children of school-going age. He found that female students from poor families were not confident about going to school, because they were worried about what they would wear. Which is when Kamaraj decided to distribute free uniforms to children. He hoped this would decrease inequality among students too.

During Rajaji’s term, hereditary-based vocational courses were introduced which required children to learn the occupation of their parents. Kamaraj ended this discriminatory initiative and reopened 6000 schools that were shut during Rajaji’s time and additionally opened 12,000 schools. He aimed to set up a school in every village with over 300 people.

Under the great leader, the percentage of children between  6-11 years going to school went up by 30 percent and the literacy rate went from seven percent to 38 percent in the Tamil Nadu region. It was after these massive interventions that primary education in the state and around the country improved drastically. So, there’s no wonder Kamarajar was bestowed with the title of ‘Father of Education.’