The H2O story: How this Kerala NGO has been helping special kids make sense of the pandemic - and keep learning

The Helping Hands Organisation’s (H2O) office in Thiruvananthapuram now sits smack in the middle of a containment zone. The rehabilitation and facilitation centre for autistic children has now shifted into the employees’ laptops while a lone resident worker waters the flowers in their backyard where 78 eager children used to play between their classes. The COVID-19 pandemic and the shift to virtual learning has been especially difficult for special needs children,their parents and educators. Jolly Johnson, the founder of H2O, explains the struggle in detail.

“As a community, we have been forced into this virtual world,” explains Jolly. “We tried to stay open for as long as we could but now we have no other choice. Right now, we are training our volunteers who are working with the the children on how to navigate technology. Right now, we ask parents to lend their phones to the children. And for those households where they don’t have phones at all, we have been organising collection drives and distributing second hand phones and other essentials.”

As many as 293 families live in around the IT hub of Kazhakkoottam where H2O’s office is also situated. When the pandemic hit, the team’s immediate response was to take care of the families that their students belonged to and raise enough funds to keep them going. Making the transition into virtual instructions has not been easy for H2O’s volunteers either. Currently, their days are filled with making phone calls to the families, keeping track of the students’ learning and even sending copies of notes for those students who may have been trailing behind. 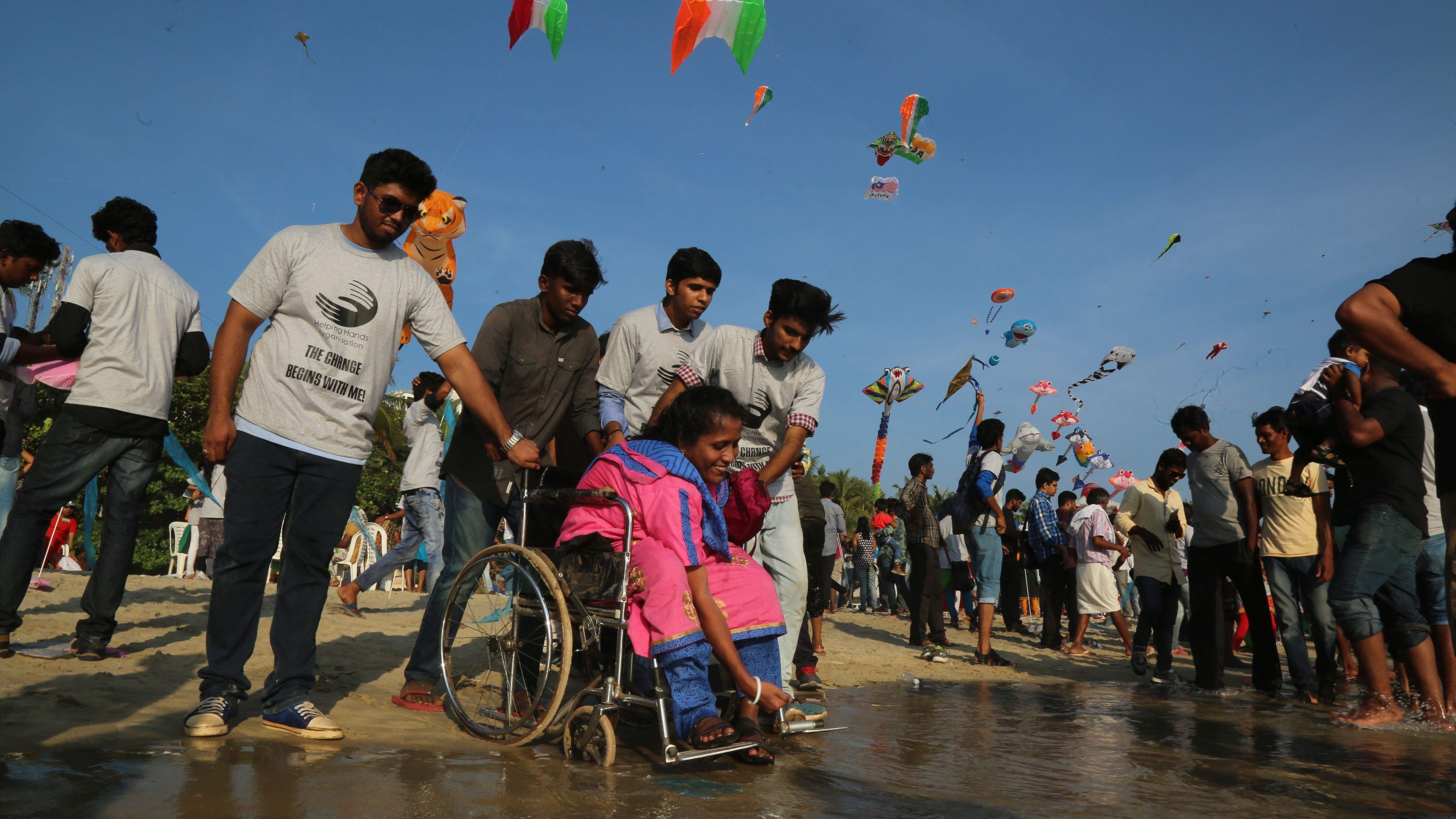 How it all began

If everything had gone according to her plan, Jolly Johnson would have become a Catholic nun by her twenties. She says, “I grew up in a religious family. As a child, I wanted to join a congregation because I used to think it was the only way to give back or contribute to society. I wasn’t allowed to go out into the world and help out, so I had to figure out some other way.”

After completing her 10th standard, Jolly began teaching two children from her neighbourhood in her free time. A year later, the number grew to 32 and then 68 by the time she had reached college. She paid for her own degree as a science major through odd jobs like delivering newspapers before she completed her MA Sociology and an MBA. Still desperate to play her part, the first job she took up was with a charitable trust. 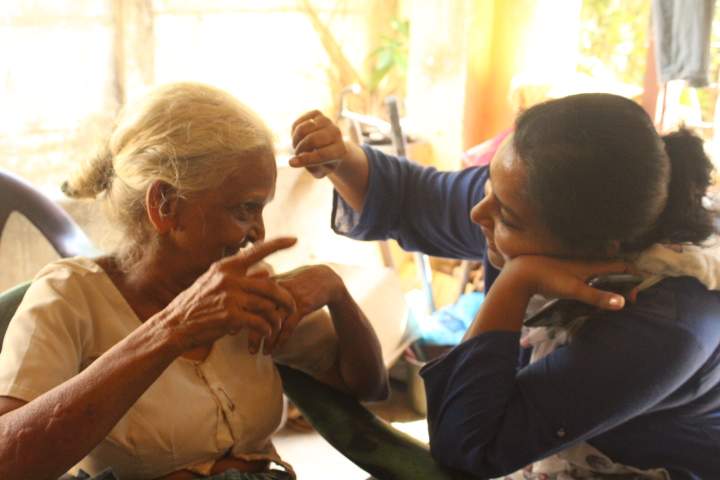 CHANGE HEART: They also work with the families of children

In 2012, the NGO was established officially. She says, “That first brush with helping young students in my area was my first brush with that true satisfaction of helping another person. It gave my heart a constant push to do more. I started meeting a lot of people to research about who I can help and how to go about it. I understood how misunderstood autistic children were in the education world at the time and knew that it was where I wanted to begin.”

She continues, “Mind you, this was a time when Autism has not even been identified by people as a specific disorder, everyone was clubbed together under this large and vague special needs category. Children were hidden under this and there was no understanding about what they needed.” When they first opened up, H2O also admitted students who had conditions like Cerebral Palsy and Down Syndrome.

The main aim was to create a safe environment and community for mentally challenged children. Since therapy was an expensive option for most low income households, they offered proper experts to work with the children. And for those students who had milder symptoms, they also set up regular vocational training. 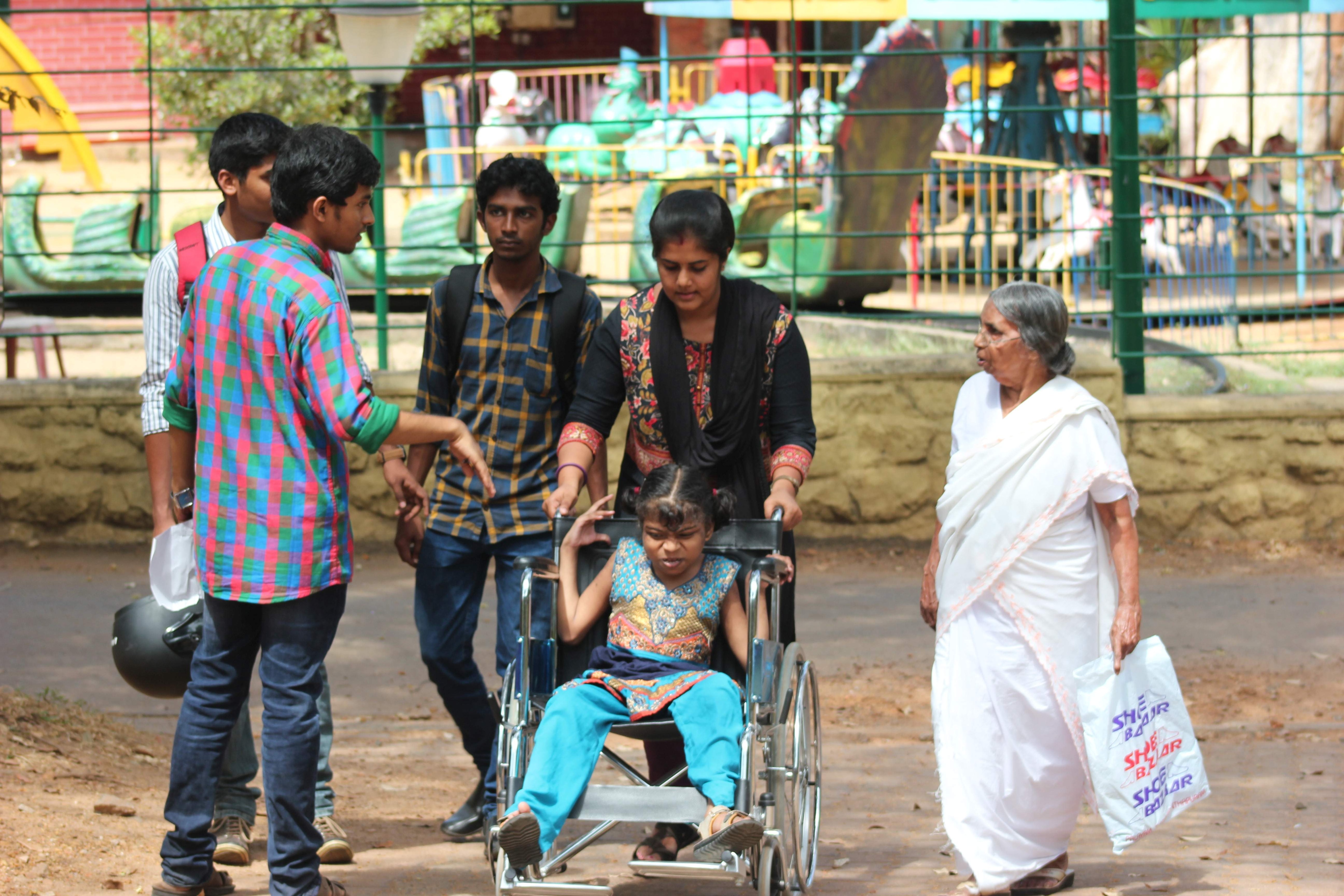 WHEELS AHEAD: Children were identified through a careful process of screening

Children were identified through a careful process of screening with the help of teachers from public schools and anganwadis. Those students who are recommended for training by their respective teachers are visited by the organisation’s psychologist. Following this, they are referred to various departments within H2O such as behaviour therapy and speech therapy who observe the child for a week’s period to understand their specific needs before they are enrolled in the programme.

To design a programme perfectly tailored for each individual child, Jolly and her team have learnt that it takes at least a month of patient interaction and commitment with the child. She explains, “Once we complete the evaluation, we know their baseline and can arrange the rest accordingly. Each department has specialised modules with short term and long term goals. We have a single van with which we pick up and drop the kids each day according to their schedules. And because we don’t have the means to support more children right now, we have to keep a limit on the number of children we can take at a time.” 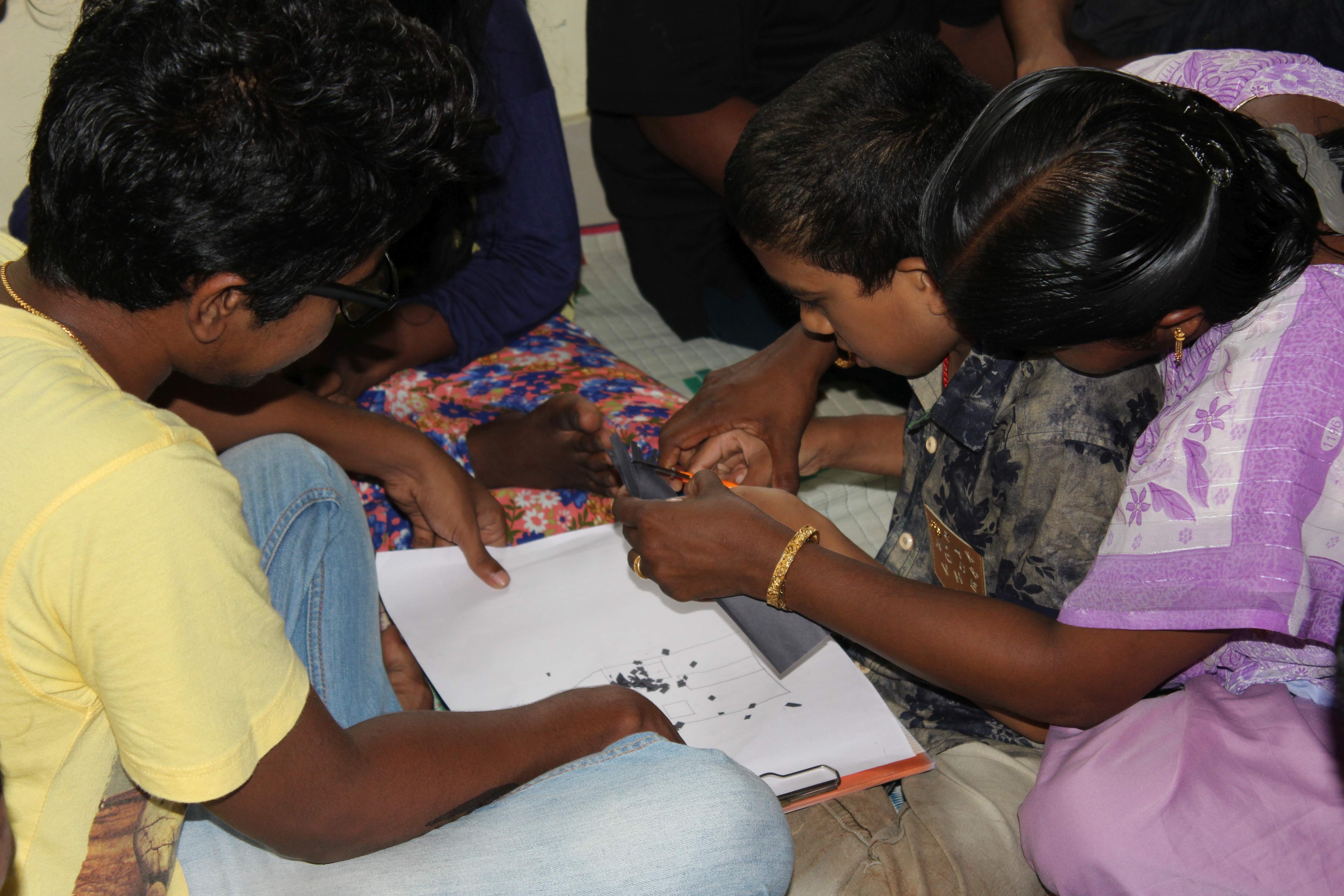 LEARNING LANE: They follow a strict schedule on weekdays

Taking it off the track

While they follow this airtight schedule on the weekdays, weekends are a whole other matter. Students are also offered music therapy, horticulture therapy, daily living skills and a range of other courses. As occupational therapists were difficult to find, they find experts who are trained by the residential therapists. In addition to this, they also have regular sports and activities sessions.

Inclusivity training: In a society so quick to write people off based on their differences, the H2O team have found solace in the idea of inclusivity. On Saturdays, students from schools around the area join the children at the organisation just to realise how simple it is to be kind to people and accept them. Jolly says, “Our idea of inclusivity works on many levels. Everyone from our staff, visitors and parents are encouraged to interact and engage with each other through arts, crafts and simple conversations.”

Pratheeksha and Sanjeevania: Pratheeksha is a range of inclusive activities with the siblings of the students. The volunteers interact with family members in an effort to help them navigate those aspects of learning and therapy that might be difficult to understand. Through Sanjeevani, the organisation focuses on the elderly in the homes of their students and offering them support and help. 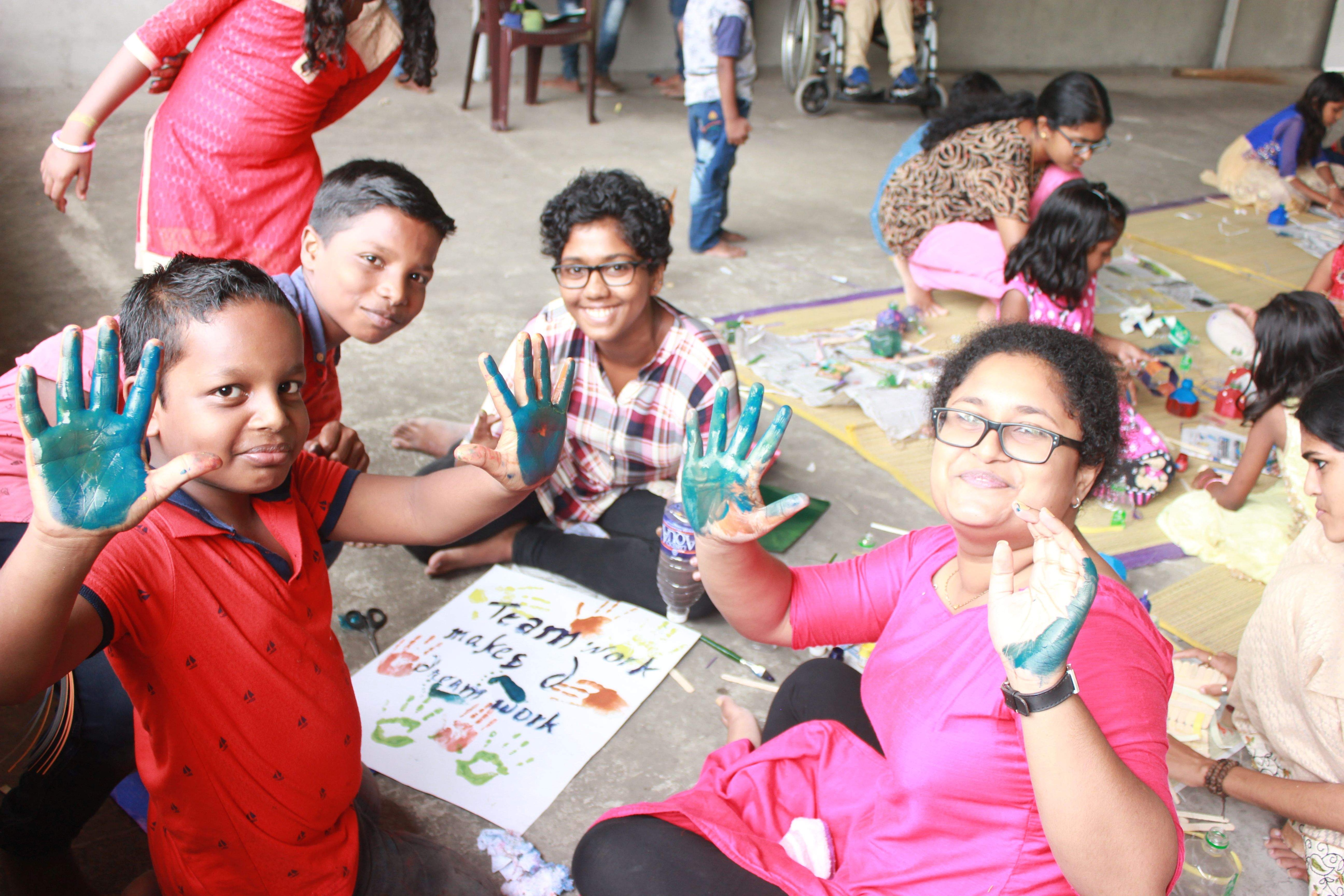 HANDS ON: They organise a number of activities and events

#MeTheChange: A civic awareness initiative set up up by H2O has temporarily gone online due to COVID-19. The idea was to build a community of volunteers in schools across the state. Through civic clubs set up in the schools, they create a management team with board members, therapists and volunteers. Through the civic education programmes organised, students are taught democratic values and the importance of experiential learning.

The organisation has tied up with the Children’s Movement for Civic Awareness, a Bengaluru-based NGO to research and learn more about the same. The idea is to build a community from the public schools. The subjects that are discussed and taught include values that are necessary for an individual, at home, for society and on a number of social subjects such as music, theatre, gender, the environment, etc. As a part of the campaign, H2O is working with over 4000 children in Idukki. 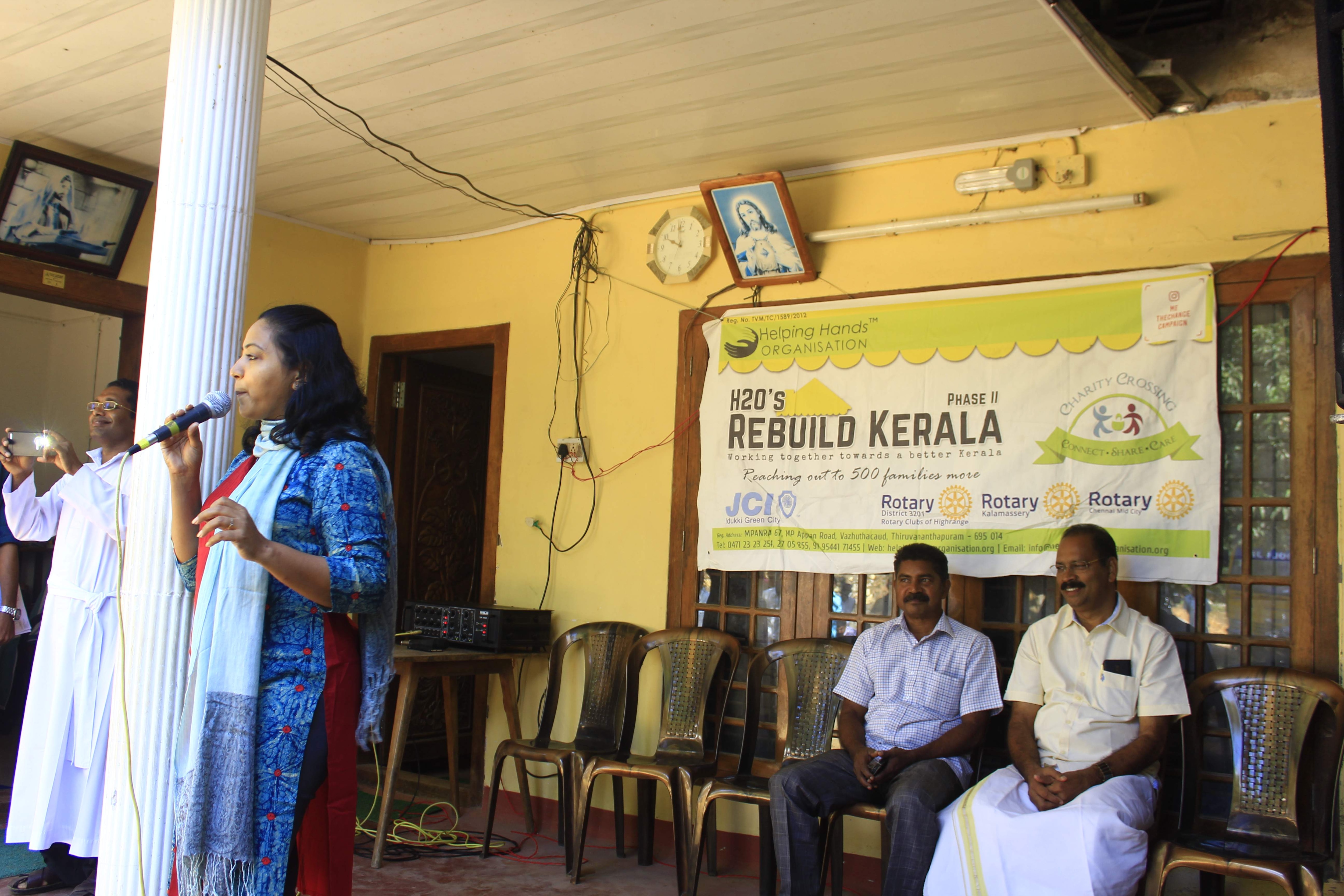 STORM EYES: In 2018, they supported those affected by the Kerala floods

“There is a lack of statistical understanding in this field, especially with Autism,” begins Jolly, about her biggest fear about the future. “Considering the grassroots levels, data is barely available. The state government has done surveys but they are not accessible to the general public. In india in general, there is no state and district-wise understanding about the status of special needs children and what we must do for them.”

She also warns about the direction in which research has been moving. “Autism itself is being dealt with in a westernised way. Everything from therapy to opinions are borrowed from a completely different environment and we have no guarantee about how effective it will be on children.” 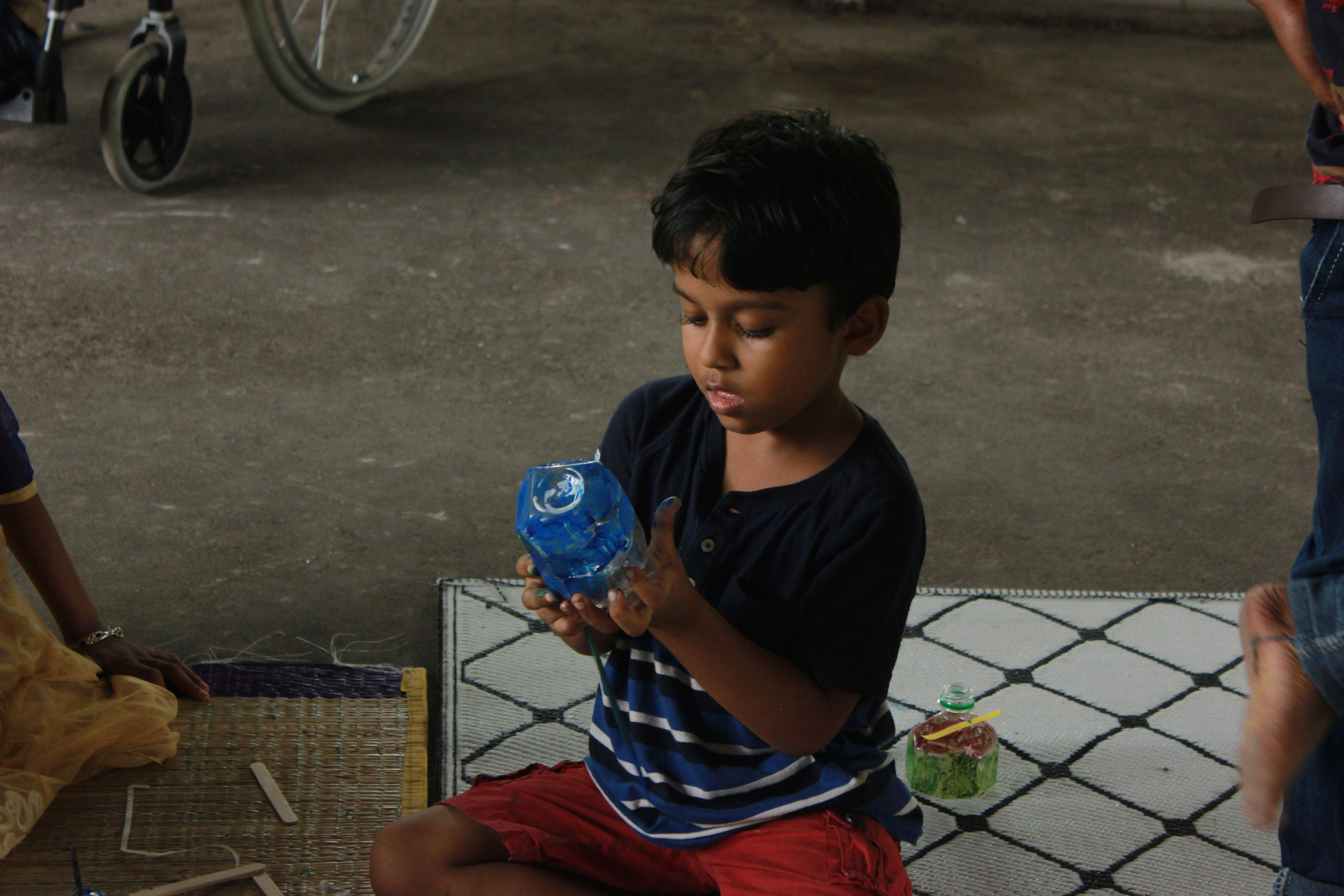 But she’s hopeful about ordinary people and their growing sense of understanding. Over the years, H2O has shifted focus in trying to teach their children daily living skills and being independent. In a few years, they hope that their students will claim public spaces as their own. An effort is underway to ensure that all public spaces from buses to beaches are made disabled friendly with relentless letters to MPs and other representatives.

Each year, the team conducts a kite festival on a beach in Trivandrum where the children and their families come with giant, handcrafted kites and let them loose in the sky. Jolly likens her students to the same. "A kite flies most freely when you ease its strings a little bit. It's the same with these children. You have to let them find their own way into the sky."