Teachers' Day: At 91, this teacher from Tumakuru, who worked with C V Raman, is still taking PU classes every day

The educational institution which began with a mere 36 students, now has a record number of 1,800 students. It is mostly down to his stellar efforts over the past many decades

He turned 91 on August 25, which also marked G Seetaram's sixty-seven of years of teaching marathon. Yet, he teaches PUC students at Sarvodaya Pre-University College in Tumakuru for two hours every day, taking classes in Nuclear Physics. He is also the Secretary of the institution, which he founded in 1974.

The educational institution which began with a mere 36 students, now has a record number of 1,800 students. Seetaram, who taught the PUC students for over two decades, has produced an innumerable number of achievers including young scientists and civil servants, who had all been his students. 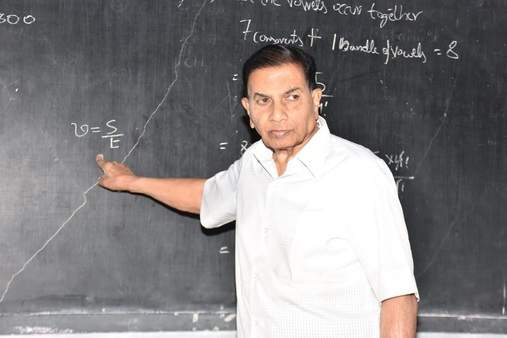 Shruthi Venugopal, Assistant Director at the Ministry of Defence of India, who had just recently visited Seetaram also interacted with the students. Anil Kumar, a research scientist at NASA and Prafu H Ray of ISRO were all students of Seetharam. "It's fascinating to attend his classes as he teaches making the disciples apply their mind. For instance, he compares an atom to a mother and child and explains how it works," says Akash, a second-year PUC PCME student who longs to join IIT to become a scientist.

"His love for teaching brings him to the college premises sharp at 8.30 a.m daily and set an example as to how a teacher must be punctual. A true teacher, Seetharam sir never stops teaching. I am extremely happy to be his student," asserts Syed Haniya, a II PUC PCMB girl student who wants to pursue her MBBS after II PUC.

He keeps the students alert by raising questions as to whether they have understood the concept or not and never lets them go unless and until they feel comfortable with it. Interestingly, Seetaram himself got an opportunity to be the disciple of the Nobel Laureate Dr C V Raman and work in his lab for about two years between 1967-1970. "I was interviewed when I was in the II year of MSc at Central College in Bengaluru and got selected to work under him in the project 'Physics and Physiology of Colour and Vision," revealed Seetaram.

Starting from high school students, he has even taught the engineering students at Siddaganga Institute of Technology (SIT) as the Siddaganga Mutt's Sri Shivakumara Swamiji had insisted on it, "Teaching gives me great pleasure and I will continue to do so as long as god permits me to do so," quips the 'born' teacher whose entire family was into teaching. His father Rangachar used to teach Kannada and Sanskrit to Sri Shivakumara Swamiji while his grandfather Srinivasa Raghavachar was one of the teachers to the Nalvadi Krishnaraja Wadiyar dynasty of Mysuru.

Seetaram's late siblings including GRS Raghavachar, the founder of Vijaya BEd College in Bengaluru, Ramachandrachar and their sister Lavanya were all into the teaching line. The three brothers who remained bachelors throughout a life dedicated to teaching. Their loving mother Ranganayakamma was the backbone of the entire family as a homemaker and she was their first teacher at home at Garani village of Madhugiri taluk from where they hailed.The lone survivor G Seetaram had never been after any awards in general except for the NCERT award for innovative teaching twice alongside his close friend late K Venkataramaiah, also an educator.