How Hariom Jindal is teaching democracy to slum children in Ludhiana

A for Apple, B for Ball, C for Cat has been the building blocks of our education. But this businessman-turned-lawyer and educationist disagrees. “We should teach our kids about democracy and governance from the very start,” says Hariom Jindal from Ludhiana, whose book Empowerment through Knowledge is trying to change the education as we know it. “People say that it might be a bit too much for them to digest but for a child who has not attributed the word ‘Apple’ to an apple it is as easy or difficult to understand A for Administration,” he says.

The very moment a child is born, they become a citizen of the country. Eventually, they will grow up and once they are 18, they will vote to elect a representative. But if the kids are not properly educated, how will they exercise their right to vote or even understand what democracy means?

Hariom believes that the education system should enable them to ensure proper delivery of the rights enshrined in the Constitution of India. “It’s been almost 72 years since we got independence. But no government has been able to give the children born in India their fundamental rights in these seven decades,” says Hariom. “If they are born poor, it’s almost certain that they will die poor as well. My project’s foremost aim is to empower all these kids so that they are well equipped to be able to choose the right government,” he adds. It’s been almost 72 years since we got independence. But no government has been able to give the children born in India their fundamental rights in these seven decades.

The education system in our country does not provide us with the knowledge to deal with real life. Many of us do not know how the government functions or even who the president of the country is. “I felt the need for an educational set up that will make the students aware of how democracy functions and what the rule of law that runs this country is,” he states and adds, “My aim was not only to educate kids about their rights so that they can protect them but also to give them the sense that they are the joint owners of public property so that they can take care of that as well and contribute towards the productive growth of India.”

His book is not just about the basics of governance and democracy but also talks about day-to-day real-life problems that people face. "There is a chapter about traffic lights and how they work and who is supposed to take care of them. My students were able to write a letter to the commissioner of the municipal corporation about a road and a traffic light that need mending," says Hariom.

“They knew exactly whom to approach with the particular issue. These issues plague our daily life and educating the kids from a tender age will nip the problem in the bud. They will be well equipped to deal with these issues. They type the letters themselves and also deliver them to the government officials so that they can deal with the government without fear.” 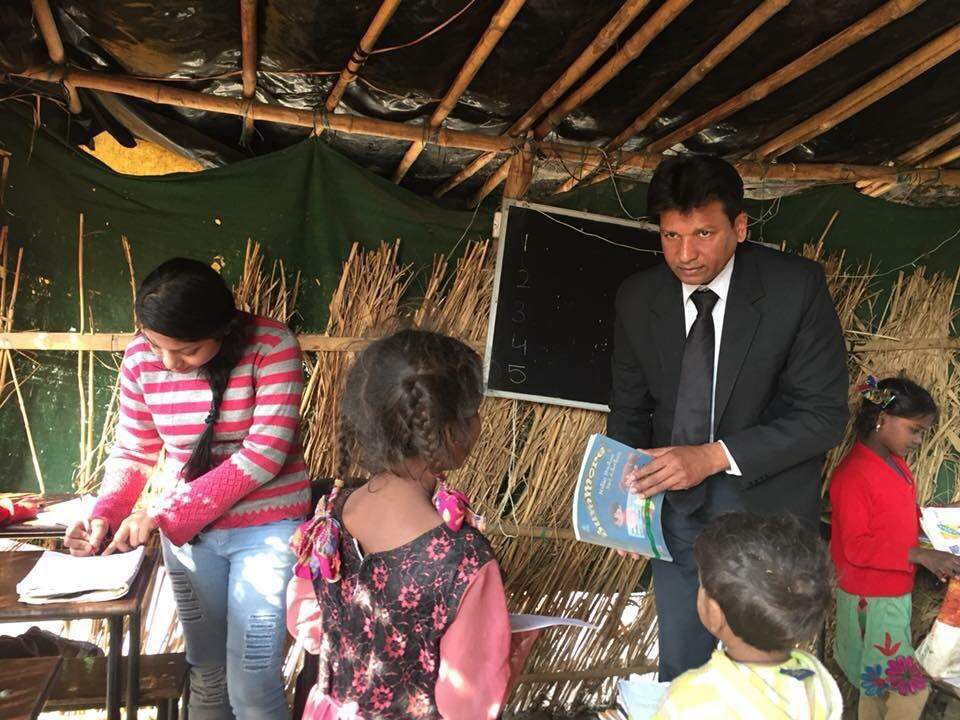 Ensuring education reaches all: His book is not just about the basics of governance and democracy but also talks about day-to-day real-life problems that people face

Hariom feels the content of what is being taught in schools is not enough. “If the content is not right, the delivery will not be right. The teachers will not be inspired either,” he explains. “But a structural change, like the one I have proposed, will take time to be implemented. Till then, the students need a formal education to get jobs. So, I have enrolled them for open education systems of the government of India. My students sit for the exams of Class III, V, VIII, X and so on as private students. I have also set up a computer centre for the students to teach them basic computer skills.”

Jindal’s journey from a businessman in the international transport industry, who quit his business to go on to do something for the underprivileged children, to a lawyer and tutor is no less intriguing.
He started writing about social justice in 2008 when he felt that his contribution to society has not been enough. “I was teaching underprivileged children from the slums when the idea of teaching them the basics of democracy came to me in 2012,” he adds. Hariom has met school administrations to have his book included in their curriculum. Even though all of them liked the idea, they have declined his request to include it in their syllabus because the kids are already slammed with studies. “My students could finish the governing board’s curriculum for the respective classes in just over a month. It matters how they are taught as well,” says Hariom. He has sent out letters to Prakash Javadekar, Minister for HRD and Prime Minister Narendra Modi. “I had sent a letter to Arvind Kejriwal as well since he always speaks to right the wrongs. But he did not reply either. Only a few days back, the office of Javadekar replied after I filed an RTI,” he concludes.