Why Anil Srinivasan wants you to listen to music when you study. Really

A musician, a pianist, an educator and more than that, a person who believes in giving back to society. Anil Srinivasan, a Chennai-based pianist has been associated with music for more than three decades now. From albums to film scores, concerts to collaborations with various musicians, his music has been diverse and far-reaching. Much like Anil, the person. But what sets him away from the crowd is his dedication towards using music to help children become better people, scientifically,

According to him, be it listening, learning, teaching or performing, the impact of music is vast. ‘Rhapsody – Education Through Music’ was a unique programme that he had started about five years ago and has now reached more than three lakh students — in more than 160 schools across Tamil Nadu. As Rhapsody is slowly being implemented in a few schools in Bangalore, Hyderabad, Puducherry, Pune, and Mumbai, we caught up Anil. Excerpts:

How did the concept, ‘Education through music' come about?

It was in 2012, when I went as a chief guest to a school in Tiruvarur. It got me thinking about where music stands in our education system. When I asked about the trinity of Carnatic music, one of the replies that I got from a student was “Namitha, Nayanthara, and Shriya!” This was like a wake-up call for me because I understood that there is not only a disconnect from music but also that it has also become a joke in the classroom. For a year, I spent my time traveling to different schools in and around Tamil Nadu to find out what was happening in music classes. 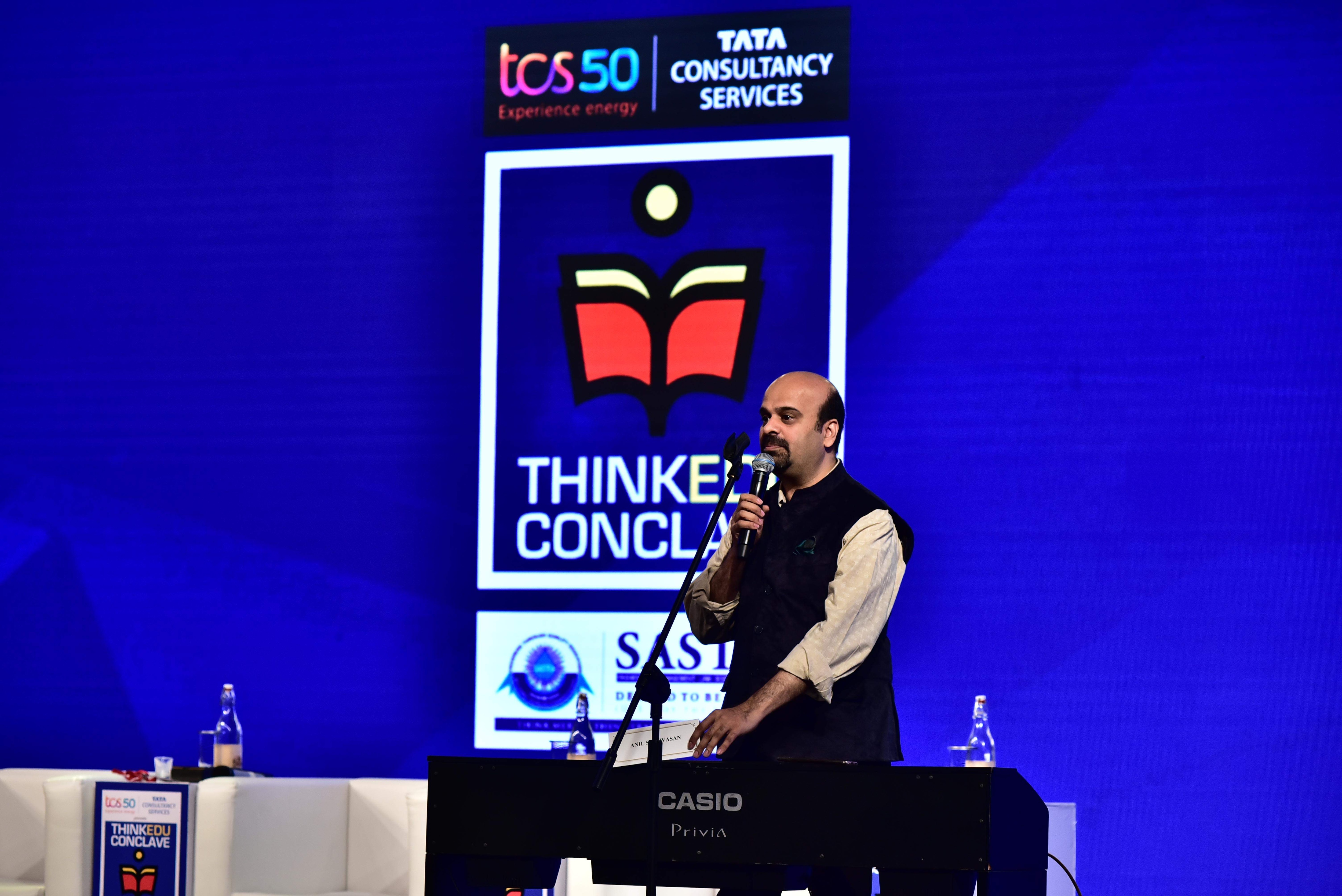 Being first: Anil Srininvasan is the first recipient of the Sangeet Natak Akademi youth award for creative and experimental music

What was it that you found?

Music is a huge cognitive facilitator, it is something that works on the brain. I believe that music has to help education and not the other way round. For this music should be an integral part of the school curriculum.When children learn concepts in the form of songs or music, there is better engagement. Music is an innovative and scientific way to unlock imagination and make every learning meaningful. Through 'Rhapsody – Education Through Music', we have formulated a 10-year module with 450 multi-disciplinary, multi-modal, multi-genre lessons to be taught from LKG to class VIII and convinced school administrations of the deep-rooted benefits of music to the students.

How is that we can connect music to everything around us?

There is a connection between music and other domains around us. Music has the power to connect two completely strange human beings, at the same time, it is also capable of connecting people to the environment. Even the art of kolam has a unique connection with music. In short, music is nothing but the representation of the frequencies of the environment through a certain set of frequencies. So it obviously connects everything in this world.

When it comes to experimenting with music, you have never taken a step back. What drives you toward this?

I think music has helped me realise that the journey is never complete. My guiding philosophy is 'How can I contribute to the public?' I am someone who takes a lot of risks. I am one of those people who doesn’t consider that this is a challenge. When it comes to music, I just go with the flow. The idea of 'Rhapsody – Education Through Music' or 'Concert in the Dark' would not have seen light if I did not experiment with music.

How did you get into music at a very young age with no famous musical lineage?

I started my musical journey at a very tender age of three. I don’t come from a musical family, in fact, I am the first person to choose this path as a career in my family. I just started playing the piano since I was in kindergarten. After that, there was no looking back. I have a very inter-connected approach to music.

Concert in the Dark was a very unique concept. How did that happen?

The idea came to me when I met C Sundaresan who runs the Gnanadarshan Seva Foundation for visually-challenged girls. I decided to do a few concerts and raise funds for the foundation. But I didn't want it to be the usual fundraising concert, Instead, I wanted the audience to feel how difficult it is when we are deprived of sight. That’s how the idea of Concert in the Dark came up.Music is something that comes from the soul. So we have planned the concert in a way that will have the audience seated in a dark auditorium for an hour. Initially, it was challenging, so before pulling out the concert I had to get used to performing in the dark. The entire process was exciting, because performing blindfolded means that I cannot make eye contact with people, which usually gives me a chance to sense the pulse of the audience and perform accordingly.