Earlier this month, the National Commission for Backward Classes pulled up the University of Hyderabad administration for irregularities in the admission processes and demanded responses to a set of questions. The University of Hyderabad Vice-Chancellor Appa Rao Podile has responded to the questions and insisted that the administration had followed the OBC reservations policy correctly and that no discrimination had been made against the candidates. “With due respect and regards to the commission the University assures that we have followed all rules and regulations in a transparent manner for the admissions and there is no discrimination and injustice done to the candidates. The OBC seats have been filled by the meritorious OBC candidates from the merit list,” the VC said in his letter.

The NCBC had questioned the VC about the admissions of Adduri Mukteshwar and Harshini Devi. The Commission had conducted investigations into both cases and directed the University to grant them admissions. The NCBC had questioned if the University had found that any of Adduri’s research publications or claims of research experience had been found to be fake. The VC replied ‘no’ to the question, “The University received a few complaints dated October 25,26, 2020 on discrepancies in the PhD selection process. As per the University practice, the complaints were forwarded to the Head of the Centre and Dean of the School for their observations and comments. The Head of the Department submitted her comments with regard to the interviews conducted for MPhil and PhD Social Exclusion and Inclusive Policy.”

“At the time of the interview, the admission committee resolved that for publication preference would be given for CARE listed journals. For the research experience it is considered for at least one-month duration for MPhil and one-year duration for PhD. The candidates were asked to produce the evidence in support of their claim of publications and research experience. After the complaints were received the VC constituted a committee. The Dean Committee has given their reasons for rejecting or accepting the weitages given to the candidates in MPhil and PhD,” the VC informed the NCBC. The administration defended its position by stating that the Adduri was not the only one to lose weightages and that there were many others.

“In the case of Adduri, the Deans committee has mentioned his publication as - the quality of the article is not of standard worth considering the weightages of marks given to publications. Adduri was pursuing his MA Political Science as a regular student in this University during 2018-2020. The research experience claimed by him is during the same period while pursuing his MA and hence the Deans Committee mentioned that there is no evidence of full time research while enrolled for his MA programme,” the administration stated. The VC said that as per the UGC Regulations, they would have had to call 111 candidates for five PhD seats but that the administration had only called 36 according to the 1:6 ratio (1 seat - six candidates) which they had been following since 2017-2018. If the University has to call candidates as per UGC Regulations, 2016, as advised by the NCBC then 75 more candidates need to be called for the interview. 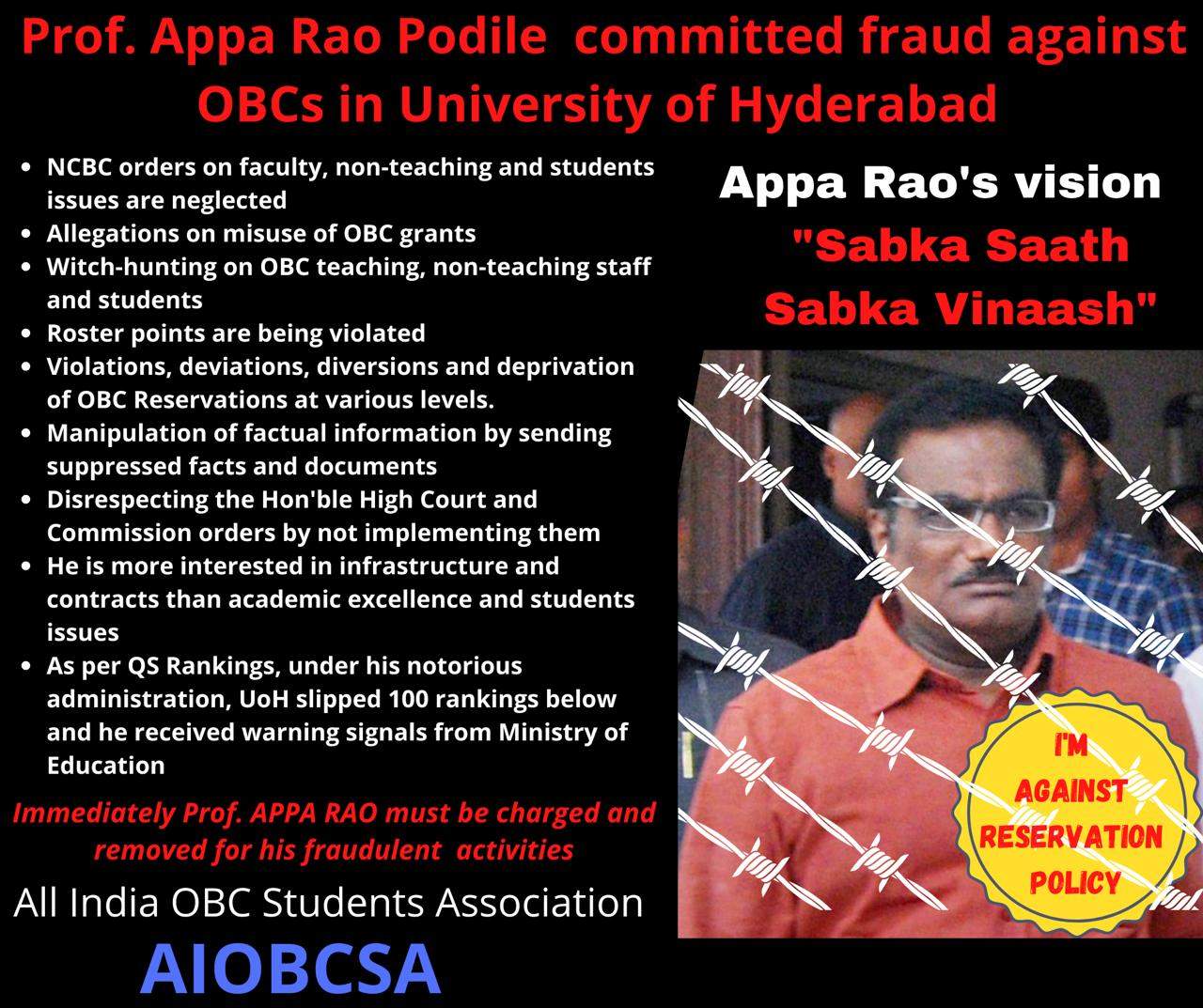 The NCBC also sought the University Action Report on the issues it raised after their investigations, to which the administration claimed they were in the middle of sending. The Commission had also wanted to know why non-teaching staff who participated in the protests had been issued show-cause notices. The administration defended its move by stating that the workers were bound by the Conduct Rules which prohibited them from taking part in protests which is ‘prejudicial to the interests of the University’. To the question about whether the University was following UGC guidelines in PhD admissions, the University said it was ‘as approved by the Academic Council of the University’.

The reservation norms are set in stone, the VC said. “The University follows the reservation rules of the government as communicated to us through the Ministry of Education and UGC from time to time for admissions. The roaster is put on the website and is part of the prospectus. It is certified by the Liaison Officers of SC/ST, OBC and Chairman, Empowered Committee for Differently Abled Persons, Deputy Registrar. It is reviewed by the SC/ST/OBC admission grievance committee of the University,” the VC told the NCBC.

However, the All India OBC Students Association has refused to accept the administration’s explanations. They’re now seeking the removal of the VC for ‘committing fraud’ because the NCBC orders were ‘neglected’. “There are allegations of misuse of OBC grants. Witch-hunting of OBC teaching and non-teaching staff and students and violations of OBC reservations in various levels,” the AIOBCSA claimed.