This 19-year-old has hitchhiked to over a 100 cities across India. This is his story

On August 25 this year, Rohan Agarwal left his home with just a backpack and Rs 2500 in his wallet. Little did he imagine that he would be able to travel to over a hundred cities with just that, thanks to the kindness of strangers who gave him a ride, fed him and welcomed him into their homes.

Rohan had always been impressed with the gurukul system of education in which students had to undertake a Deshantan (journey across India), at least once during their course of study. The journey had to be completely on foot and the one rule was to never ask for food, shelter or anything else. The intention was to learn about India's culture, its people, broaden one's perspective on life and learn practical life skills. Rohan decided to imitate the same practice, with the exception that he would also hitchhike when possible.

But before he became a traveller, Rohan had hardly been out of his house. In fact it was only when he was 17 that he went on a trip without his parents for the first time. He had travelled to Pune for a wedding and his parents had warned him that it might not be safe. During his trip, he tried to do a bit of sightseeing, but his phone was dying, he didn't have his wallet with him at that point and his train was about to leave. He couldn't contact his friends and nobody around trusted him enough to help him out. He realised that it was exactly how his parents had warned. That was until a kind policeman came up to him, asked him what was wrong, gave him some food and helped him call up his friends. That day Rohan realised that there certainly was kindness among people. He became more confident about travelling alone. 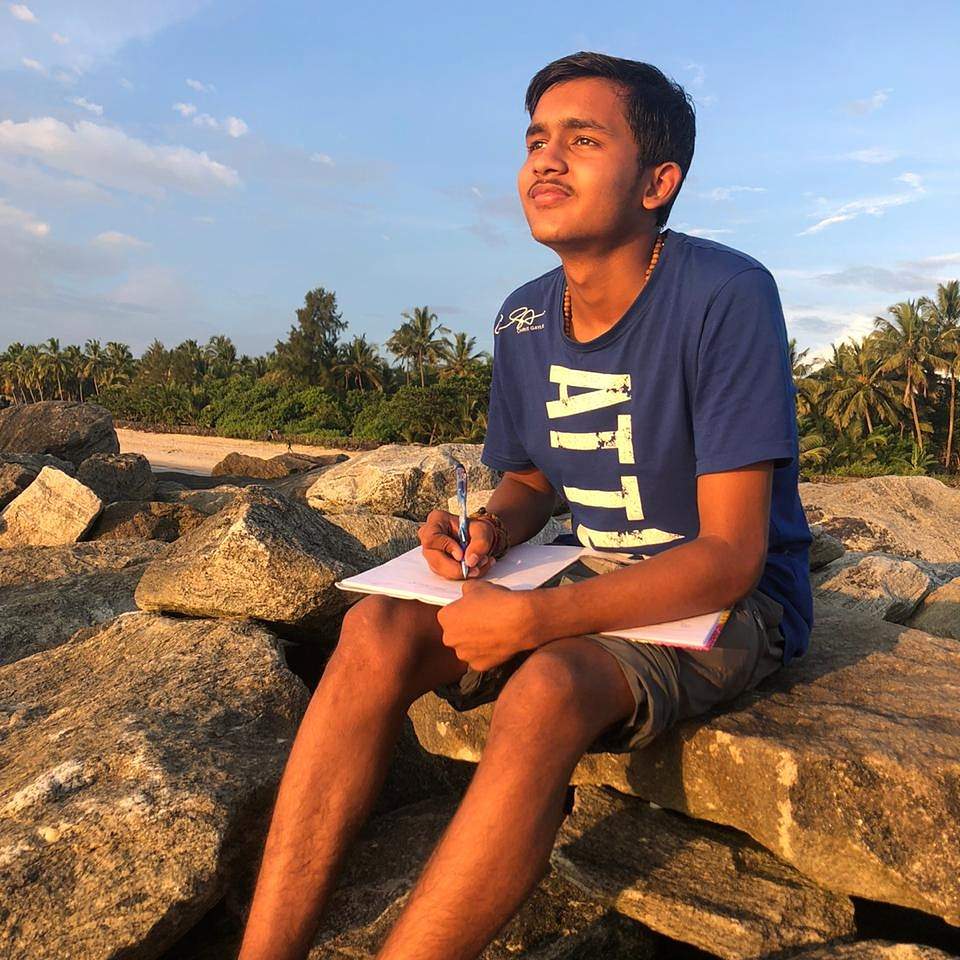 The next trip he took was to the Himalayas in 2019. He had been cold and hungry when a pujari in a temple welcomed him in, fed him and even gave him some warm clothes. From then on, Rohan took travelling seriously and on August 25 this year, he decided to go on a long trip, at least for 60-70 days with just Rs 2,500 rupees in hand. He was able to travel to UP, Rajasthan, Delhi, Haryana, Uttarakhand, Himachal and Chandigarh. Except for one unfortunate incident where he was robbed, and another where he was held as suspect in police custody for three hours, most of his journey had been a good experience.

For instance, Rohan explains, "There was a man who ran a tea stall and noticed that I was trying very hard to get a lift for a long time. So he paid for my bus ticket. In Chandigarh, there was another man who took me into his house at 4 am. I couldn't believe that such kind people exist. One guy even booked a train for me from Nagpur to Tirupati."

Recalling one instance when he almost starved to death, Rohan says, "Someone dropped me off at the steps to Tirumala and I was told I'll get free food on the way. I started climbing, I reached half way, but I didn't find any food. Then I climbed almost 11 km to the top, only to find out that the free meal would be served only after four hours. It was a very difficult wait, specially because I had resolved I wouldn't ask for anything. After 30 hours I finally got food and that has been the sweetest food I've had till date.

Rohan has several stories of kindness to share. He loves to hear people's stories, learn about their culture and tell them his stories too. He has gotten rides on bullock carts, trucks, mini trucks and bikes, apart from a lot of walking. Only two trains and about four bus tickets were sponsored. "People have always been kind to me, given me shelter, fed me, given me a ride and gone out of the way to help me. I've stayed mostly in people's houses and once a couple invited me to a hotel. I post on social media about my travel, and inform whatever connections I have. People have always responded and welcomed me. I found Kerala especially  welcoming. There are several groups for solo travellers that I post about my travels on." 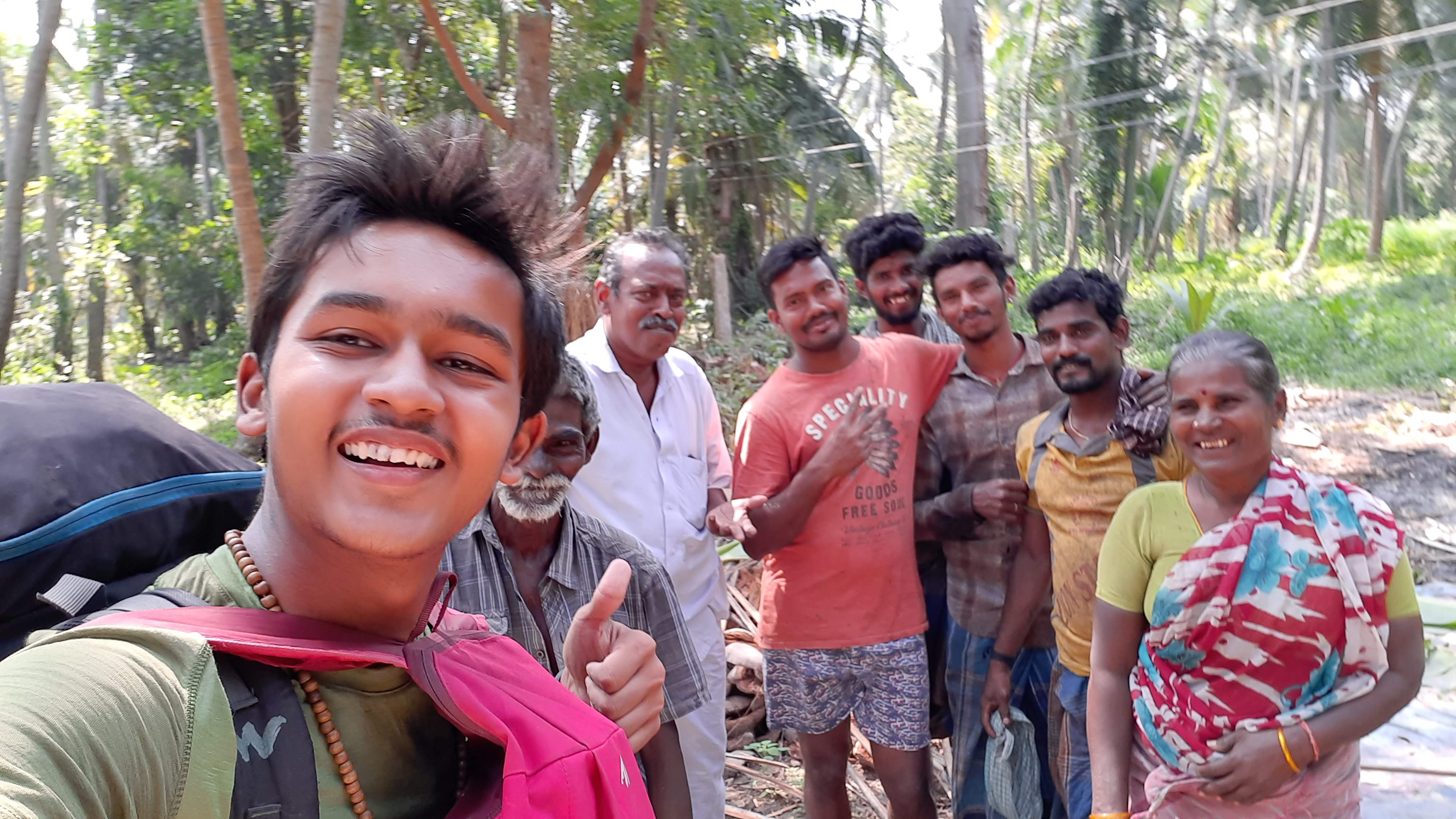 Rohan with the locals

However, the most inspiring part of Rohan's travel is that he has managed to continue his studies as well. "Studying and travelling together is not easy, but it is possible. Sometimes due to lack of network, I have to stop wherever I get network and listen to the lectures. I'm currently pursuing my second year BCom from G S College of Commerce and Engineering, Nagpur. I plan to do distance learning in my third year."

When asked how long he plans to keep travelling, he says, "Tourists can plan. I cannot plan how long I'll be travelling. It depends on how long people host me and help me." While it's human to doubt people's intentions when they try to help, Rohan says that he has learnt to always trust people. "I believe that people are generally kind and helpful. That's why I'm travelling, to let people know that you just need to get out of your comfort zone and explore the world," he says.

Rohan set out on this journey to explore the country, to broaden his thinking and learn life. Almost 140 days later, he says that he has become very patient, learnt to believe more and learnt to give as we receive. For instance, he may not have had money to offer in exchange for food and shelter, but he offered a listening ear, a shoulder to cry on. He comforted a man who wanted to commit suicide, he volunteered in several NGOs, and when someone hosted him in their house, he offered to clean the place,  washed the clothes, make tea or cook. He helped a 75-year-old Hungarian lady who took him in learn English and manage her home. He worked in exchange for food in dhabas because he resolved not to ask for anything for free.

In the future, Rohan hopes to start a school for underprivileged children in his ancestral town in Rajasthan. While his parents don't really approve of his journey, Rohan believes that they are from different generations and their perspectives on life are not the same. He believes that he doesn't always have to agree, but he does respect them and stays connected.