School on a skywalk: This NGO educates children on the skywalks of Mumbai's railway stations

From training them to be ready for school to providing food, convincing their parents and providing transport, this NGO is doing everything it can to ensure these children continue their education

If you walk through the Khandaveli station in Mumbai at around 11 am, you would come across the most endearing sight. A group of kids gathered together on their mats, with their pencils and books in hand, learning to read and write, reciting poems and playing games.

The skywalk is their school.

There are no big buildings, no blackboards, no uniforms and no desks like other schools, but these children have more drive (junoon) in them than their peers to educate themselves and do better in life.

Junoon Foundation was started in 2018 by Haimanti Sen to educate children living in the slums and get them ready to join a formal school. Apart from Khandaveli station, the NGO has three other centres in Mumbai, all of which are on the skywalks of railway stations. 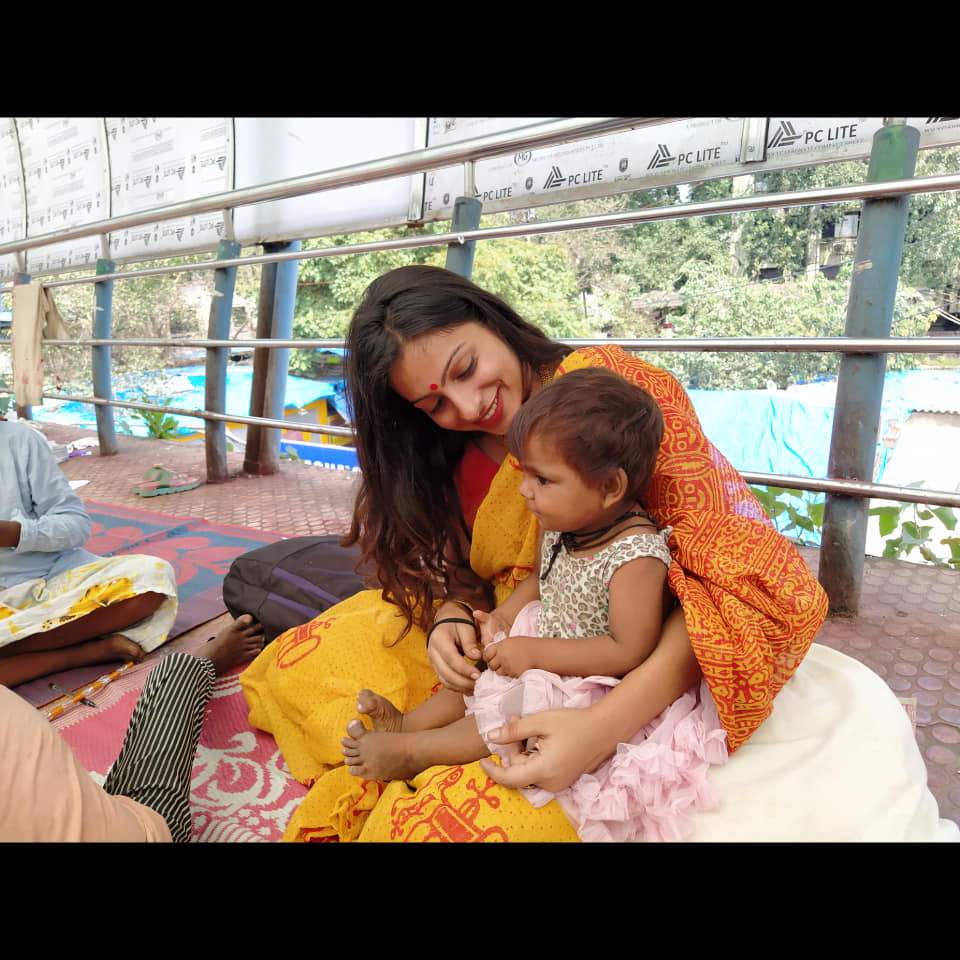 Haimanti explains her journey, "In Mumbai, everywhere you go, you see children selling goods. It got me thinking that the government has so many schemes in place to educate these people, but do the families really know about it? That's what drove me to go find out about the ground reality." Haimanti has had about seven years of experience teaching children. She was a drama and elocution trainer for different schools. She also used to conduct after-school tuitions. So she knew that she really liked working with children. But she also realised that she didn't want to work in a school per se.

"The basic idea," she explains, "Was that I wanted to find children who are not going to schools and put them in schools. I was studying about the Right to Education and all the other schemes that are there. I went to Khandaveli Railway station, went to the slums there and asked the people if their kids go to school. There were two government schools in the area and about 15 houses. I walked a little further to the railway track and saw a group of kids who were not wearing clean clothes, begging. Their parents were sitting in front of them. I also saw a couple of vendors and asked them if their kids go to school. They nodded yes. But I had my doubts. To me, it really sounded like they were trained to say that in order to avoid people judging them for letting their kids beg." 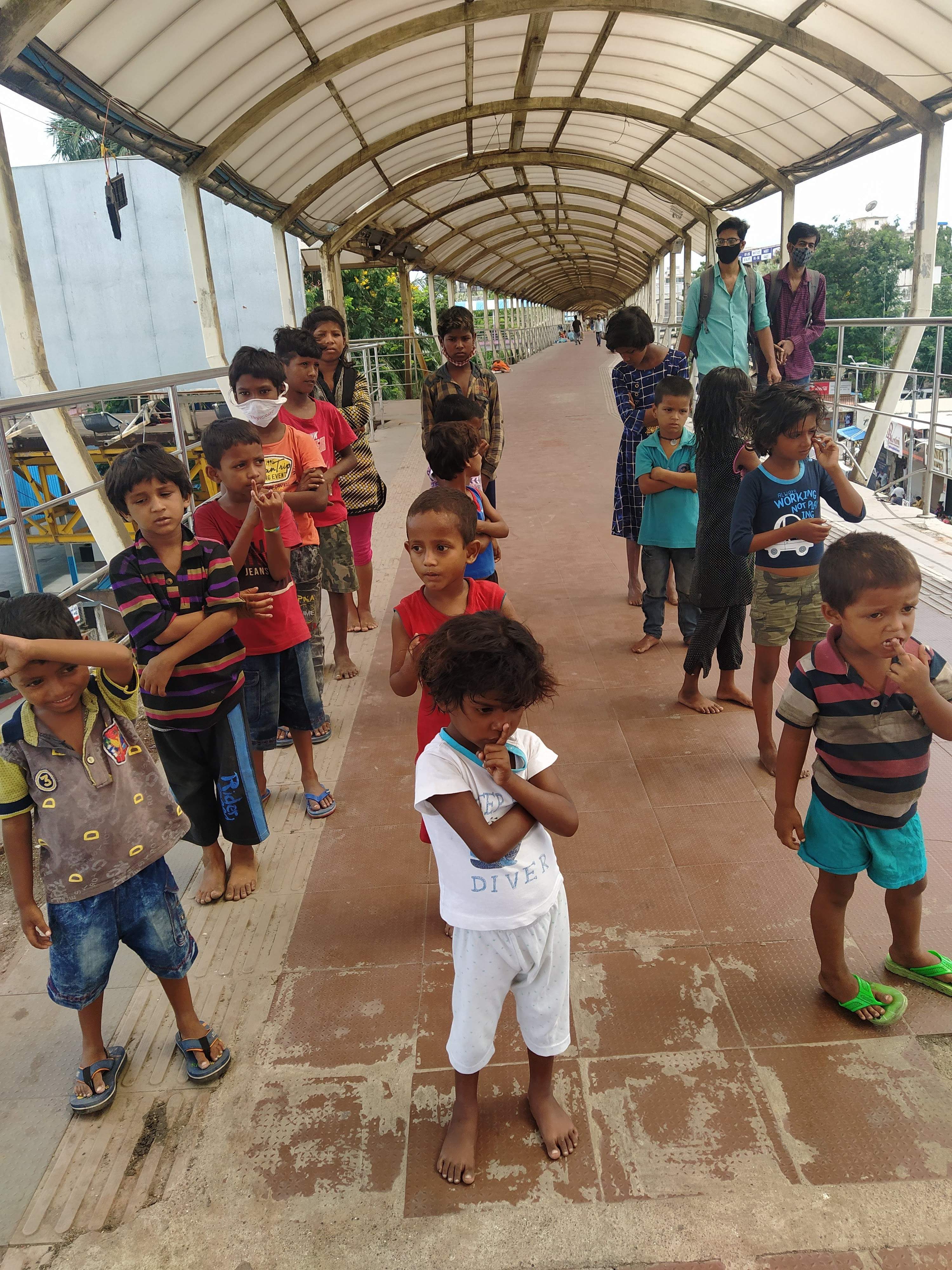 Children during an activity session

When Haimanti saw the children, she immediately knew that they don't go to school. So she told their parents that she would come on alternate days and teach them English. She wanted to establish a bond with them before sending them to school. But when she started teaching them, she realised that they knew absolutely nothing.

So she went to meet the Principal of the BMC school in the vicinity. The BMC schools in Mumbai give you everything, from food to books. However, when she brought up the matter of these kids, the Principal gave her a few reasons why he couldn't take them in. He told her that they used to attend school, but they would just make use of all the amenities and never return for classes, or they would abuse others. And that's when she took it on herself to train them to be ready for school. She explains, "I knew it wouldn't be possible to put an 8-year-old in second grade if she doesn't know the alphabet. So I decided to bridge the gap and then put them in the formal education system, while still providing the help or tuition that they need." At Junoon Foundation, there is equal emphasis on extra curricular activities

Across the four centres, classes start at 11.30 am. The staff reach the station skywalk, use the mats and put up charts. The children are divided according to their age groups. The staff have also designed the syllabus according to the children's ability. They also have extra-curricular activities like art and craft and sports. After studies, they have their lunch and then disperse.

From the very first batch itself, Junoon enrolled six of them in schools and when their school was on, the team would go pack their lunch, get them ready for school, drop them and pick them back from school to ensure that they have all the support they need to keep attending their classes. Today, Junoon has about 80 children and several volunteers across the four centres. They provide lunch every day and also have a backend team that looks into marketing and fundraising. 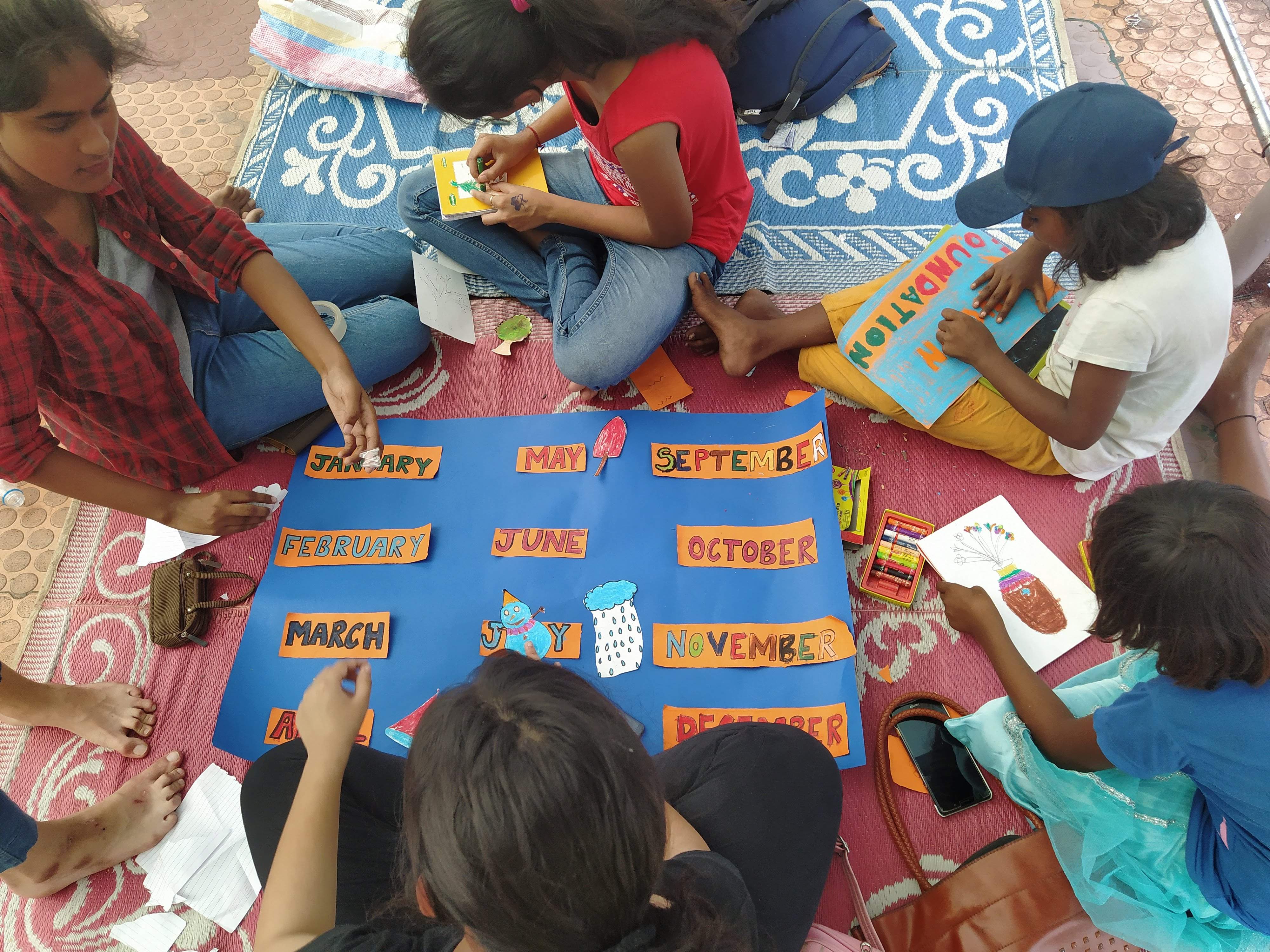 Students learn months of the year

There are volunteers who come in every single day and others who come a few days in a week. While most of their monetary support comes in the form of crowdfunding and individual donors, they are now working on generating funds through brand collaboration and CSR activities.

Junoon will be enrolling 15 students into schools this year. "When I met the first batch of kids, they did not know anything. Now six of them are going to complete two years of schooling. They've learnt how to read English and Hindi. They are regular in class, they're well-groomed and their parents are more proud of their children. One of them even topped her class and her Principal felicitated her in front of the whole school. All these children used to be beggars," says Haimanti, establishing the fact that you can really change someone's life if you want to.

But her favourite story is that of Ushika, a little girl with two younger brothers. "From the time that I met her, she was a bright girl and wanted to do a lot. But she couldn't because of all the responsibilities on her like washing the dishes, washing the clothes, begging and earning money to take care of her siblings. Her parents were never supportive of her going to school. But Ushika really wanted to do better. She had such drive. I used to teach her and I watched how she strived to learn. From making mistakes in drawing a letter, to when she was able to write complete sentences and now, even read to her friends, I've watched her grow. Ushika had to fight for it, she had to fight her mother, fight her father and do a lot to get to where she is now. In fact, she was once homeless. But now her parents have managed to get jobs and eventually bought their own house." 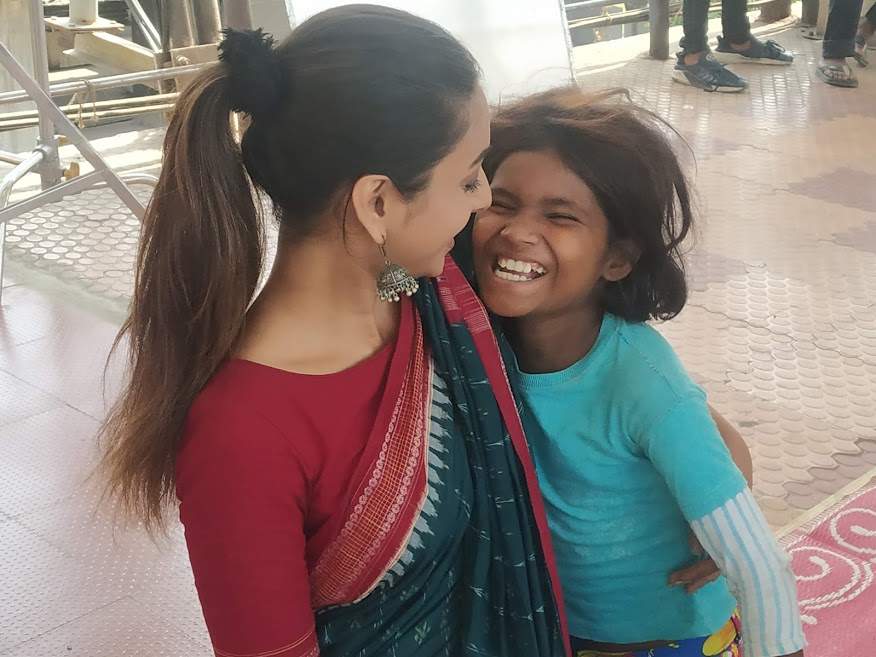 She adds, "Of the 35 families we've worked with, two have managed to get their own house after we started working with them. They have the skills, but they don't know how to use that to earn money. Ushika hopes to be a teacher or an air hostess some day."

If you're still wondering why the skywalk though? Why not a proper building? Haimanti explains, "Initially, I wanted a place to teach them. But now I've grown to like classes on the skywalk because we go the kids, they don't come to us. That's where it is most convenient for them. We understand that if they have to leave their homes, there won't be any food on the table. Also, it helps create awareness because a lot of people walk by and when they understand what we're doing, they volunteer to help in some way."

But Haimanti and her team have also heard a lot of negative comments from people who say that they are just wasting their time and that these kids won't get anywhere in life. "But we've seen enough change and we will keep doing what we're doing," Haimanti concludes.