India has been pondering on how to take high-quality education to the masses — most of whom are from rural areas. A team of four students from Army Institute of Technology, Pune, has developed a platform to enable education in rural areas. It aims to solve the ad hoc nature of volunteer teaching from urban areas and also counter other problems like live classrooms across a bandwidth as low as 1kbps. It has real-time multilingual translation and teacher quality assessment. And they won Solve4Bharat’s annual 24-hour hackathon by PanIIT — a network formed by IIT alumni across the world — in Bengaluru recently.

Stressing on three focus areas – Urban Development and management, Wearables and Tech for HealthCare and Education and Awareness — the hackathon saw some other amazing talent as well. A team of five from Atharva College of Engineering, Mumbai called ‘Trial & Error’ earned themselves Rs 2,00,000 as the first runner up. They created ‘Vani’, a mobile application that promotes handsfree interaction for the doctors that blankets NLP and medicine suggestion by using speech to text converter to maintain electronic health records. 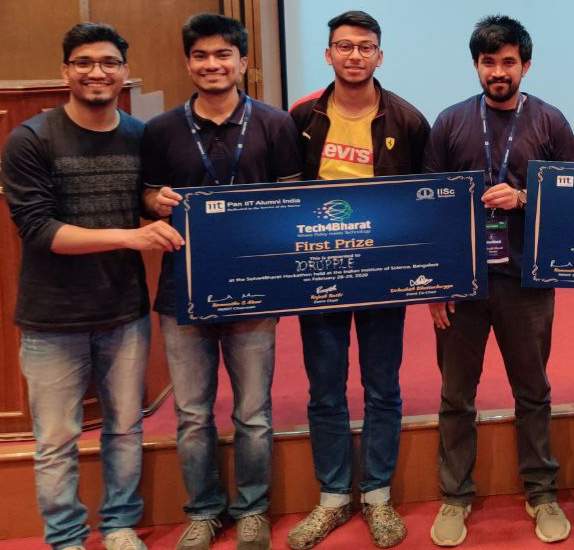 Rohan Chougule (22) from Pune, who graduated in 2019 from the Army Institute of Technology was a core team member of the winning team. Recently placed as a Software Engineer in BrowserStack, Mumbai, he says that the most challenging part was to keep their solution in line with the vision that whatever they built should be usable by the ones in rural areas with lesser bandwidth. "The aim was always to utilise the resources available at urban areas and reach out to the slower network regions.

There are two ends to it — though India is developing in terms of increasing the coverage of 4G in more and more regions, the bandwidth is yet to flourish. Just having mere coverage won't help as the available bandwidth goes down the second utilisation increases by a few people. Thus, our solution can still penetrate such regions and help in providing the much-needed education," says Rohan. "Anybody can start teaching without the need to travel to different regions, ie the ad hoc nature of teachers can be reduced in such rural regions. The multilingual feature allows teaching in multiple languages at once along with the ability to switch among them. The teaching is eventually done by a 3D avatar at the classroom end, thus keeping it the same for the students even if the teacher keeps changing at one end," he adds. They are looking at ways to get their solution to the market.

While Rohan's team took care of education, Nida Shaikh and her team from the Atharva College of Engineering, Mumbai focused on health. "There are very few Indians who maintain their medical records meticulously. Our creation would help them to maintain digital copies of their medical data. The target users of our application are the doctors. Our app will make sure that they never write prescriptions in their (infamous) handwriting," quips Nida, a student of the Computer Engineering Department. "None of us had ever worked with Natural Language Processing. There was no datasets available on the internet for our use case. Hence, for prototyping purposes, we had to build our own dataset. Challenging and very time-consuming. Also, deploying the ML model on the cloud was a tough feat to achieve for us," adds the student.

Participating in hackathons help students apply their existing knowledge and skills to build something which would be useful as a solution, feels Rohan. "The end result might not be a complete product, but can give you the confidence to build something great. It widens your horizon to think out of the box. Plus, the intense competition and mentoring helps you to think in varied directions, be it in terms of presentation, be it the code and features, be it the business model. And above all, the fun of gathering and networking is also worth the effort," he adds.

Nida, too, agrees with him, "The fact that one can develop an MVP in 24 hours is a big achievement for undergraduates. It also helps in building proof of concepts, and get instantaneous feedback from the mentors and judges. And of course, the networking and coffee."

Participating in hackathons has helped Rohan try out newer ways and technologies to solve problems in spaces like IoT, Blockchain, Financial Sector, Social Issues, Corporate Internal Issues, etc. It has also taught his team how collaboration can do wonders. "You get to know how you can apply your skills to build something viable and be proud of it. Along with this, you also end up receiving job offers after winning. The networking is again a plus point," adds the young engineer.