Anna University has decided to teach philosophy through a comparison of Indian and Western traditions, so there will be a mixture of of Plato and Arjuna's teachings along the way

Anna University has made it mandatory for its BTech IT students to study the Upanishads, yoga, Bhagavad Gita, Vedas, significance of chants, Krishna's advice to Arjuna along with a drizzle of Socrates and Plato as well. Four colleges affiliated to the University will be including the study of these subjects under its Philosophy subject for second-year BTech students.

According to the syllabus compiled for the BTech students from the Information Technology department, the University has decided to teach Philosophy as a mandatory course through a comparison of Indian and Western traditions. The University states that this is being introduced to bridge the gap between sciences and humanities.

Under the first unit titled 'Knowledge', the content prescribed is 'Vidya versus Avidya' -  Brihadaranyaka Upanishad, Isha Upanishad plus an introduction to Socratic debate and Plato's views. In the second unit, the students will learn 'Nasidiya Sukta' and also the Greek concept of chaos. The concepts of space - Udgitha, teacher-student relationship, Body and Speech -  Siksha Valli – Taittriya Upanishad. 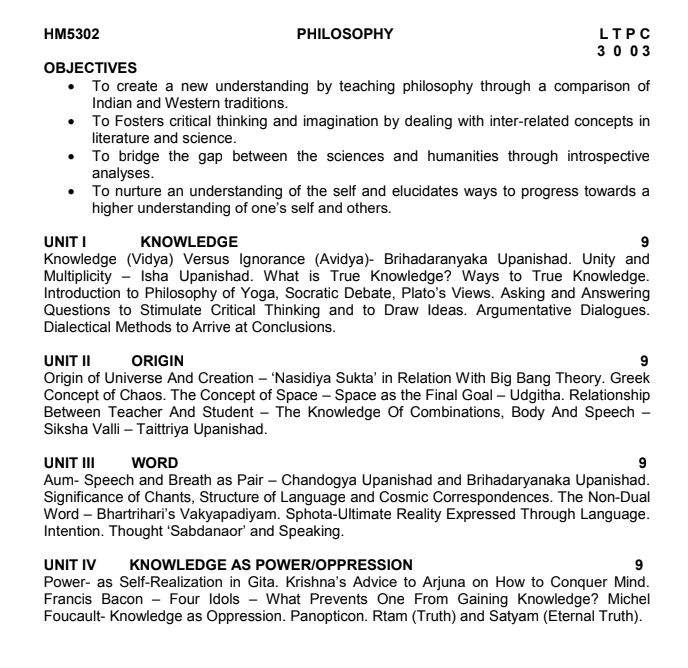 The fourth unit is called 'Word' and focuses on the significance of chants, structure of language and cosmic correspondences  —  Chandogya Upanishad and Brihadaryanaka Upanishad. The Non-Dual Word – Bhartrihari’s Vakyapadiyam. Sphota-Ultimate Reality Expressed Through Language. Intention. Thought ‘Sabdanaor’ and Speaking.

Besides the engineering students having to study about 'cosmic' correspondence, they will also be learning the advice that Krishna gave to Arjuna on how to conquer the mind. Francis Bacon and Michel Foucalt will also pay a visit in this chapter. The final chapter is interestingly titled 'Brahman' and includes content on subjects like the different chakras, stages of sublimation, philosophy of yoga and also aspects of 'feminine/masculine'. 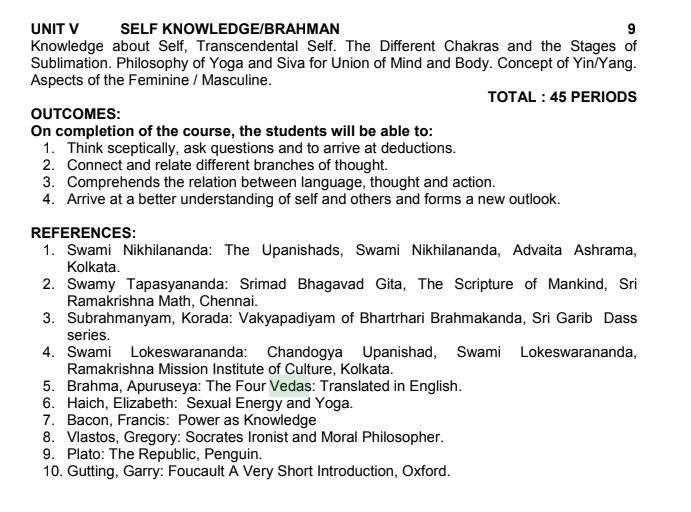 Prince Gajendra Babu, General Secretary, State Platform for Common School System said that it is not right for a University to introduce religious texts in a secular classroom, "These texts form the basis of religion and holy books should be restricted to Theological Colleges. It can neither be compulsory nor an optional course."

Prince said that the basic feature of the constitution is secularism and one of the Fundamental Duties is that every citizen be allowed to develop the scientific temper, humanism and the spirit of inquiry and reform. "For a state-funded university to include religious text is unheard of. Especially an engineering college. Science tells you to question and religion tells you to have faith, so why are we putting them at loggerheads. This way we are neither doing justice to science or religion," he explained.

He also spoke about how science was depended on the law of negation, "Newton discovered time and space but it was negated, then came Einstein and then came Hawkins. Same with evolution, first came Darwin, then came Mendel. Science depends on negation. Religion, on the other hand, demands that you have belief, so why are we trying to bring religion into our secular classrooms?"

The CPIM also released a statement in the matter and said that the introduction of the Bhagawad Gita and philosophy in technical education deserves condemnation. "It is against secularist fabric, in a college where students of all religions study the same syllabus it is like forcing one religion on them. It is disheartening that the TN government is agreeable to this. The CPIM state committee demands that the order be withdrawn immediately," said K Balakrishnan, state secretary of the CPIM.