Why was School Education Secretary Rina Ray removed from the MHRD?

Rina has been in the department from 2015 and has been part of major pathbreaking programmes in the past five years. No reason has been given for her sudden transfer

The central government on October 15 sent back School Education Secretary Rina Ray to her parent cadre. According to an order passed by the Ministry of Personnel, Public Grievances and Pensions. Rina, a 1984-batch IAS officer of Union Territories (UT) cadre, was named the Secretary of the Department of School Education and Literacy in the Ministry of Human Resource Development in May 2018.

The Appointments Committee of the cabinet has approved repatriation of the IAS officer to her "parent cadre with immediate effect", the order said without citing any reason. Information and Broadcasting Secretary Amit Khare (1985 batch) will take over the charge of the post of secretary, the Department of School Education and Literacy, said the notice signed by Secretary of the Appointments Committee of the Cabinet and the Establishment Officer PK Tripathi. But the notice does not say why such a drastic decision was taken. Calls to the School Education Secretary's office went unanswered. 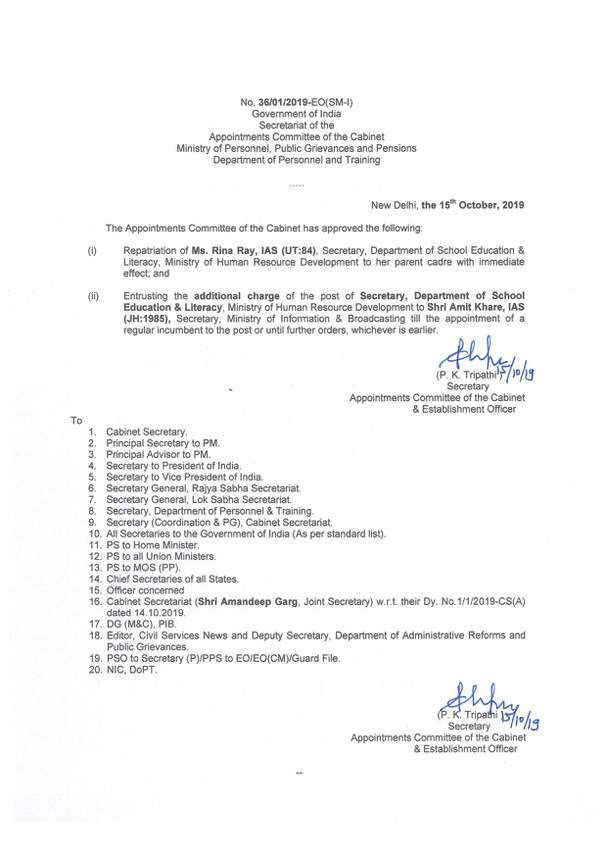 Rina hails from Bihar and has majored in political science apart from various environment, finance and personnel & general administration training programmes from the United Kingdom. In 2015, she was appointed as Additional Secretary, Department of School Education and Literacy, HRD. Prior to it, she was Chief Electoral Officer, Andaman & Nicobar Islands. She took over as School Education Secretary on the superannuation of Anil Swarup on June 30, 2018.

Rina had continuous involvement with cumbersome task for the ministry — she has been involved in a mammoth sample survey, involving 22 lakh students from around 1,10,000 schools across 700 districts of India — both rural and urban. She has also been part of some of the other reforms like Introduction of the four-year BEd integrated programme with multiple pathways, the introduction of Guideline on Strengthening of District Institutes of Education and Training (DIETs) and DIKSHA (Digital Infrastructure for Knowledge Sharing) as well.

“I am something of a teacher in this department and an unconventional bureaucrat at the same time,” Rina had told Business World earlier this year.