After one week of debilitating hunger strike, JNU students to march to VC's office for one last stand

The students are now risking severe and lifelong health complications, but the VC remains silent. Will the march change things today?

It has been exactly a week since eleven JNU students started their hunger strike to protest against the administration's policies. Some of the students have been in and out of hospital but have not given up. However, doctors have warned that continuing the hunger strike would mean that the students would risk permanent damage to their organs. Yet, there has been no word from the Vice Chancellor.

Former JNUSU President Geeta Kumari was rushed to the hospital for the second time today since she started her fast. According the JNUSU, she is now also suffering from severe heart problems and was shifted to Safdarjung Hospital. Earlier on, another former JNUSU member Shubhanshu Singh contracted jaundice and was rushed to the hospital too. All the other students are suffering from low BP and sugar levels as well. "If the hunger strike continues, the doctors have told us that the students risk permanent damage. They could suffer from the impact of this for the rest of their life. Some of the students might be forced to call off their strike today if their situation gets more grave," N Sai Balaji, the President of the JNUSU said. 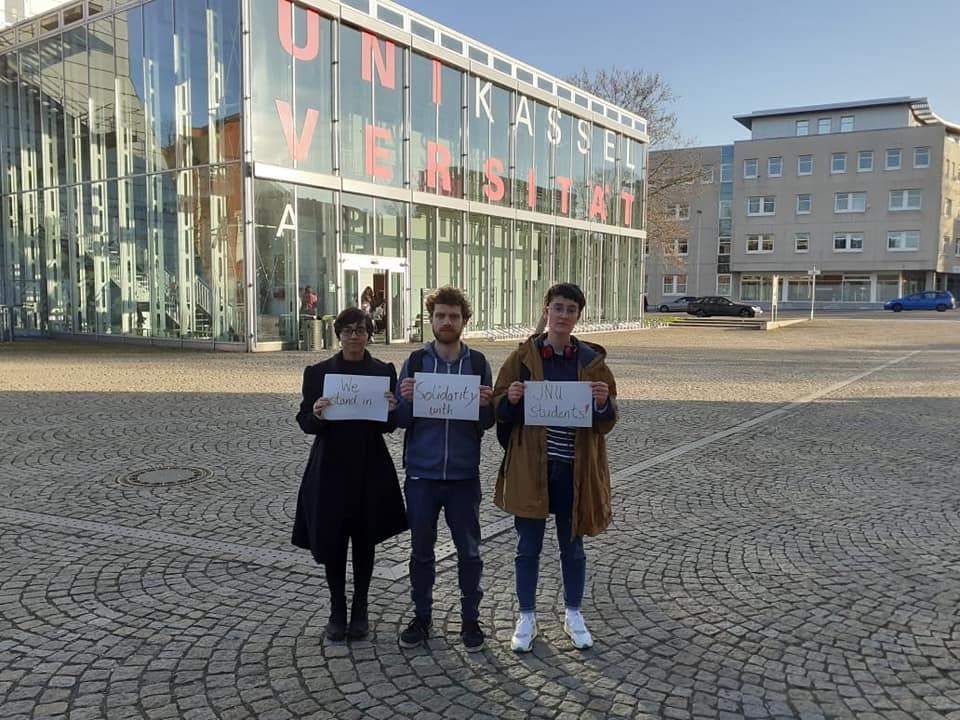 Global support: Students from different parts of the world are showing their solidarity to the JNU students

Since the VC and the administration are continuing to stay mum on the issue, the students have decided to march to the VC's office and demand an appointment. "He is refusing to come and talk to us so the only option we have is to go to him. He will be forced to speak to us at least then," Balaji said. He also said that they will ensure that the VC speaks to them before he leaves for the day, till then they will remain outside his office.

The students had previously tried to speak to him during Holi but he only wished them for the festival and attempted to make them eat the sweets he was distributing. The students took offence to the VC's gesture, calling it humiliating. He had refused to listen to their pleading for a meeting.

Today, the JNUSU and other supporters will be marching to the administrative building at 5. Various institutions from across the country have come out in support of the striking students. They have also received solidarity from students from foreign countries as well. "It is a moment of great pride for us that students from so many different campuses are supporting us. JNU has stood up for many causes in the past and now people are now helping us in our time of need which is truly great," Balaji added.