The Pondicherry University Students Union has called on students and alumni to boycott their convocation to be held tomorrow. The Union has urged students to be present at the ceremony but refuses to accept their degrees from President Ramnath Kovind's hands, the chief guest of the occasion.

Several students have also taken to social media to state that they stand in solidarity with the nation-wide protests against CAA and NRC and are therefore boycotting the convocation. Some of the students are also gold medal reciepients but have decided to not accept their medals on the occasion. One Karthika Kurup who is to receive a gold medal in 'Electronic Media' said she was standing in solidarity with the protesters and will refuse to accept her medal. "Firstly I'm a citizen of this country. Everything else is secondary and so as a citizen, this is the only thing that I can do in my capacity - to refuse this medal from the President. This decision hasn't been influenced by any political party or any group. This is all I can do as an individual to show my dissent and so I'm doing it," she explained. 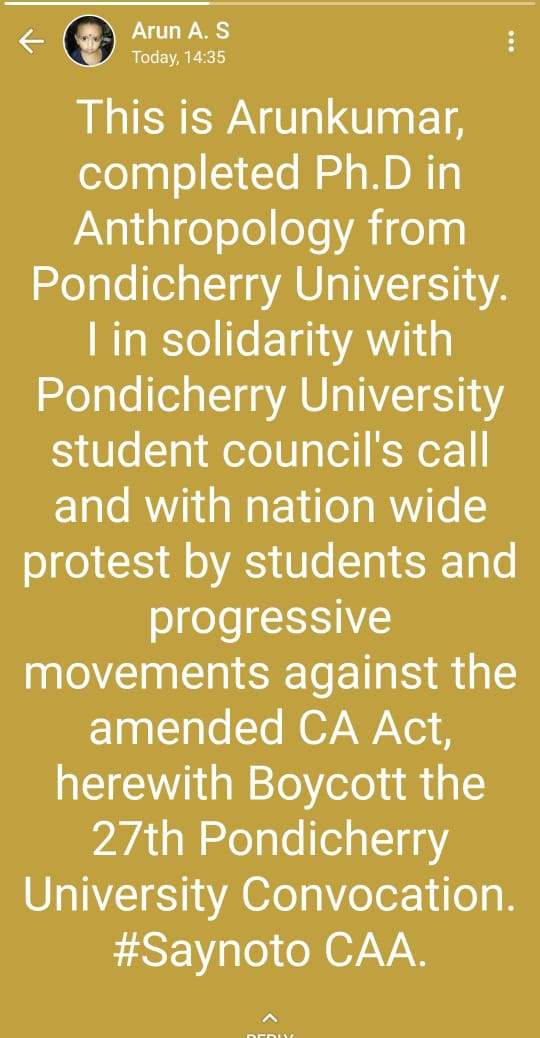 Two days ago, the Union released a statement saying that they had been asked to facilitate the convocation and ensure its smooth functioning. However, they wrote that they had refused to do so since the President of the country would be attending it. They had then asked the students also to reconsider their participation in the event as well.

"We urge you to peacefully and constitutionally register your disappointment in the President and your dissent. We urge you to be there at the ceremony but not accept your degrees," the Union said.

"This required us to be immensely brave and we understand this. But these are also brave times and if you look at the way the students and people are protesting and if tomorrow we look back at this moment of welcoming ourselves into a new world let us look back at how young we were and how right and how brave, so very brave, " the Union wrote in their appeal to the students. Ever since, students have reached out to the Union to extend their support, promising to boycott/ not accept their degrees from the President.