Jamia Millia violence: Here's what happens to your body when you're hit with tear gas

Tear gases are chemical compounds that irritate the eyes, skin, lungs, and are capable of having an effect on various other organs. They can also cause people to become non-functional

Tear gas isn't new, but do you have any idea what it feels like to be hit with it?

The ongoing protests against the Citizenship Amendent Act at Jamia Millia Islamia University spiralled out of control on Sunday evening as the Delhi Police entered the campus, baton charged the protesters and threw tear gas shells into locked libraries and rooms where the students said they were studying. Videos of police brutality have been circulating on social media since Sunday night. Several students have allegedly shot with rubber pellets and a lot of them are currently under treatment in the hospital.

The Chief Proctor in Jamia, Waseem Ahmed Khan took to Twitter to say that the police had entered campus with force and without any permission and that they were beating up students and teachers. Various students also took to social media to send out SOS calls for help claiming that the police are firing at them and brutally attacking them. 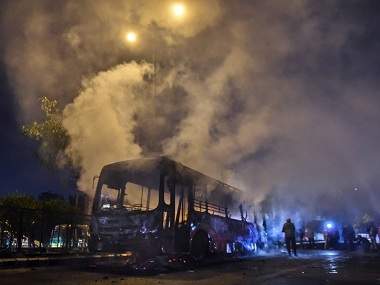 How dangerous is tear gas and what does it do to your body?

Tear gas seems to be the most obvious choice of weapon for the Delhi Police recently as a means to control violent groups of protestors or angry mobs. Tear gas can have long-lasting and harmful effects on a person's health and well-being. We break it down for you here in terms of what tear gas is composed of, what it does to a human body when it is exposed to the gas and how one can use a few methods to prevent a large amount of the gas entering their bodies.

Tear gas agents are not only gases. Some of them are solids at normal temperature that are suspended in solution and sprayed as aerosols. There are different types of compounds that may be used as tear gas. Chloropicrin (Cl3CNO2) is one of the types of tear gas which is also called trichloronitromethane, a toxic organic compound. Its vapours are capable of causing irritation to the skin, eyes, and upper respiratory tract, and it is known to be used in chemical warfare. This type is manufactured by the reaction of nitro methane with sodium hypochlorite sodium hypochlorite — (H3CNO2 + 3 NaOCl → Cl3CNO2 + 3 NaOH).

How will you feel when hit by tear gas?

Tear gases are chemical compounds that irritate the eyes, skin, lungs, and are capable of having an effect on various other organs. They in turn, make people unable to function, as the Center for Disease Control and Prevention (CDC) explains. In general, tear gas can cause a stinging and burning sensation to a person’s eyes and mucus membranes (including those in the lungs), salivation, watery eyes, runny nose, tight chest, headache and nausea, the World Health Organization (WHO) states. How did it feel for Jamia's students?

The students at Jamia who were hit by tear gas said that they felt like the world around them was coming to an end. "It felt like the world is going to end. We were not being able to breathe. Everyone around me was choking up. We could not see anything. This was not the first time I was in a protest that was hit by tear gas shells. But this was apocalyptic. I thought we would die — if not from the lathi charge, the gas would suffocate us to death," Chandan Kumar, a third year Mass Communication student at Jamia told Edex.

Another student at the varsity, who is also a member of the All India Students' Association said that they won't back down even if anyone attacks them even after this incident. "I did not feel for once that I will back down. Goli bhi khaani pare toh khayenge (Even if they shoot us we won't back down). This is for our rights. if we don't stand for it ourselves, who will?" the student, Akhtarista Ansari added. Can you stay safe through it?

According to several research papers and studies, the most effective defense against tear gas is a gas mask. However, gas masks and filters aren't easily available to civilians. They can temporarily reduce the amount of tear gas entering the body, giving a person a few extra moments to escape. The best step, however, is to leave the area as soon as possible. It is also extremely crucial for anyone exposed to tear gas to wash out their eyes thoroughly until the symptoms begin to subside. If the person is wearing contact lenses by any chance, they need to be removed and thrown away immediately. Apart from tearing and involuntarily blinking, the gas also has the ability to cause a longer-term inflammatory response in a person's eyes and skin — and this can take a few days to subside. Initially, it's always recommended that victims take cold showers, as warm water can open up a person's pores, allowing further tear gas particles to enter.