After teachers kicked up a storm in reaction to the circular, the meeting was cancelled and R Rajagopal said that it had been issued without his knowledge

After outrage was caused because teachers of the Bharathidasan University in Tiruchy were asked to dress in 'pleasing attire' for a meeting with R Rajagopal, the Governor’s Additional Chief Secretary — the meeting was hurried called off on Thursday morning.

Many of the invitees were shocked at the language in the circular which not only did not mention any specific agenda, but asked them to 'up-dress in pleasing attire' for the event — which many of them felt was derogatory. “Asking us to dress up in pleasing attire was insulting. We are supposed to stand before students each day. What exactly was meant by the statement?” wondered another staff member.

The circular signed by the Registrar was dated Wednesday and the meeting was scheduled in the University on Thursday. It was said in the circular that Rajagopal was to interact with deans, directors and co-ordinators of the University.

Speaking to Express, Additional Chief Secretary R Rajagopal said, “I am not going to Bharathidasan University today. The university officials may have thought that I would drop in on my way to South Zonal Cultural Centre at Thanjavur. They have not asked me before issuing the circular.” 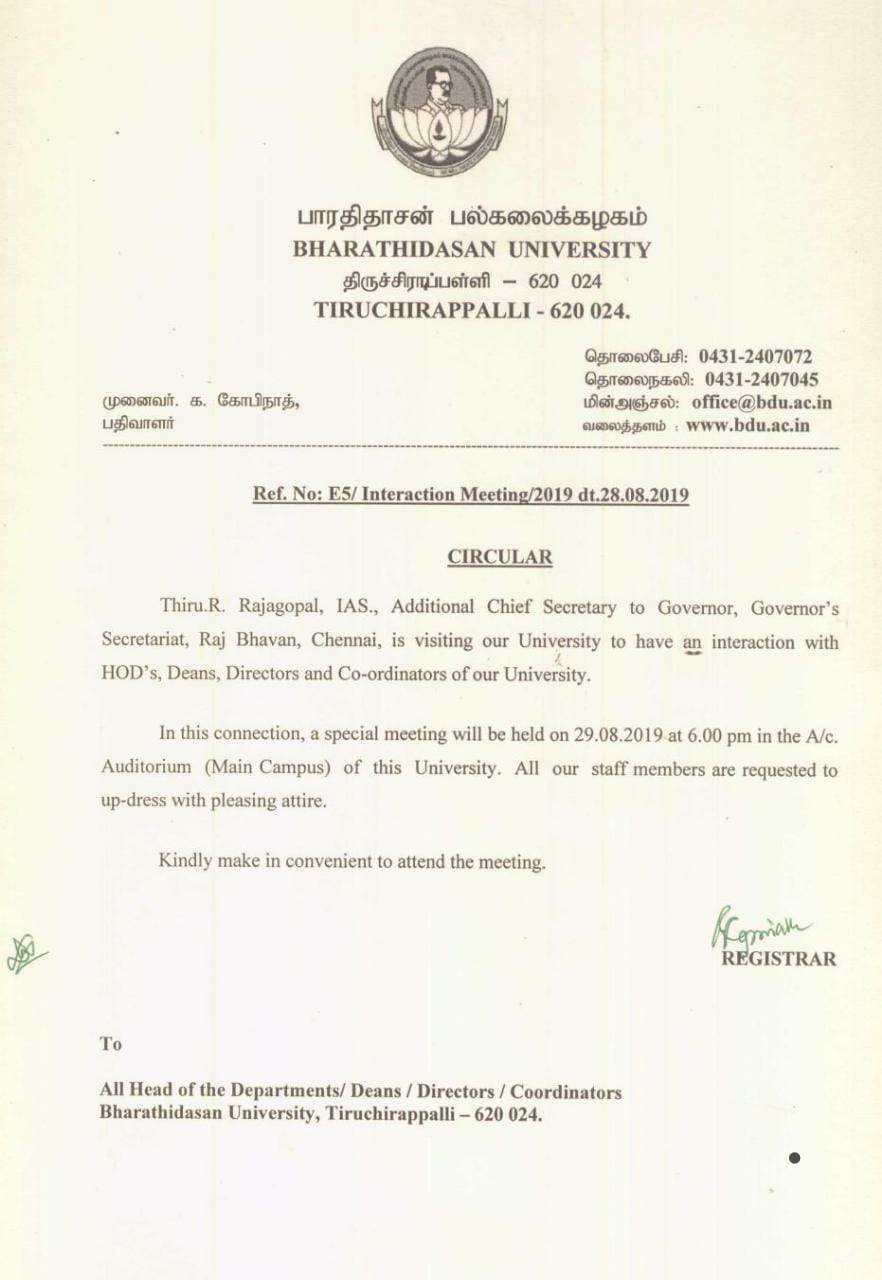 The meeting was also criticised on the grounds that it amounted to bypassing authority, though the Governor of Tamil Nadu is the de facto Chancellor of all State Universities. M S Balamurugan, General Secretary of the Association of University Teachers (AUT), said, “It is clearly bypassing the authority of the Higher Education department of the state. They chose to do this without consultation or involvement of the department which AUT condemns.”

“Apart from stating the time and the venue of the meeting, there were no clear details about the meeting, especially the agenda,” said a member of the Teachers' Association of Bharathidasan University.

Tamil Nadu Governor Banwarilal Purohit was in the eye of a story almost a year ago when his name was dragged into a sex-for-academic-favours racket in which a teacher called Nirmala Devi from Madurai Kamaraj University was implicated. The case is still ongoing but the Governor was given a clean chit, as per the subsequent investigation.

Educationist Prince Gajendra Babu said, “The Governor performs the role of Chancellor in a decorative capacity. A formal meeting with university stakeholders to be chaired by the governor’s secretary is unreasonable. The Vice-Chancellor and the Higher Education Department hold authority. With the higher education department not involved, the meeting is just bypassing authority. This is the first time I am hearing about such a meeting.” The registrar and vice-chancellor were not available for comment.