Road accidents are one of our biggest fears. Aren't they? What scares us more are the horror stories of how people react to an accident. The uncooperative hospital staff, insensitive police and of course, the video-grabbers — these are the factors hit our minds during an accident.

But that's not exactly what happened to this IIM Kolkata professor's son! In fact, he was dropped home with all his valuables by people who absolutely didn't want anything in return.

The professor took to social media to thank the well-wishers and even praised the undying spirit of his city. 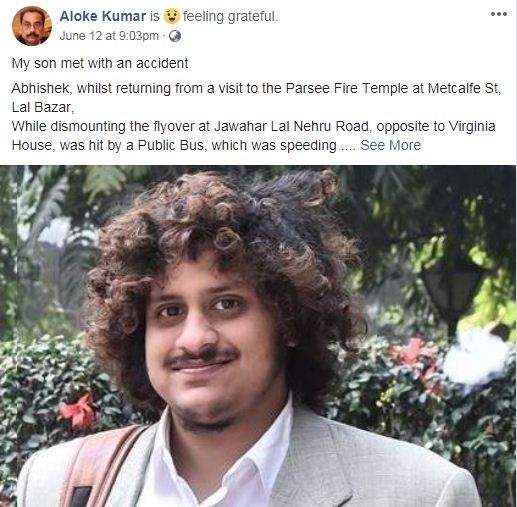 Read here:
My son met with an accident

Abhishek, whilst returning from a visit to the Parsee Fire Temple at Metcalfe St, Lal Bazar,
While dismounting the flyover at Jawahar Lal Nehru Road, opposite to Virginia House, was hit by a Public Bus, which was speeding .

He was thrown of his Vespa two-wheeler and hit the road with his helmeted-head.
He completely blacked-out for 5 to 7 minutes.
In the meantime, passers by and pedestrians gathered
and got him back to senses.
He was offered water.
His vehicle twisted was lifted physically from the main road and parked in the foot-path.
Some offered to take him to SSKM Hospital but he requested them to :
Call his father at his mobile
Reach him Home in a Taxi.

Many called 100 for Police.

They rushed him Home and one of them offered to stay until I arrived.
I took him to Sri Aurobindo Seva Kendra where he was attended.
A CT Scan of the brain was done.
Xray of his rib cage, which was hurting.
They started treating him and NOT insisting on Payment First.
24 Hours have passed and he is recovering.

The Police was polite and courteous.
When I told them that we will not be able to report to the Shakespeare Road Police Station they did NOT insist.
Friends from automobile helped to lift the two-wheeler and park it in a nearby safe place.

Who were these people who first came to his help,
called the police,
called me,
reached him home ,
paid the cab out of their pocket ?