An Indian Army Major on Wednesday accused the Air India staff at Delhi's Indira Gandhi International Airport of preventing him from travelling home to Varanasi by claiming that their flight was full. He added that his seat was allocated to an Air India staff member who wished to travel to Gaya in Bihar, prompting airport officials to delay his journey. The major was commissioned into the Army in 2013 after a year in the Indian Military Academy, Dehradun. He studied at the Sainik School in Tiliaya, Jharkhand from 2002-2009 and graduated from the National Defence Academy, Pune in 2012. He is born and raised in Buxar.

In a video that is quickly doing the rounds, a duty manager is seen escorting the officer who is heard asking him why he is being asked to delay his trip. "They kept telling me I will be put on the 5 pm flight instead of the 12.10 pm flight that I had booked on February 15," he added. 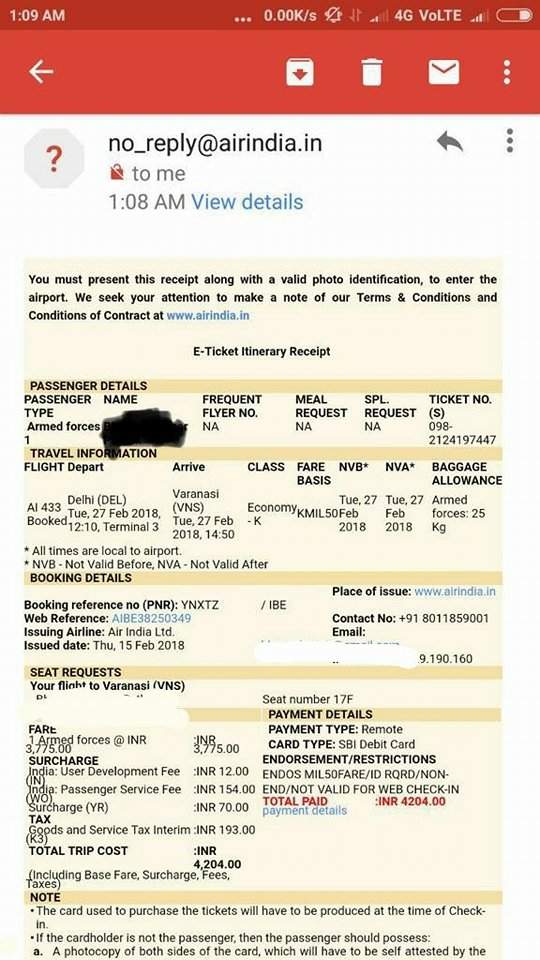 No entry: The ticket was booked on February 15,  two weeks before boarding

The video also shows the duty manager issuing a warning to the major, including calling security, after he documented the entire incident. The officer in question has also alleged that he was later surrounded by security personnel who threatened him and mocked him for taking a video. He lodged a complaint with Air India authorities though it is yet to be ascertained whether he has received a reply.

The major was later sent home to Varanasi on a later flight on the same day but has claimed to have received no refund or apology from the airline.