Purushu Arie, a Chennai-based fashion designer, wrote a post on his blog where he recalled discrimination for presenting a 'thin, simple' document

I joined NIFT Delhi with All India Rank 1 in my counselling and I had a semester back and it was the first time as an adult that I genuinely considered suicide as an option to put an end to this fight happening on uneven power disparities...

This is one of the few intriguing lines of a recent blog post by NIFT Delhi alumni and Chennai-based fashion designer Purushu Arie. In the ranting post on his blog purushu.com, Arie accused the fashion institute of being elitist-friendly and entertaining only those who had enough funds to make super-fancy presentations. 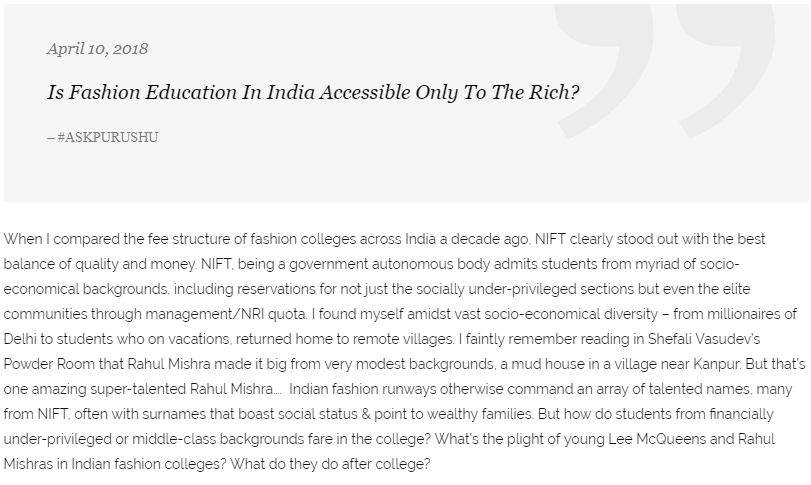 "Do students from financially under-privileged or middle-class backgrounds fare well in the college?" he raises the question. According to his post, the answer is a big 'NO'. And he confirms it with an instance that happened to him while submitting an assignment in college:

A prominent fashion designer, a regular at India Fashion Week in Delhi, was part of the external jury panel for the summer internship project I did in Bangalore. He literally asked me why my document was so thin (barely 50-something pages) when there were other assignment documents wearing the look of a telephone directory. Now he put that question to me even without going through the document, not even a rough flip. I bluntly told him I was financially broke, didn’t have the money to print as many pages (it costs about INR 20-25 a side those days at Nehru Place in Delhi) and hence compressed the same content in as many pages, it’s less cumbersome, friendlier to read & understand that way. Not that I ever expected him to buy those words but I was definitely curious to get a reaction from him – He gave me the dirt… And it turned out he also gave me the least grades.

The fashion designer is now running a blog-cum-fashion site with the name purushu.com. While he has around 5k followers on FB, he alleges that he struggled to even appear for the exams:

I was debarred from writing my last exam & my examination hall ticket was maliciously taken away by NIFT lab assistant without my knowledge before my last exam in my second semester at college in 2009. They literally hid it & asked me to collect it from the Delhi Center Coordinator Mrs. Usha Narasimhan. Apparently, there were differences held between Delhi centre & Head office on whether I should be given a chance to write exams since my attendance was 2% short of minimum requirement 65% in a subject which was earlier covered up on medical credits since I missed classes due to typhoid followed by chicken pox in January 2009.

He concludes by saying that, "Dronacharyas who discriminate students on virtues of birth or wealth have corrupted institutions of knowledge in India for years, but never ever let a small mind, regardless of age or socio-economical status or position of power convince you that you don’t deserve what you worked to earn."

A mail soliciting response to the blog post and the allegations therein sent to the Director of NIFT Delhi went unanswered.