The Accounts teachers from ISC, Kochi says that she's shocked at the amount of fake profiles that have been created and the kind of information they're spreading about in cyberspace

After being a part of a mind-blowing dance video set to the new Malayalam song Jimikki Kammal went viral, Sheril G Kadavan, a teacher of Accounting from the Indian School of Commerce, Kochi found that her life had changed in four days. A week and 8 million views on YouTube later, the young teacher speaks to EdexLive.com about the fear, love and expectations that her unexpected fame has brought her.

How does it feel to be the latest internet sensation?

I am completely blank! I participated in the dance just to get a kick out of it, it was the day after Onam and it was all in good fun. I never even dreamed that it would get the kind of attention that it has. It's completely out of my hands now. I have been in a trance for the last couple of days and everything, including this, seems surreal to me.

You have been a trending topic online for days now. What has it been like for you on social media after something like this?

Frankly, I'm horrified. People have been creating fake profiles with my name on Facebook, Instagram and Twitter. I'm not even registered on Twitter but people keep asking me if I have tweeted about things that I have never heard about. My work for the past few days has been to report them, but they just keep popping up. There's also fake news about me spreading all over social media. Just today I read something about 'Sheril coming to Tamil Nadu'. I want to make it clear that none of this is me. I have never made any comments about any issues over social media and do not plan on doing it. 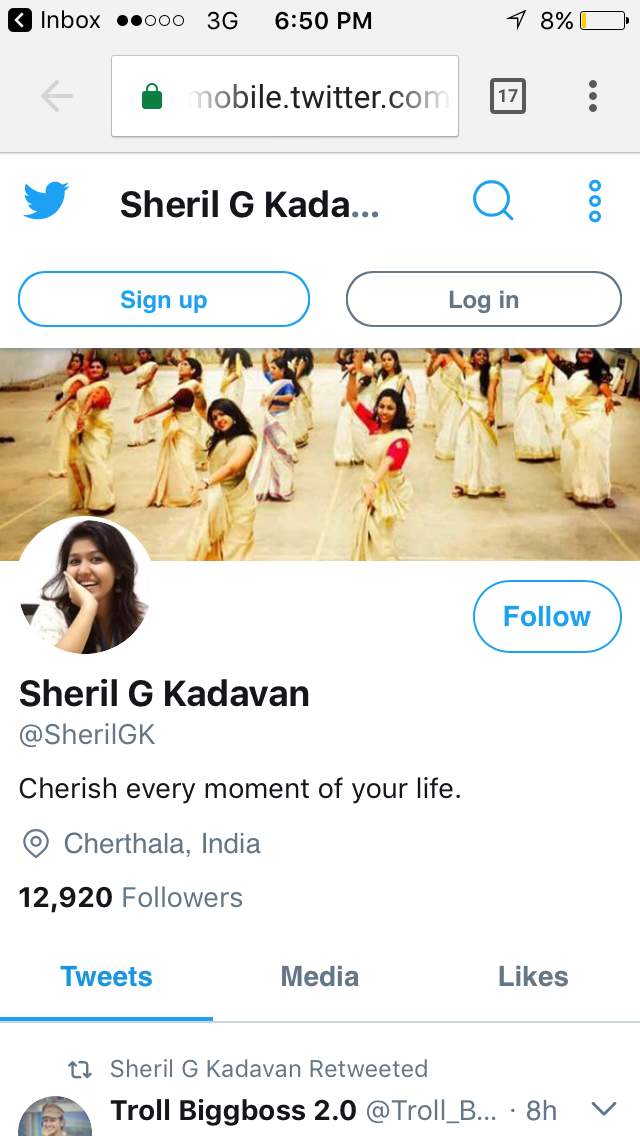 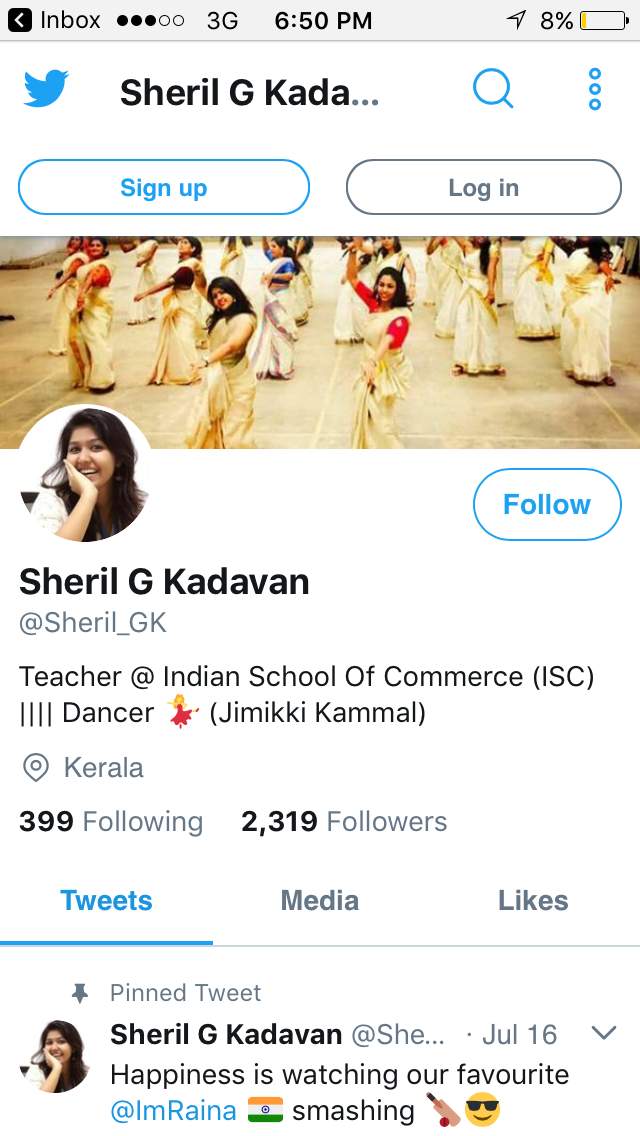 Fake as frack: The number of fake accounts in her name have horrified her

Are you scared that this will affect your relationship with your students?

Not at all. The flash mob was originally organised as a way to strengthen our bond with the students. I hope that all this attention can somehow benefit them. What we did was fun and I hope it entertained people for some time. But it must never divert focus from the stories of students like Anitha. Those are conversations that must not be interrupted at any cost.

When did you first find out that the dance had gone viral?

Two hours after we uploaded the video on YouTube, we saw the number of views multiply. It was crazy. I've always been on the other side of these things, so when I found out that we had crossed over 6 million views overnight, I got the feeling that this was not going to be any ordinary thing. 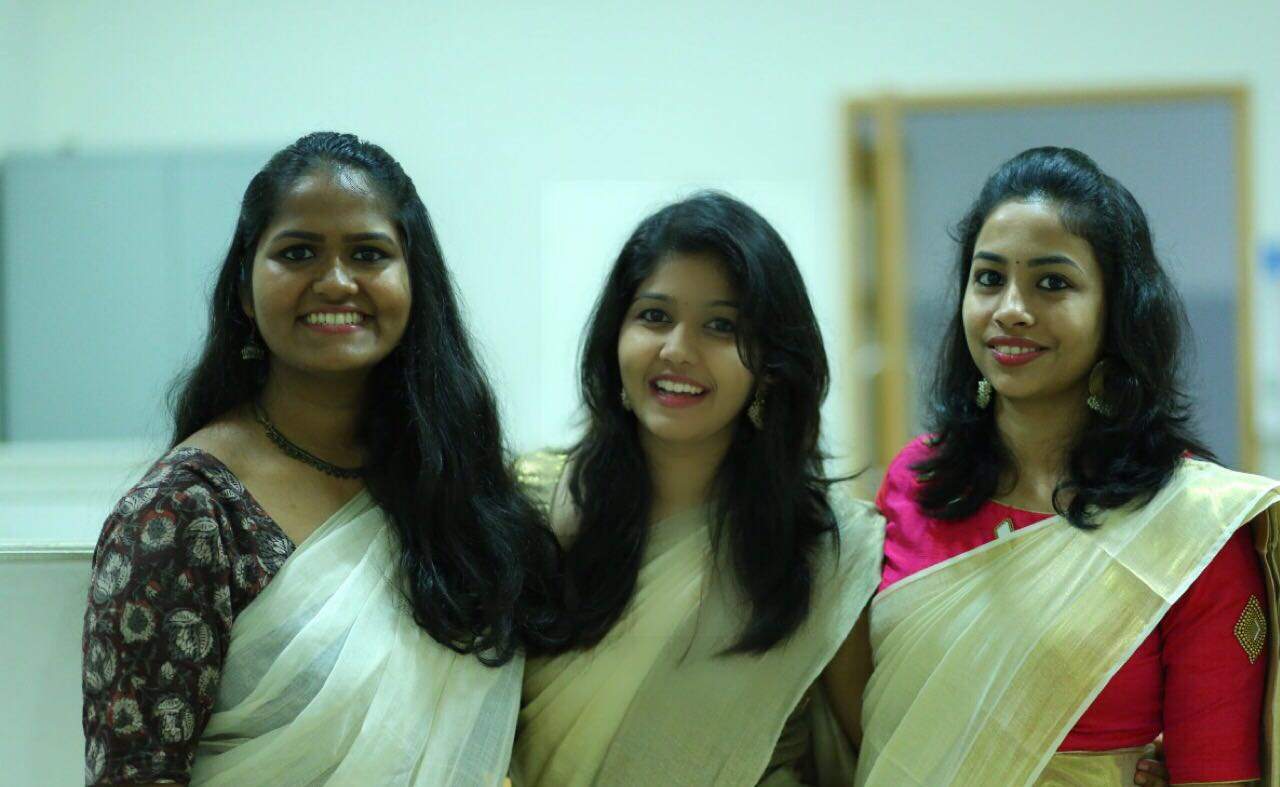 The Onam Tango: Sheril Kadavan with folks at her college

How have people reacted?

There has been a lot of love as well. So many people have been contacting me after the news got out. There are so many unread messages on my phone that I don't know if I can ever get through them! Yesterday, I found a page called 'Sheril's Army' on Facebook! (she chuckles) People's reactions have been so overwhelming and when it comes from a good place, it is the best part of this whole thing.

Do you think that Jimikki Kammal could change the direction of your life?

Right now, it feels like it has. This morning, the film choreographer Prasanna Master offered me a role in a Tamil film. I've also been offered roles in Malayalam. I am grateful and if something interesting comes along, I am definitely open to it...