The moment I was asked to write about my teacher my eyes were moist.

Though there were many teachers who moulded my life, and to whom I am eternally grateful, there are some who left an indelible mark.  Dr Nirmala Kesaree is certainly one of them.

After completing my MBBS at Bangalore Medical College, I joined JJM Medical College at Davanagere despite getting third rank for Bangalore University.  I did not get a government seat.
Sri Shamanur Shivashankarappa obliged my father the late Dr DG Benakappa by giving me an MD seat in his institute. The day I reported to her as a post graduate student in June 1983 she felt, I was not only meritorious but also influential.

So she decide to teach me a lesson. She was exceptionally strict with me, I remember her words even today. ”Just because you are a well known  paediatricians daughter, don’t assume that you know paediatrics”.  I was literally taken aback. 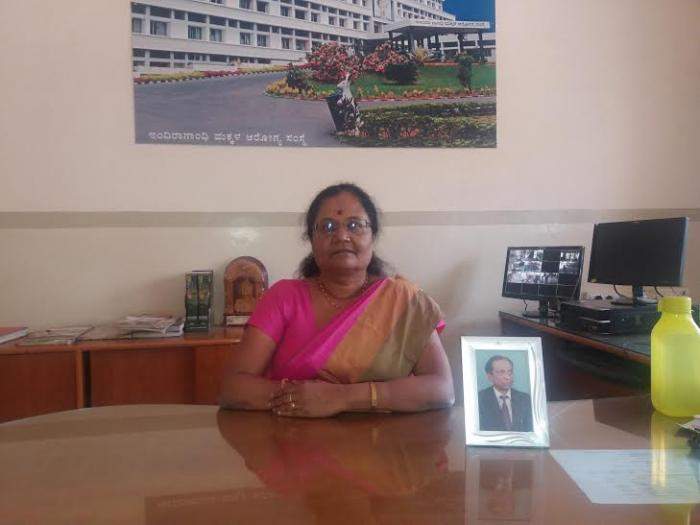 Mentor love: Dr Asha Benakappa says that it was her teacher's compassion that helped her sail through the course

At one end, I had to cope up with my immense disappointment of not getting an MD paediatrics seat in a government medical college, and on another, that my father had to struggle to ensure Shri Shamnur Shivashankarappa provided a seat in a private medical college.

Almost every day my father would meet  people in corridors of power  to  help his daughter get  a seat. It pained me no end to see the way he was struggling. I was too attached to my father whom I fondly called “Appaji”.

My teacher's strictness on my first visit made me literally run away. Appaji told me that I should not buckle down and to work very hard. Madam kesaree told me that I would not be given leaves too.  How to stay away from my Appaji for months together?  At that point of time my father was HOD and medical superintendent of Vani-Vilas Hospital. Despite that he promised to visit me as often as possible.

I was posted in her unit she ensured that I was punctual, worked in the wards, made notes and answer the questions shared as the previous day. At the end of 1 month she truly re-grated  for that “one month”.  As our relationship evolved, she told me that people had told her that I was too proud and should be taught a lesson.  Her lesson  to me was never listen to others and judge a person.

I follow that even to this day. Though she was the head of the department she would sit with post graduates  in the outpatient department and while seeing patients would explain the nuances of paediatric medicine.

Kesaree madam examining the child was worth emulating.  She would constantly smile speak gently to the child and her touch would Heal any illness. When the child was very sick we both would personally carry that child to ward number 58 (which was the emergency ward) at Chigateri General Hospital. There are several situations when we could not find a vein, to give the life saving medication. Madam would colmnly sit down,  shave the head of the child and start scalp vein infusion. This was a technique she only knew.

I am happy to state that I have learnt that life saving technique from her. She would make me sit with that child till the baby improved. If the child succumbed, her agony was palpable much more than that of the parents. She would touch the child's feet and asked for pardon I suppose. Sometimes she would touch the head and bless the child if child recovered.

She was more of a social  paediatrician with immense concern to the community and when immunization was not happening in the government sector, she would conduct outreach activities with her team. Money for her activities were never an issue

I was one of those trusted students who could freely draw the amount for the benefit of the patients. She would deposit all the honorarium she got to this account. I to do the same by using the honorarium I get to help poor patients she would ask me to deposit 1 hour a day and 5 to 10% of my extra earnings for the benefit of the poor those saved hours were used for community outreach activities she believed in.

Prevention is better than cure

Her love for children was so immense that, when I asked her why didn't you marry and have your own, to this she replied I loved a man who shunned me, after which I swore never to get married. Having her own children would make her love and concern for others children less was her firm belief. She believed promotion of breastfeeding with the right homemade nutritious food would go on a long way in preventing illness in children coupled with immunizations. This led to development of the nutritional rehabilitation centre in the Chigateri general hospital campus.

To get this unused place from the then medical superintendent was an herculean task. If my memory is right it was a defunct Postpartum block.  Ms. Saroja, a very committed person was made in charge of this unit.

I vividly remember that there was a reception area which also functioned as a preschool. In addition, Nutrition Museum, kitchen, kitchen garden etc were also present on the campus. There was big hall where children slept with their mothers on the mats.  Mothers were made to work in the kitchen, develop the kitchen garden, and help in the preparation of local nutritious food

They also had to look after their Children. They too had to participate in the informal education that was part of this centre. There was abundant play area. Her firm belief was staying together and eating together had a strong message to children. Today we call this concept as active feeding responsive feeding and adequate feeding. This centre was both residential for outstation children and day care for localites.  she would use the display in the nutrition Museum to display myths about food for children

She is the originator of the DAVANGERE MIX - A nutritional food, which children love. Her Emphasis for weight and height recording was immense (which we call anthropometric measurements), So that a child's weight and height loss can be picked up early and early intervention would prevent this child from illness because malnutrition leads to infection and infection leads to malnutrition which is a vicious cycle.  As is the teacher so is the student.

Nutrition is the solution

I too lay a lot of emphasis towards nutrition. she was an academician too and invented many simple tools-syringe method for retracted nipples, common salt therapy for umbilical granuloma etc.  She had formed an academic hub centre in our house (which was opposite to the hospital).

For a name it was called the Davangere paediatric research Association Where I learnt my first lesson on research and Publications.  Not every post graduate was taken as a member I was one of its privileged members. Slowly and steadily our relationship was more like a mother and daughter I started living in her house and had access to all her books and notes we would sit across the dining table and discuss till the wee hours of the morning she would gently nudge me to take up her concern for children.

Our relationship was for 9 months only. At the age of 55 years she left to America to pursue her DM paediatric neurology course. I was very disappointed and cried inconsolably but she firmly told me that she had nurtured me for the full term (nine months). While she move to the American shores, I painfully detached myself from her and pursued my 3rd year MD paediatrics and successfully completed it in June 1985. Till I lost her to alzeihmers in 2008. 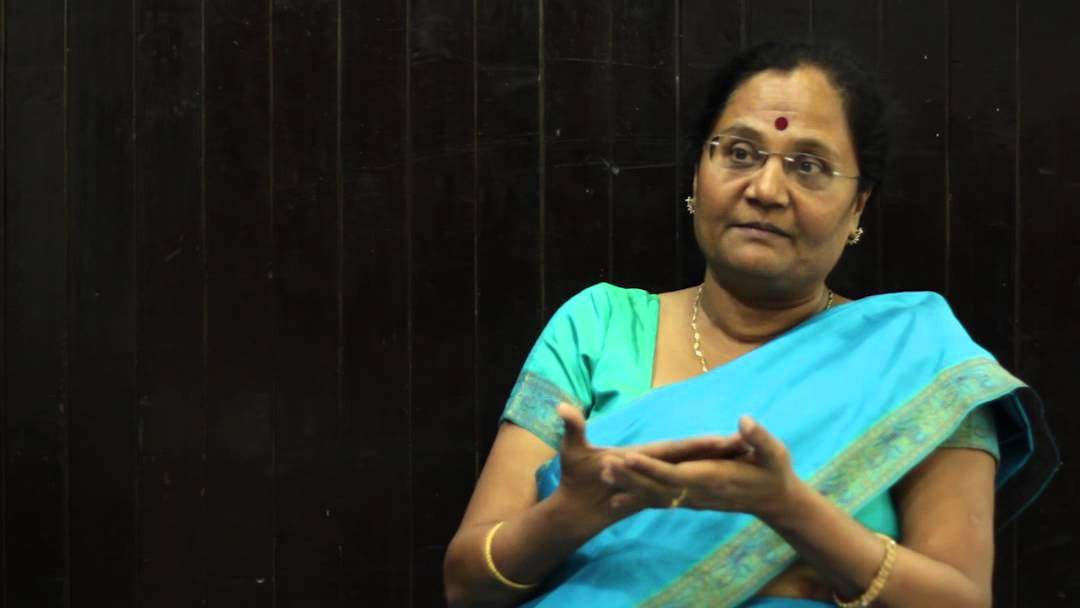 On time: Dr Asha talks about how puntual and strict her teacher was

We would talk to each other almost every night on the landline, travel together to conferences, scientific meets etc. The last time we were together was 2008 January when I took her along with me to receive the prestigious FIAP(fellow of the Indian Academy of Paediatrics).  I was the second women paediatrician to receive that award in the state and she was the first.

If patient care was a priority, her concern for students the future paediatricians of the country was immeasurable. She was punctual, strict and a disciplinarian when it came to patient care.  But embodiment of humanity when it was her needy students Spare the rod and don't spoil the student was her belief. Just like her teaching is a passion for me and students are my inspiration.

I have inculcated the values of both my teachers Simplicity, Humility and Humanity It's unfortunate that today students do not have such teachers who are becoming extinct. Today's  teachers do not understand the value of Guru Shishya PARAMPARA. These breeds are extinct.

I lost her on January 8th 2016 and my Appaji on September 27th 2016, both were doyens  of  Paediatrics.  In their death,  the paediatrics community of the state lost  the mother and father of paediatrics.

She would always tell me when you exult your students, they will take you along in their success. If you demean them they will bring you down at every opportunity. All through professional career I was suppressed humiliated many times and was prevented from achieving my goals and reaching the community.

One day she said remember this forever you are a precious diamond and will shine even when you are thrown into the dustbin. I wish she was alive to see me as the director of the largest Super Speciality children's hospital in the state. She too started the Bapuji child health Institute on the lines of IGICH but attempt to name that Institute after her Nirmala Kesari Institute of Child Health did not happen.  I have failed my teacher on this count.