For those who did not get the memo, robots are no longer merely the stuff of your weekend sci-fi entertainment. Self-driving cars and cyborgs in robotic suits that had hogged the headlines in the recent past are, in all likelihood, the harbingers of a time of friendly neighborhood robots. The threats of unemployment and a probable robotic apocalypse notwithstanding, most humans appear thrilled at the prospect of an unemotional entity waiting to take orders from them. So, it comes as no surprise that the fields of robotics and artificial intelligence are on the upswing.

India, as Silicon Valley would testify, was never hard pressed on engineering talent. But, rote learning and outdated syllabus that pervades the country's education system have clipped the wings of the dreams of many a budding engineer. The need to infuse creativity and imagination has become the need of the hour. Kochi-based DCS Robotics intends to do just that. "We started the academy to introduce young and motivated kids to robotics. It had two core and basic elements - one, impart technical skills to form an idea of how things work and secondly, bring out the creativity in them," says Lincy Jeksy, the founder of DCS. A school teacher at a city school, she left the job to concentrate on robotics and STEM (science, technology, engineering, and mathematics) learning through educational tools. "I learned during my days as a teacher of physics that lecturing theory is the last thing one should do to get the children hooked to the subject. Physics, being a subject with immense real world application and possibilities, is best taught through activities.

We started the academy to introduce young and motivated kids to robotics. It had two core and basic elements - one, impart technical skills to form an idea of how things work and secondly, bring out the creativity in them

"At the summer classes in DCS Robotics at Panampilly Nagar, a group of 5-6 students are busy with their educational kits. One of them was working on a grass cutter prototype, another was programming a light signal for Kochi metro trains and the most ambitious amongst the bunch was working on a robotic arm. All of them use Lego's EV3 Mindstorm kits to bring their ideas to fruition. "Each day we give them a task to make a robot/machine. Before they embark on it, we give them a short class on the major concepts they need to understand to make it happen," says Jeksy. 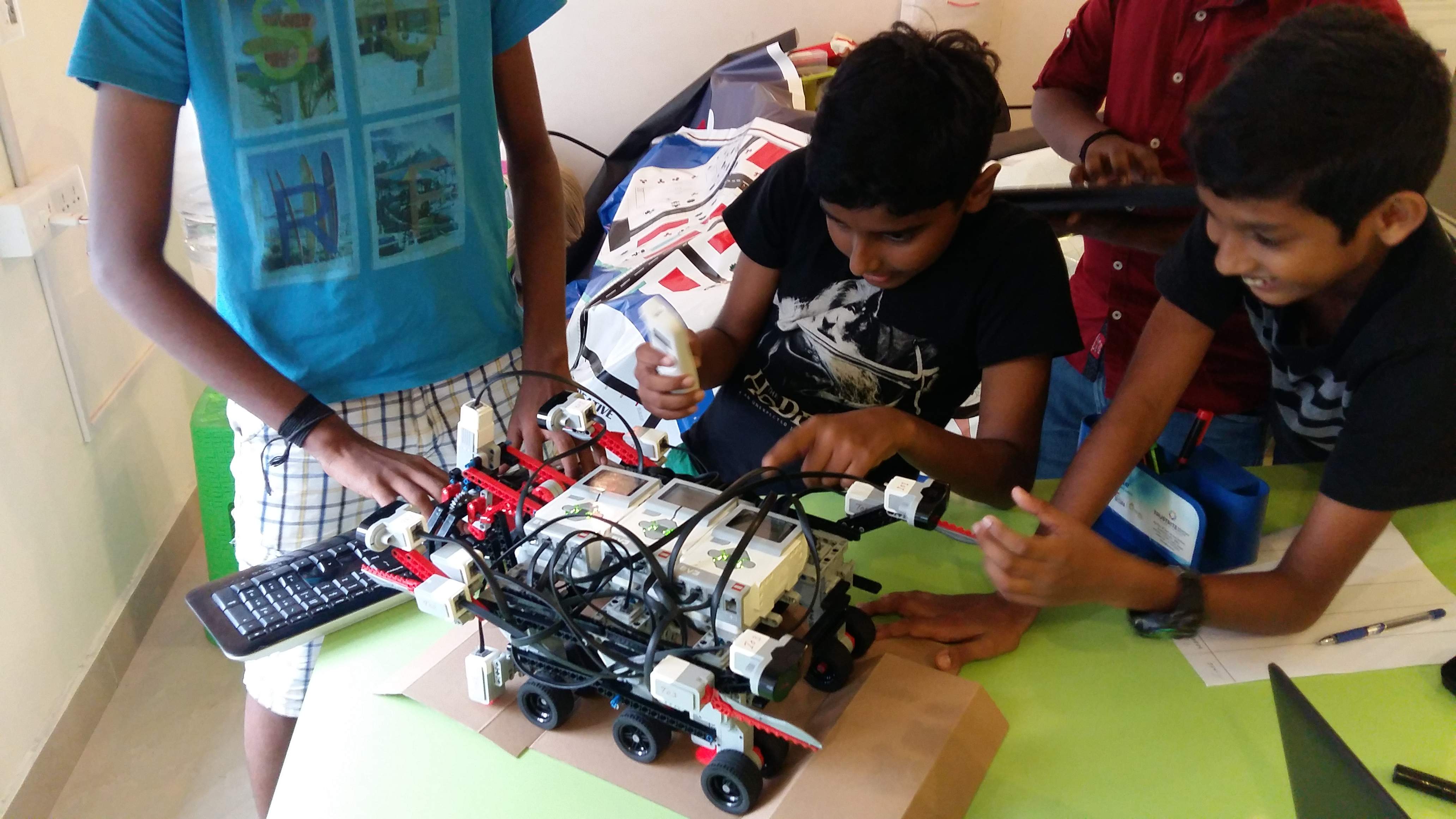 The children, Jeksy says, pick up the ideas faster and better with the tasks. As an example, she says the concept of displacement in physics, which is introduced to the students in their 7th or 8th standard, becomes easy for a third grader when it is demonstrated by way of the education kit. "Some of the students can pick up certain ideas faster than other students. From their interests and skills, we are able to determine the branch of engineering best suited for him/her."

The curriculum is prepared by Jeksy along with experts from the field of robotics, engineering and computer programming, which they revise constantly and in response to the talents of the students. "Idea, design, manufacturing and programming are the major topics taught initially. Then the students will learn about basics of the co-ordination of processors, motors that control motion, the sensors to identify the hurdles on the ways of robots." 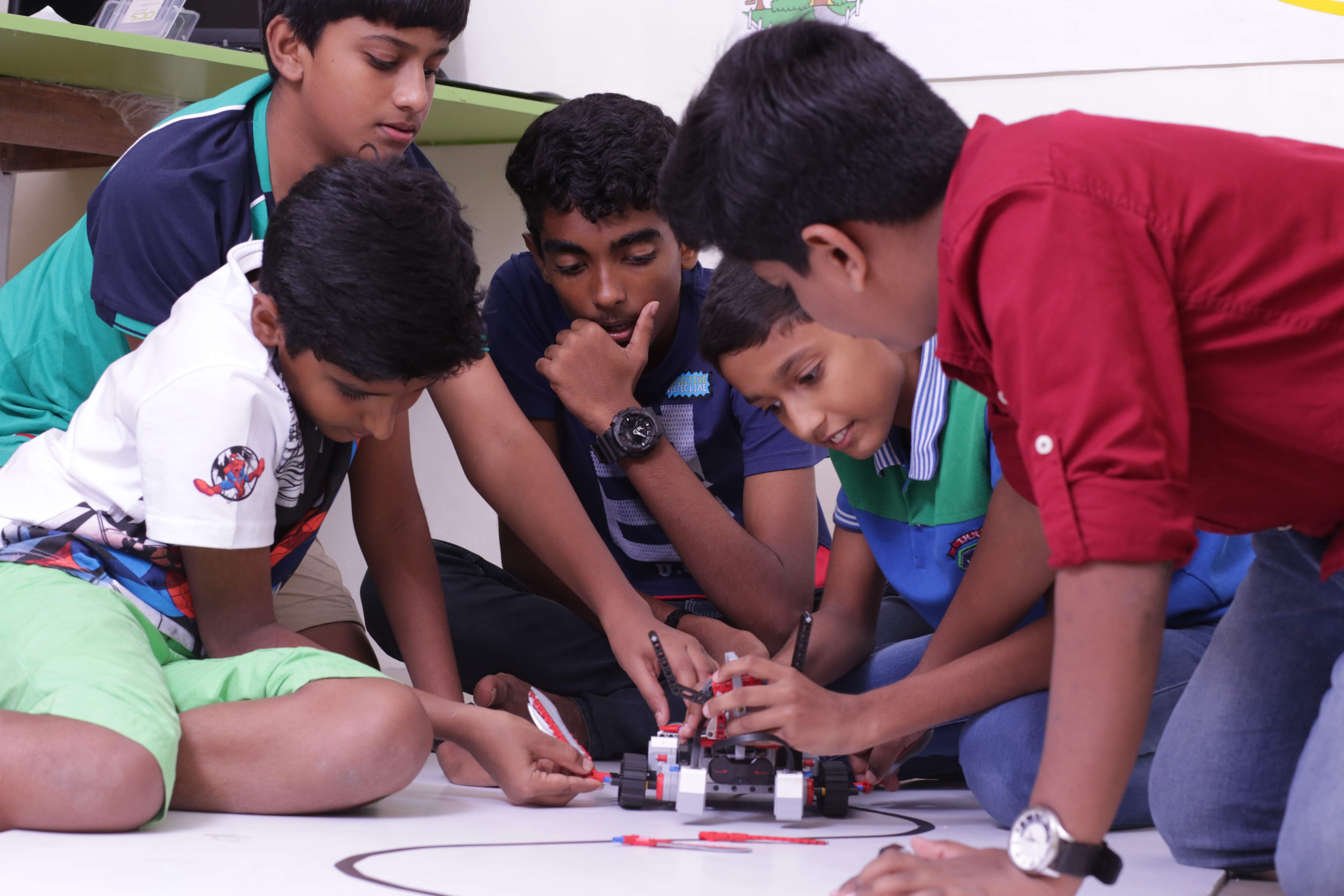 Together we stand: Students working together on the robots