Styled like old newspaper clippings, the posters put up by the Progressive Students' Forum is getting even apolitical students to come to their big meeting and debate all the fund cuts et al

The TATA Institute of Social Sciences (TISS) has never really been very political. Not like JNU, anyway. Heck, they don't even have a Student Union. Which could be why the students had formed a collective called the Progressive Students' Forum (PSF) and have chosen to take up their issues via satire - they've put up witty posters to catch the attention of students who want to avoid politics like the plague. And through these posters, they're drawing them to a public meeting on campus on Monday to discuss some things that they believe are wrong with the system.

Hello Mantri-ji? Not so cool

Sample this poster. It goes the "Keep Calm" way but by invoking a Mister Gogo, urging students to Keep Calm and Raise their voice against the various injustices meted out to them and the Higher Education system at large. These issues include the cutting off of scholarships for the SC, ST and OBC students, fund cuts to higher education, the NET-JRF exams being held only once a year and the merging of AICTE and UGC merging together and becoming HEERA! 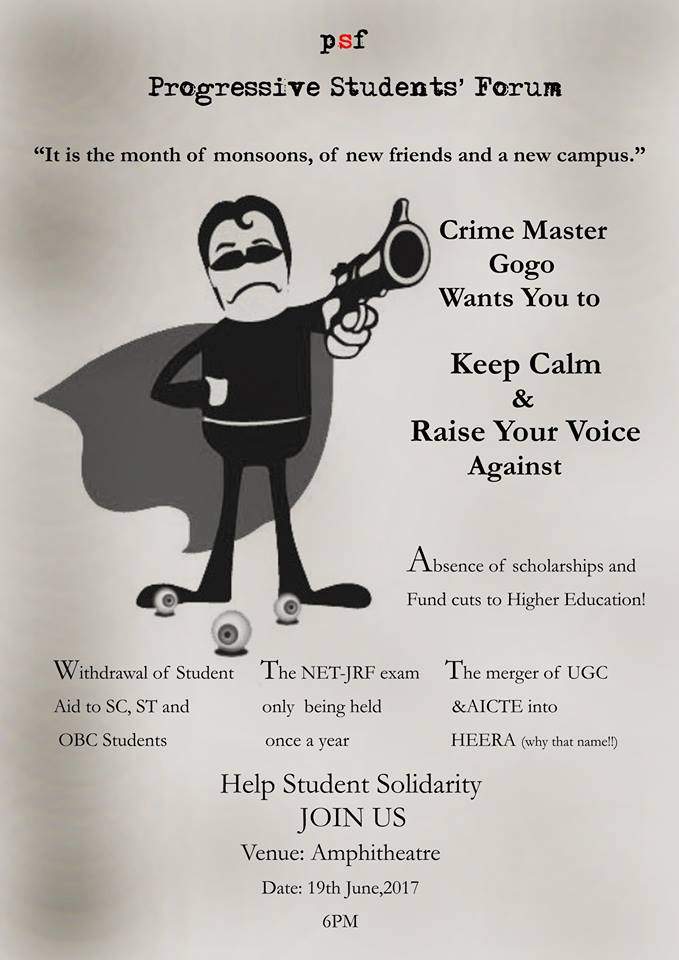 Funny Much: The posters are trippy, sarcastic and full of life

Rousing the rabble in style

But why? Why not just stage a protest like every other university? "We are a relatively small institute in comparison to others and not very political too. We've also not had any major issues till now, but we wanted to ensure that we have enough students who would support us this time. So we wanted to attract some attention before our meeting, and we put out these posters. We not only wanted to attract the students who are political but also those who are absolutely non-political," said a member of the PSF.

He said that the PSF wanted to get most students on the same page, "These are issues that affect our everyday life, so students don't have to be partisan to support the cause. We wanted to associate with such students better, so we thought pop culture would be the best way to do it," the PSF member said. The posters don't scream colour or big graphics. They're just incredibly witty, "The template is that of a newspaper, we wanted something unusual and eye-catching, so we decided to make it in a newspaper style," said the member.

The TISS guide to Daily Economics

With the contentious issue of fund and scholarship cuts, their second poster listed out things that you could get for Rs 10, Rs 50 and for zilch. Hilarious, right? "We want to introduce students to these fund cuts and scholarship withdrawals. Our main objective is, of course, the recent scholarship withdrawal for SC, ST, OBC students. We live in Mumbai, the expenses are so high that's why we thought we would do a hilarious take on things that are available to eat under ten rupees," he explained. With a sketch of a samosa, a chai and a cigarette balancing on its edges, this poster lists the cheapest food and places that they are available at. From Maggie at Simple to Mosambi juice at Siddhivinayak and also a section on all the places they can't go to because it has suddenly become costlier and they rightly call this section the "heartbreaks"! 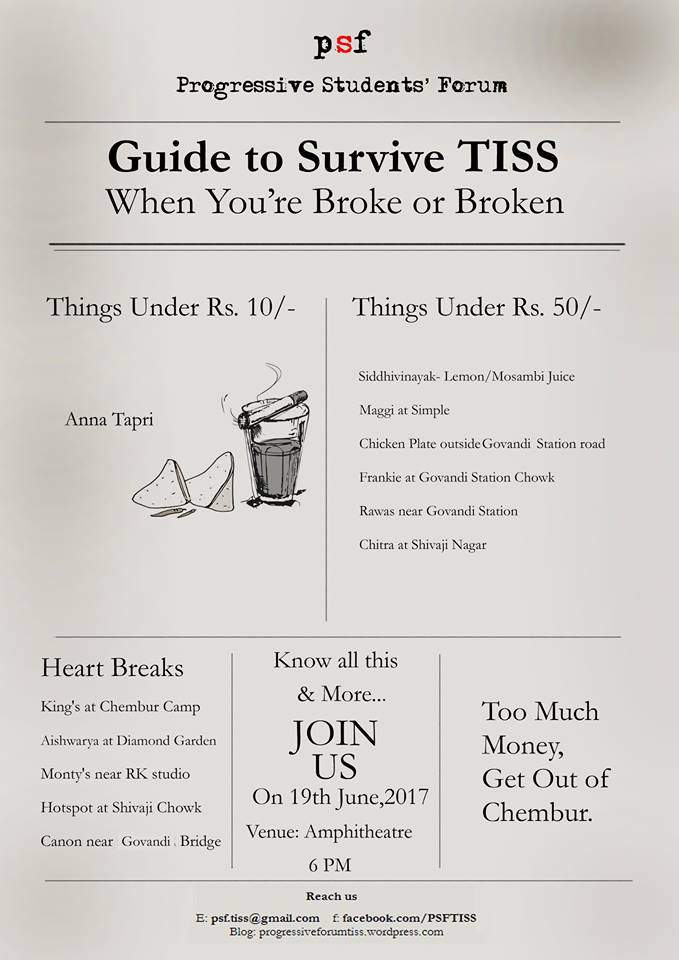 Food for taught: How much can you do for dus rupaiya?

All these posters invite students to 'Know more and join them', to participate in the decision making of their own institute and to address the unfair attitudes that have developed against the minorities. "We have gotten a lot more responses on these posters then we usually do for our other work. So we are hoping lots of students come for the meeting on Monday," he added. The PSF tried to do something similar last year but it didn't quite work out, "They also weren't as good as the posters we have this time. So we hope this time it does the needful," a senior member of the forum said.

The institute had issued a statement three weeks ago, that they would be cutting scholarships because the government had failed to send funds, putting the college in debt. SC, ST and OBC students were forced to gather their fees in just two weeks and all the students were expected to pay all their fees upfront including, hostel, food and other expenses, sending the students into panic mode.

Now, that the panic mode is off, students are switching on their wittiness but they want to ensure it's for the greater cause.