Getting their act straight: These five theatre groups discuss their journey, the work and the importance of  the art

Theatres are a serious business, especially if you’re young and you know how to wow a corporate or two. Take a leaf out of these South Indian theatre groups pages

For the longest of time, plays have attracted elite citizenry, pressed and dressed in their finest. It has always been perceived as a career option for those who are the ‘hippy-artsy’ type, who don’t mind earning peanuts for the sake of art. In some ways this still holds true, but one can’t ignore the fact that a number of youngsters are choosing to become theatre artistes and what is even more outstanding is that many are choosing to set-up their own theatre companies. But how do they manage to fund their companies? Well, today, these actors are paid, plays are sponsored and tickets are sold out like hot cakes. This is because theatre company founders have figured out how to market their productions — understanding their audience and giving them what they want. Several companies are also branching out into the digital medium — from web series to comedy sketches, trying to ensure that they continue to have a strong foothold in the industry. They may still face issues with funding and organisation, but these theatre companies are here to stay, and they are inspiring others to join them on stage as well. We caught up with five theatre company founders in the South to find out what motivated them to set up and how they manage to keep the curtains up! 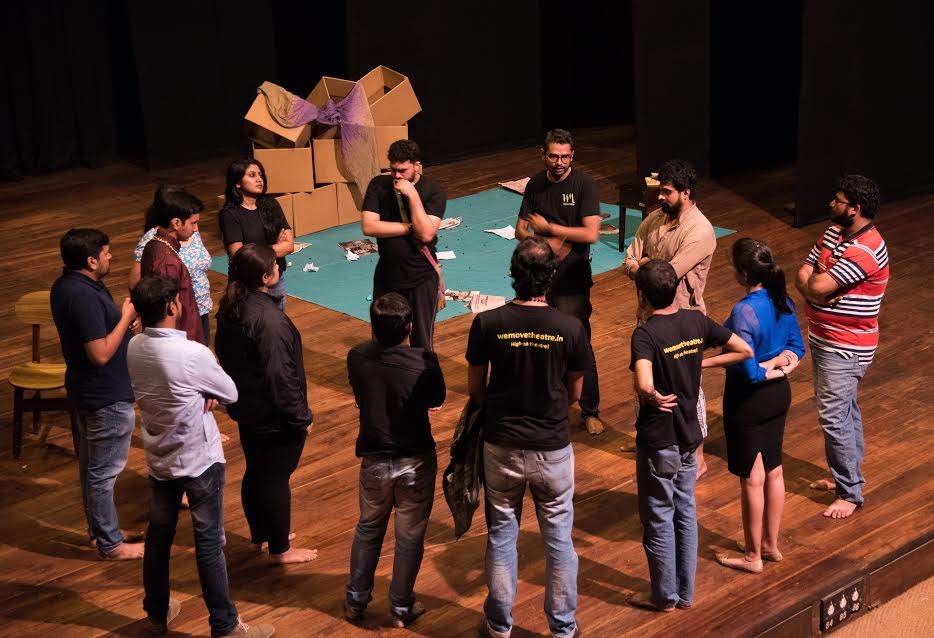 WeMove Theatre, a Bengaluru-based theatre company, was founded by Abhishek Iyengar and Rangaraj Bhatracharya in 2006. It provides a platform for individuals who want to express themselves through the medium of theatre. "When we started out, we just wanted to create a free and open platform where common stories connect people. We felt like there was a need for a stage where anyone who has a passion for the art can perform," explains Abhishek, who established the theatre on the ‘theatre for all’ policy. Explaining this further, he says, "It refers to the idea of performing stories that the audience can relate to and the fact that anyone who has a story to tell can perform."

Producing one major production a year, their plays like Magadi Days, E=mc2 and Anavarana are still being performed till date. Overall, they have performed over 170 shows in Kannada and English. "We try to keep our themes as contemporary as possible. Today's facts will become tomorrow's history and we are trying to make sure that we reflect the truth of our time if someone looks back on it," says Abhishek. WeMove Theatre specialises in a variety of live performances, including performances for organisations and corporates, and entertainment through theatre. The theatre group also conducts theatre workshops that are aimed at behavioural and soft-skill development of an individual. The workshops are of two types — the Big Step, a one-day workshop and the Big Step Intensive, a ten-week-long workshop. 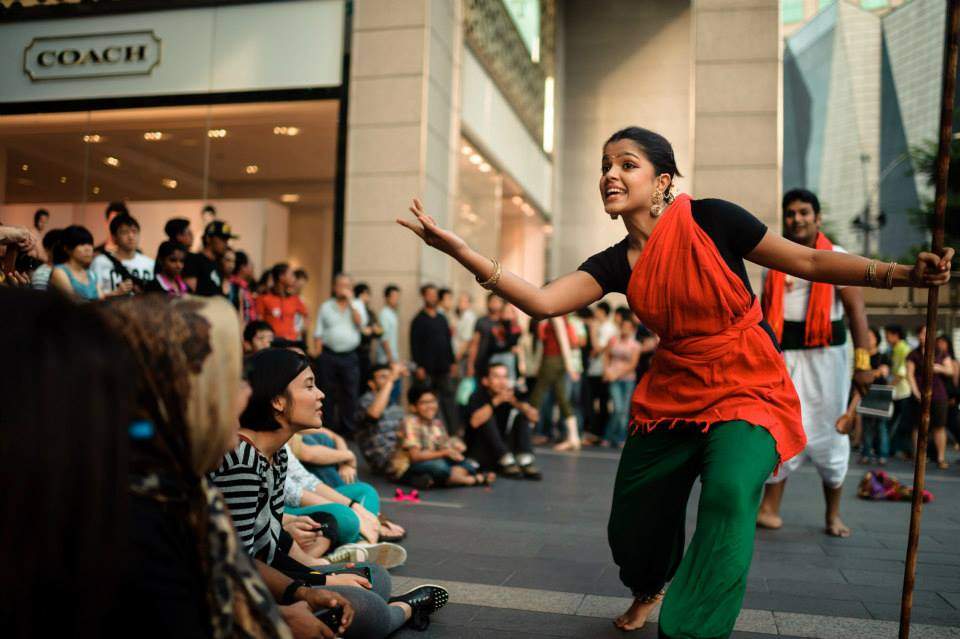 In Action: One of the artists from Stray Factory

Just like most theatre companies, Stray Factory too was started by a bunch of youngsters who got together to do what they love. Frequent collaborations for theatre festivals like the Short + Sweet Theatre Festival, brought together Mathivanan Rajendran, Pooja Devariya, Venkatesh Harinathan and others, to form Stray Factory. Talking about the company’s primary aim, Mathivanan says that the aim has been to get smaller theatre groups and local artists to work with them, and also for their work to be more rooted, traditionally. "We did a workshop with Adishakti on how to become more rooted in our scripts and performances. We then started to work primarily for Short + Sweet, winning local and even international competitions," he says.

Speaking about the establishment, Mathivanan says that they have certainly faced challenges especially with respect to functionality and creativity, but they've managed well all these years. Another stand-out fact about Stray Factory is that they only produce original scripts and don't rely on script adaptations. One of their oldest productions, My Name is Cine-maa continues to be frequently performed in the city. "We test our plays here and then take it to other cities and countries. We have managed to stay stable in the field and many of our actors are doing well for themselves," he says. Stray Factory produced one of South India's first web series, Black Sheep and made a move to the digital space quite early on. 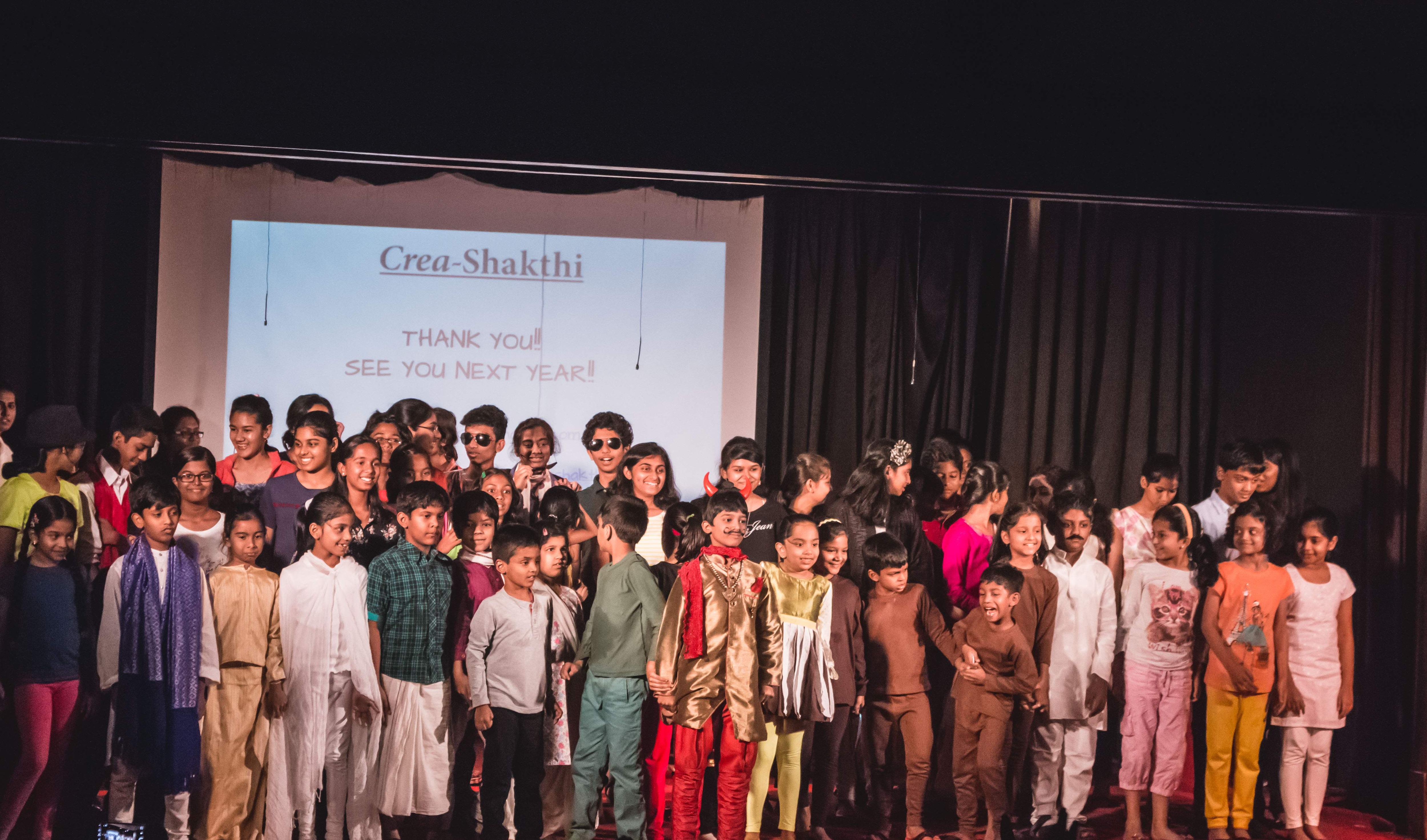 All Together: Young performers taking up the stage

Crea-Shakthi was set up in 2012 by seven friends who worked in the finance and commerce sectors but shared a deep love for theatre. With the aim to revive the theatre scene in Chennai, they involve and encourage young theatre groups, especially college-based ones. Within their first two years, Crea-Shakthi managed to make a mark for themselves and have now evolved into various departments — a theatre production company, international-standard theatre training centres, theatre-based learning solutions and consultancy that are provided to schools, colleges and corporates. Crea-Shakthi is also the curator of the largest youth theatre festival in the country and they manage a stand-up comedy wing as well.

The company's USP is its collaboration with college theatre groups and helping them in their productions, whilst also organising theatre festivals for them to participate in. Colleges like MCC, WCC, SRM, Ethiraj, SNN and SVCE have collaborated with Crea-Shakthi and their theatre festival, My Theatre Festival continues to attract participants from across the city. The company also works closely with the education sector to ensure that theatre is easily accessible to school children. Some of their most memorable performances have been Agatha Christie's Murder on the Nile and The President is Coming. The company also frequently participates in the Short + Sweet Theatre Festival. Crea-Shakthi's drama school is also affiliated to the Trinity Guildhall of Speech, Drama and Communication, UK since 2015. 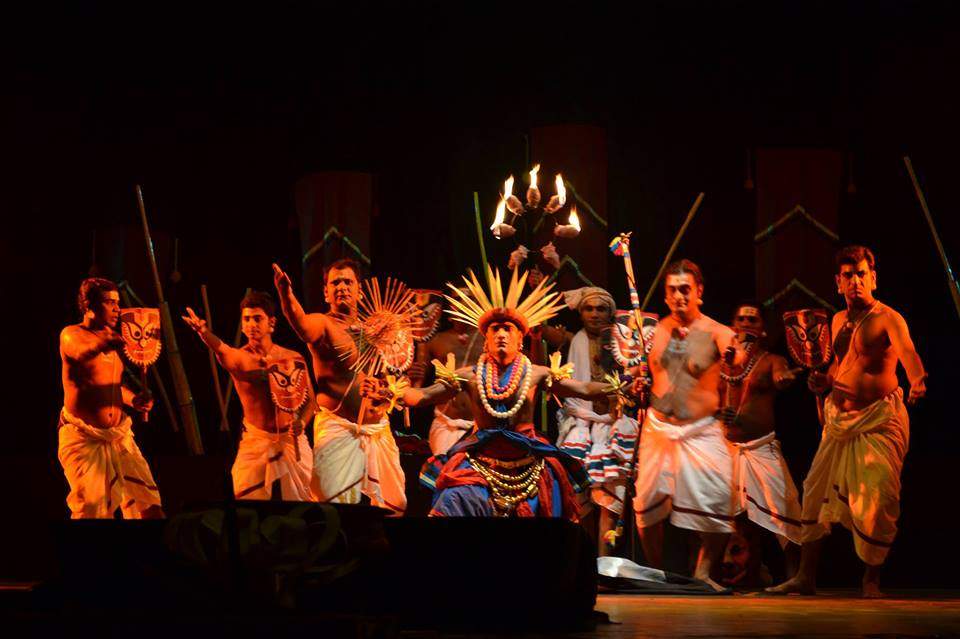 On Fire: Lokadharmi during one of their fiery acts

The Lokadharmi Theatre was established in Kochi in 1991 by a group of like-minded people who shared nothing more than a love for theatre. “Politics and culture were bubbling in Kerala at the time and people who wanted to do theatre came from all possible backgrounds,” explains Chandradasan, founder and creative director of the company that is affiliated to the Kerala Sangeetha Nataka Akademy and the Indian Council for Cultural Relations. The company performs over 25-35 productions every year with an ever-widening array of permanent and guest cast. Having directed more than 35 plays in Indian and foreign languages, Chandradasan and his team have performed their award-winning Karnabharam about 325 times in venues across the country.

In 2000, the theatre group performed Medea, a play written by Euripides in Greece. A major difficulty for the company has been to find a performance space, says Chandradasan, “We’ve had to perform in rented spaces. Not long ago, I sold a bit of my own land and bought 26 cents of land to use as a proper performing stage, so that we can have more creative freedom.” Currently, Lokadharmi organises training programmes and workshops in association with international artists. More than 60-70 people participate during the summer holidays and about 25 permanent students enrol on a weekly basis. The theatre also organises Mazhavilla which is a theatre programme for children that runs productions of their own. We wonder if theatre still draws the same love it did when he first started out, to which Chandradasan replies with a big smile, “Of course! Good theatre invites good audiences.” 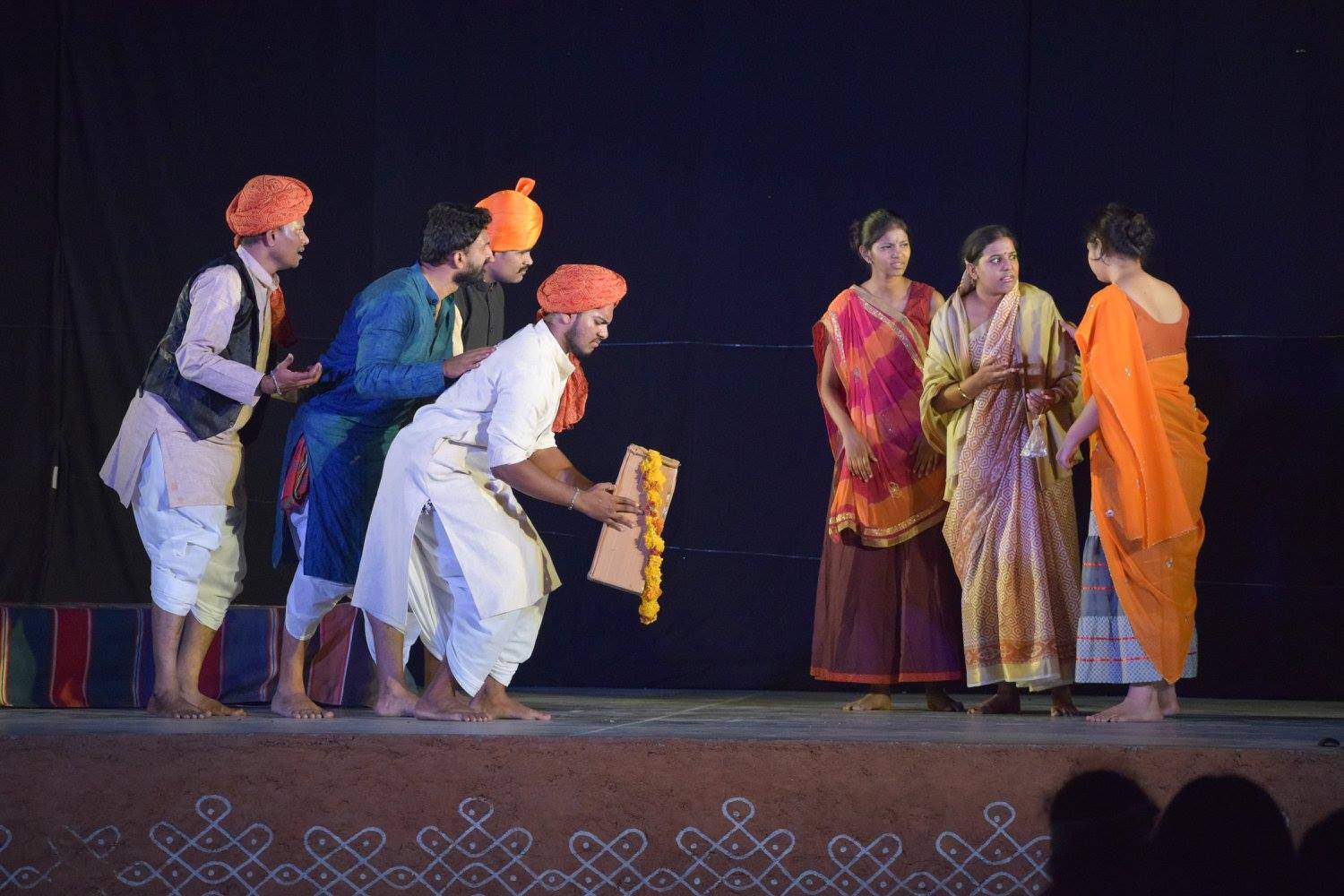 On Stage: Samahaara theatre performing one of their plays

Rathan Shekar Reddy was just another MBA graduate before he decided to quit his job and make his love for the stage his ultimate career, at a time when no one in Hyderabad could even fathom such a thing. In 2008, Reddy set up Samahaara, one of Hyderabad's first theatre companies that went on to revolutionise the theatre scene in the city and continues to do so even today. Samahaara not only performs throughout the year, but they also conduct theatre workshops. Between 2009-2012, Samahaara conducted the Hyderabad Theatre Festival.

"We wanted to encourage local theatre groups and promote their work. We invested in big auditoriums and arranged for good quality light and sound. The festival was highly successful with audience steadily increasing over the years,” says Reddy. However, Reddy states that one of the downsides of theatre in Hyderabad is the lack of infrastructure. Also, very few people still confidently invest in theatre companies, so it continues to be a tough business. But there is progress, Reddy adds. "Since the IT boom, a lot more people have been attending plays especially on the weekends, so we have full houses. More people choose to follow alternate careers or they at least want to participate in these workshops," he explains.