Like a candle in the wind, Kerala's Ambily Fathima underwent a heart transplant after people from across the world crowd-funded her surgery, only to succumb to illness. Read her astonishing story

We've got the perfect heart for you, said the voice on the other end of the line. Those words, spoken on a Wednesday night will continue to ring in Ambily Fathima's ears forever, for it was in that little moment, when a flicker of hope swelled within her. She knew life would never be the same, it would change. But, for the better. A few months before that day, she would have never hoped to see this happening. She was diagnosed with Primary Pulmonary Hypertension, a rare condition that causes stiffening of arteries, leading to difficulty in supply of blood to the lungs.

But her painful journey began much earlier. At the age of two, Ambily was diagnosed with a hole in her heart. She had trouble walking long distances and climbing stairs. Any physical activity would cause her to faint. "I was not aware of my health conditions. My parents use to take me to the hospital pretending that they were sick themselves and needed to consult with the doctors. But after a point, I realised it was me who was sick. Whenever I overheard the doctors telling my parents about my health, I would remember each word they exchanged and search for information online. They realised I knew about it soon enough and started discussing with me. I was a bit stressed. But I was also determined to find a cure, so I started researching my condition" 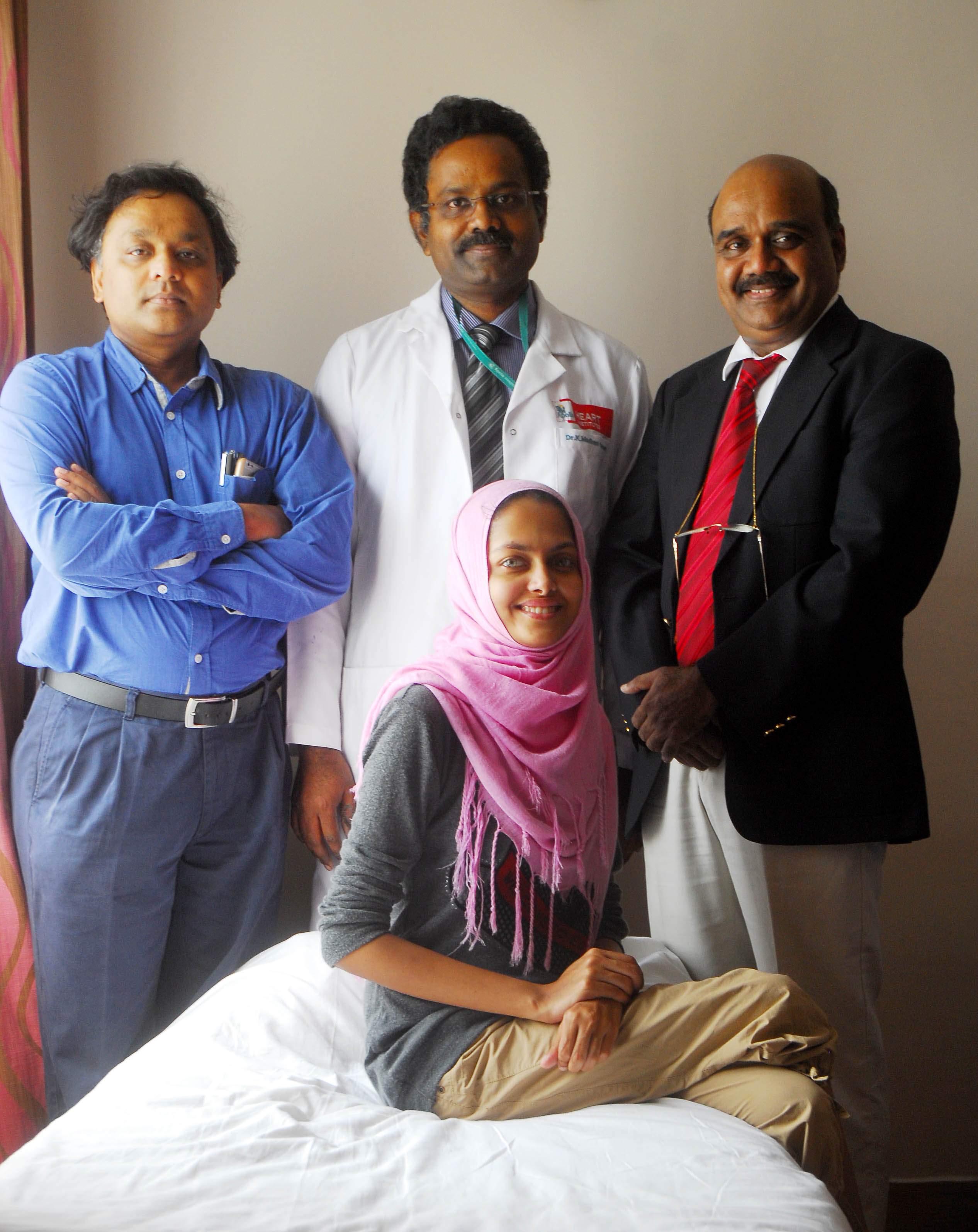 Band of docs: Ambily surrounded by the three surgeons who managed her transplant | R Satish Babu

And determined she was. “One day, she just woke up, got dressed and told us she was going to meet a friend at a local newspaper building.  When she narrated her situation, her friend suggested crowd-funding and also published her story immediately. "We didn’t know about its potential until then,” says her father, Basheer Hasan. The news went viral. Soon, hundreds of people all over the world started donating and over Rs 65 lakh was generated towards her surgery.”

Contrary to what someone with Ambily's condition would have to go through at school and college, Ambily, an MCom graduate from CMS College, Kottayam says "My school and college days were the best part of my life. In school, no one even knew I had a health condition. I tried to blend in and be normal. Even the teachers didn't know I was ill. I had 100 per cent attendance in school. My studies were not affected. Even in college, I had the best friends and teachers. They were always behind my back. They are the only reason I completed my studies. I never had to feel like a patient,” she says with a heart full of gratitude. “Ambily has always been a pleasant and hard working child. But what stood out about her is her positive attitude. She faced every problem with a smile. I have taught her for five years and I’ve seen how active she is in combating social issues. Every time, there is an issue in college, or between friends, she steps in and tries to resolve it. Always the peace maker,”  Tomy Mathew, Professor at CMS College fondly recalls. 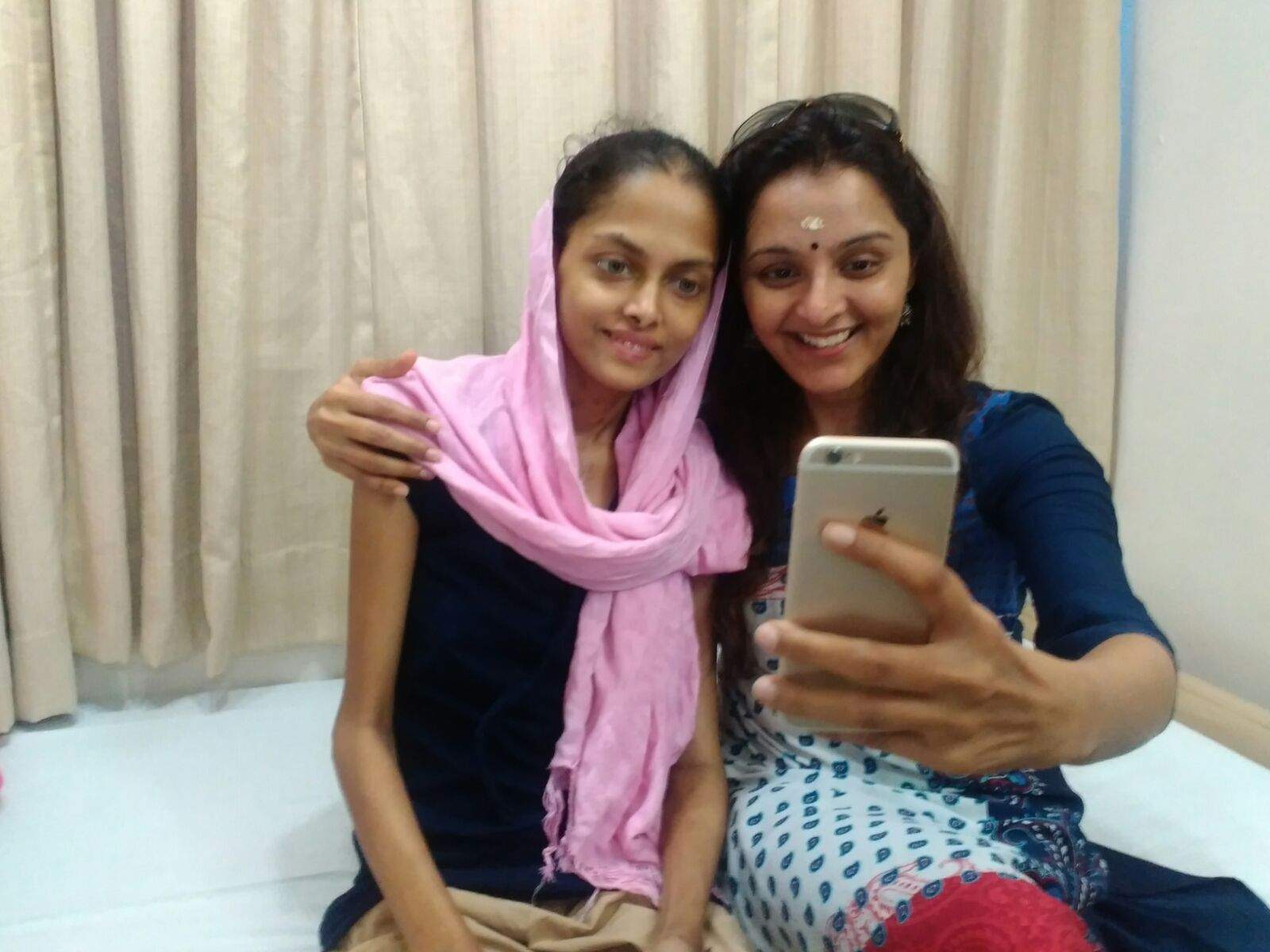 Selfie swag: During her recovery, actor Manju Warrier dropped in to visit

Ambily's passion for life is reflected on her hobbies as well. “She loves travelling and dreams of visiting new places. While she was still in college, she was selected by the Kerala government to be a trainer as part of ASAP (Additional Skill Acquisition Programme). One day, she traveled to Bangalore without telling us, because she knew we would get worried and wouldn’t allow her,” adds Basheer, with a laugh.

Beating all odds, Ambily has still not lost her positive outlook towards life. Now her life's mission is to help other people in need. She says she has a whole new life ahead of her and aims to become an IAS officer. "I am not from a financially sound family and my parents health is also not good. My parents have utilised all they have for my treatment, we don't even have a house now. I need to get a job so I can take care of my parents. My aim is to be a civil servant and for that I need to clear the IAS exam. You need power to make any difference in this country and that’s why I want to be in a position of power.”

With all that determination, Ambily started preparing for recovery. After a lot of consulting, she found out that Apollo Hospital in Chennai had the maximum number of successful transplants in India. On May 29, her parents brought her to Appollo, where she was diagnosed with Primary Pulmonary Hypertension. On August 13, World Donor’s Day,  she received a heart and lungs from a 23-year-old boy whose details remain anonymous. Three months later, Ambily feels she has had a second birth. “I wish I could know the person who gave his life for me. I always pray for him,” she adds. “We read in fairy tales how princes give their lives for the princesses. For us, the donor was her prince,” says Basheer.

For the three doctors (T Sundar, Paul Ramesh and Madhan Kumar) who performed the 13-hour-long surgery on Ambily, she will always be a special patient. “Ambily is a very positive girl and that played a huge role in her recovery. She has remained motivated throughout,” says Sundar

It is often heard that people who have experienced suffering are the ones who understand others sufferings. Nothing could be more true in Ambily’s case. “I want to help people who are suffering like me. There are a lot of young people with this condition and they are not aware of the treatments available. Even if they do, they are afraid of the consequences. I want to be a mental support and guide them and also help them financially if I can. I want to form a trust for charitable activities. I am determined and clear about my vision. But first I need to be patient and wait till I have recovered completely.When I take the pledge 'All Indians are my brothers and sisters', I know I have to help them like family. People spend a lot for their luxury, not for their needs. I don't want to be like that. I don't want another Ambily Fathima struggling like me,” she says.

Update: After years of treatment and monetary support from well-wishers across the country, Ambily Fathima passed away on April 25 last year. But her story continues to inspire people like her