At seven, this second grader from an Odisha village fought off a crocodile that attacked her friend using pots and pans

Pinki Dalei, who studies in second standard, is in line for a National Bravery Award for her act of sheer courage in fighting off a crocodile that was larger than both the little girls

This brave seven-year-old child from Odisha's Bankula Village has done something that even Tarzan would have been proud of. Second grader Pinki Dalei fought a crocodile off to save her friend from being attacked when they were washing utensils in the pond.

Accolades have been pouring in for the girl, whose village is under Dangamala gram panchayat within the Bhitarkanika National Park. Collector Muralidhar Mallick met the girl, Pinki Dalei, who saved her friend, Basanti Dalei. He will recommend her name to the State Government for the National and State Bravery Awards, Mallick said.  The Collector also gave her Rs 2,000 for her act of bravery.

Pinki and Basanti were washing utensils in a pond at Bankuala village on Tuesday afternoon when a crocodile appeared from the waters and caught hold of Basanti’s leg. Pinki displayed immense courage to save her friend. She hit the crocodile with utensils and drove the reptile away. The reptile attack left Basanti with injuries on her legs and hands. She has been taken to the Rajnagar Community Health Centre (CHC) where they said she was out of danger. The two girls study in Class 2 of Jayadurga Primary School in Bankula. Headmistress of the school, Kumudini Behera said the little girl would be felicitated for her courageous act. 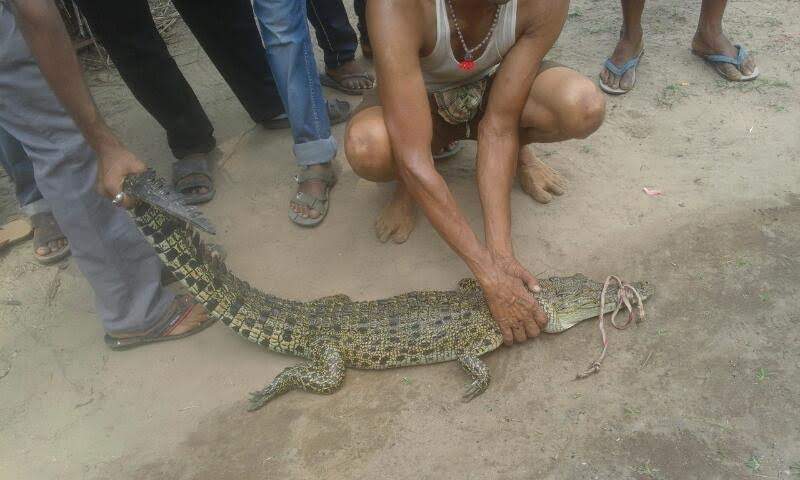 Croc Attack: The crocodile was captured by forest department officials

Forest officials of Bhitarkanika National Park, on the other hand, caught the five-feet-long crocodile from the pond on Wednesday. The reptile had strayed into the pond recently from the Patasala River within the park limits. Later in the day, the crocodile was released into the river. Forest officials also met the two girls and praised Pinki for the act.