Crestfallen over reports that the poor had to carry their ill and dead relatives on their shoulders, the Hyderabadi mechanic designed a bike ambulance that has all facilities of a regular ambulance

With their ability to reach far-flung areas and zip past traffic during medical emergencies, bike ambulances have become the new buzz word in the pharma and medical sector. In the last couple of years, several state governments too have launched bike ambulances amid much pomp, show and photo-ops. For 43-year-old Mohammed Shahzore Khan, however, it was neither the allure of publicity, not the attraction of money that made him create a customised bike ambulance. Reading about several incidents in which poor people had to carry their loved ones in their arms to the hospital or ferry their dead bodies over their shoulder for kilometres for the want of an ambulance that they could not afford, the anguished Hyderabadi mechanic felt it was time for him to do his bit for the society.

A proprietor of Deccan Motorcycle and Scooter Garage at Nampally, Khan’s love for bikes dates back to his teens when he would see his father work at the workshop. Deccan Motors specialises in customising two, three and four-wheeler for physically disabled. "The 20 years of experience I have had working here helped me and in 35 days the first model of the bike ambulance was ready. My team of 10 workers and my wife also helped me,” says Khan. 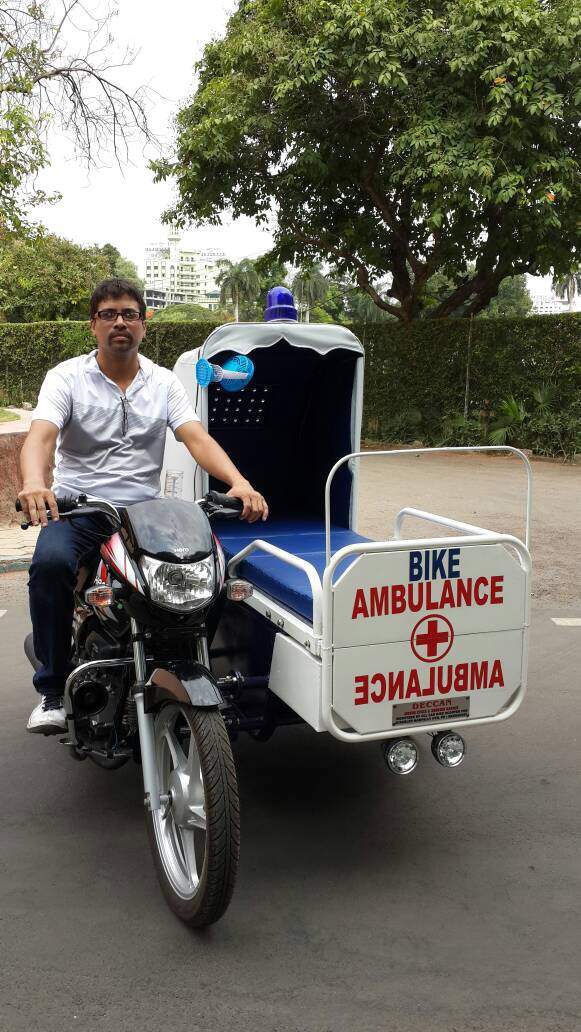 Designed by him, the original blueprint underwent several trials and tests before it got a green signal from Khan himself. The Sholay-styled bike ambulance is equipped with all facilities in a contemporary ambulance. “It has been designed to incorporate all facilities like an invertor, medicines, fan and oxygen cylinder,” says Khan. The sidecar is equipped with a bed with overhead cover to provide shade to the patient who can comfortably lie or sit. Below the bed is a foldable stretcher can be easily detached and attached. Between the bike and the sidecar, a stand for oxygen cylinder and IV is also provided. "The idea was to create something that could aid the ailing in rural and remote areas, where accessibility and affordability of ambulances are issues. Unlike regular ambulance that can not venture inside narrow lanes, densely populated area and often gets stuck in traffic jams, these bike ambulances can zip through the traffic saving precious time,” Khan tells Edex.

Attached to a Hero HF Deluxe bike, the cost of the sidecar alone is Rs 55,000. But since Khan’s target is to spread his invention in rural areas, he is trying to make it more affordable.
Soon after completion of the bike ambulance, a word spread and Khan started getting offers for his creation. “I am not ready to sell it off yet. At the moment the priority is to get a government clearance which is already underway. I am also reworking on the ways we can reduce the costs to make it more viable for those who plight pushed me to create this bike ambulance,” he said. Khan’s wife Zeenat Khan who handles the administration and marketing of the workshop is hopeful that once they get the necessary government clearance, they will be able to rope in smaller hospitals in the city and those in the rural areas too.