Oorna Permaculture Farm sticks to sense and sustainability while conducting workshops that bring you closer to nature. Meet the 30-year-old Hyderabadi artist behind it

Would you like to visit a farm? Oorna Permaculture Farm is different though. They have cobbed and poured walls plus they follow the principles of permaculture. This 30-year-old artist behind it all

Home is where the heart is. Going by that logic, one may question why we disregard our home. No, we are not referring to the concrete walls you live within, but Mother Earth, our collective abode. How can one build a house with a complete disregard for our home? The cement, the plaster, plastic and what not — all materials that don't go down well with the environment are used. But then what's the option? Going back to living in unstable kutcha houses? But there are visionary men who have discovered a middle ground and it is these men Harsha Durugadda bumped into, intentionally and unintentionally, to develop a biophilic understanding. Biju Bhaskar, the founder of Thannal in Tiruvannamalai; Krishna McKenzie from Solitude Farm in Auroville; Australian sculptor Ron Gomboc and the eternal words of the philosopher, the late Jiddu Krishnamurti, all those whose environment-conscious is evident no matter what they pursue, are the few of many who the 30-year-old international artist was impacted by. 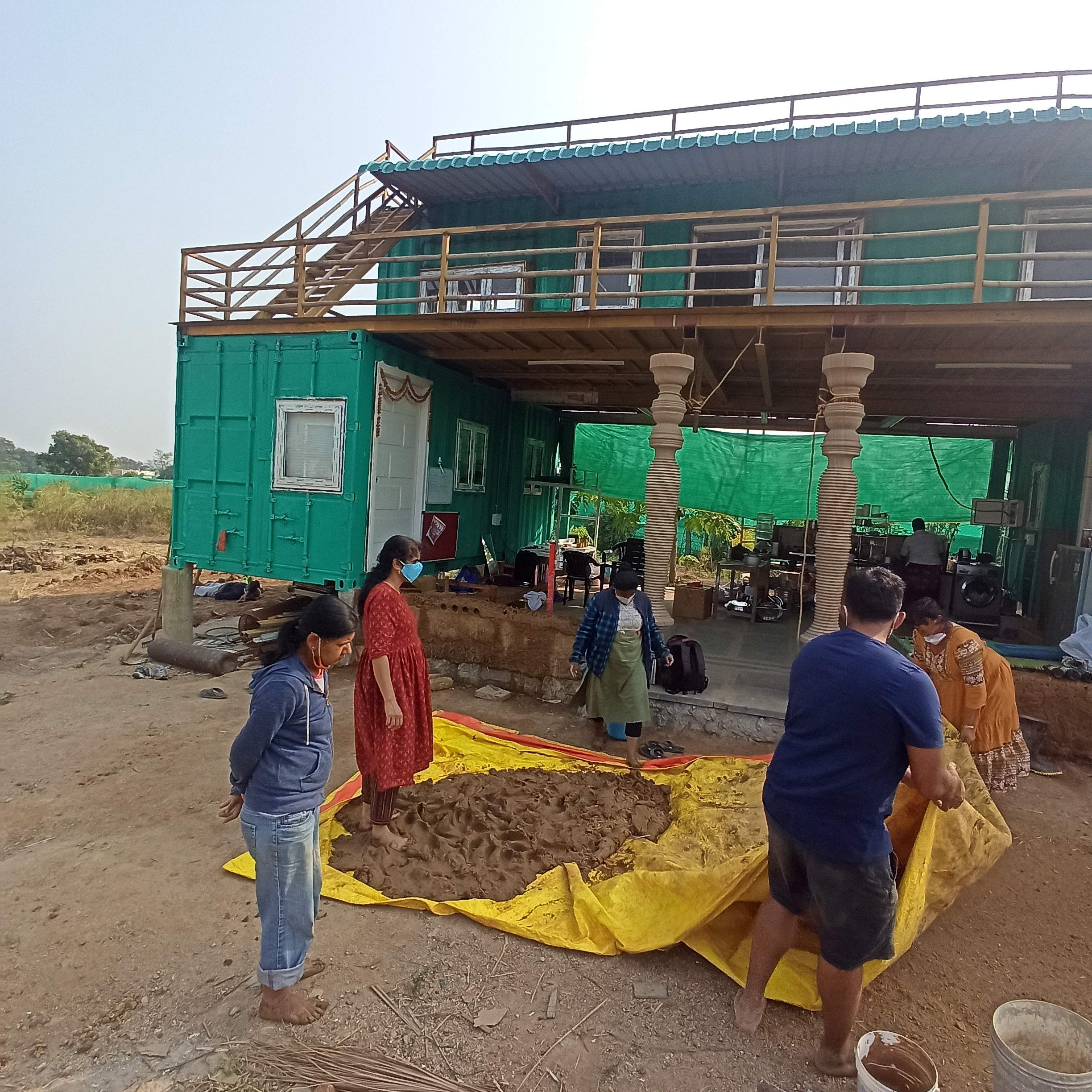 "We can all agree upon the fact that we are expected to leave the Earth a little more beautiful than we found out, right? In this context, I was meeting people who knew the value of what's in their own backyard and I was learning from them all," explains the Hyderabadi. But as an international artist, though the term he prefers is practitioner, who has his art — sculptures, performance art, installations and more — displayed in New Delhi, Kolkata, London, Sydney, Portland and other places, how did his interest take this direction? For that, we need to understand the practitioner a little more. Harsha is not bound by art, he is liberated by it. Nor is he limited to a particular stream of art. That's why his sculptures often have a fluidity while his performance has a certain stillness. Hence, two years ago, he purchased one acre of land near Chilkur in Hyderabad and started his own permaculture farm. He is also building his own residence and a tree house with poured walls. And a sculpture studio, made using the cob building technique, hosts several workshops. This place that he calls home is Oorna Permaculture Farm.

Shilpa Teja, a textile designer who works with natural dyes, is also incharge of the farm. She has also pursued a Permaculture Design Course and runs a fabric recycling project too

When it all began
June 2019 was when work on Oorna Permaculture Farm started with plantations and the water harvesting system given the first priority. On the two tamarind trees the process of constructing a tree house has already begun. "The point is to have multiple touch points within the same space," says Harsha who pursued his MA in Arts and Aesthetics from Jawaharlal Nehru University, New Delhi. Having done a short course on Bioclimatic Earth from Auroville Earth Institute he began constructing poured walls for his sculpture studio. That's basically a lot of earth (mud) mixed with debris and a wee bit of cement. His own residence is made of cobbed walls. This is clay-rich soil and straw stomped on vigorously to achieve dough like consistency. "In fact, there are oven cobs too, which are your earthen ovens for woodfired pizza. We conducted a workshop recently to teach people how to build these and they were fascinated," says an equally fascinated Harsha. Talking further about building this space, the youngster says, "Every earthen structure engages the community and there is no way you can mechanise the process. You can't quicken the process either and that's the beauty of it. It happens at it's own pace, just like nature, slow and steady. As opposed to being fixated on speed, like we all are currently." Indeed, art has made him a philosopher of sorts too!

Art for art's sake
A fruit orchard with pomegranate, guava and mangoes; flowers and the regulars like spinach, turmeric, coriander, tomatoes, chillies and so on — permaculture is used to grow it all. The piece de resistance, at least according to this writer, is the sculpture studio. The studio is equipped with all materials, from metal, stone, wood and fiberglass, to all equipment like grinder, machinery which helps with basic cutting and grinding. This is where Harsha makes art. Or does art make him? "The space is certainly influencing my practice," he laughs as he says. 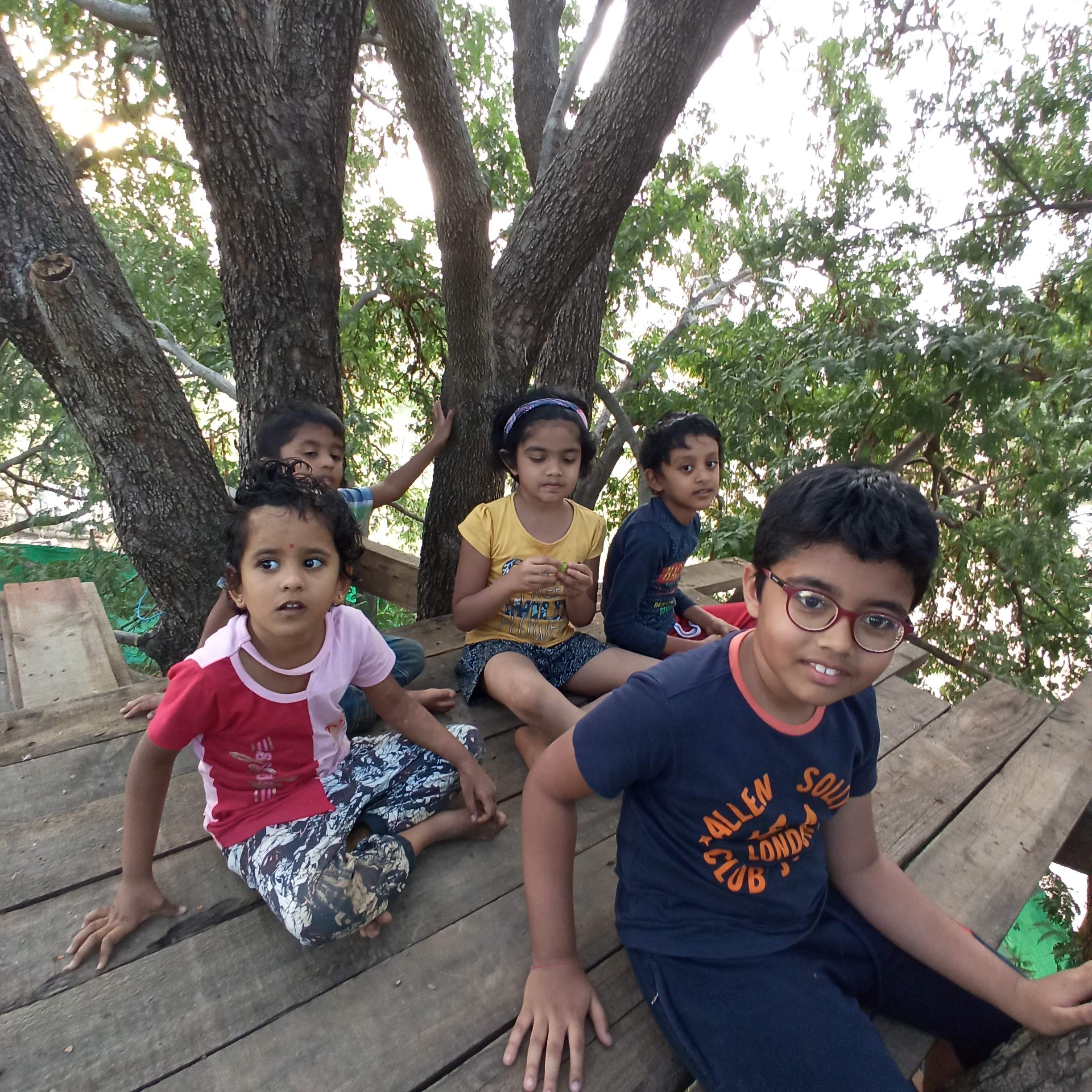 The first workshop was conducted in November 2020. Keeping the pandemic in mind, they cap the participants at eight. The youngster, who was on a roadtrip to Mangaluru when we caught up with him, shares with us an experience of a doctor, who is an ICU Incharge, and what happened when turned up at one of their workshops. "He was so thrilled to be connecting with earth this way. He said he couldn't recall the last time his hands were smeared with mud. And that's what these workshops do, they help you reconnect with mother nature, with yourself," he shares.

His work FishLove is made of sandstone and exhibited at Sculpture by the Sea, Cottesloe Beach, Australia; Absent Faces is an installation with a tall, pillar-like structure with glasses all over it and Bold & Boulder is a performance art piece

Basically, at Oorna Permaculture Farm, it's all about making functional art, not just functional space. So that when you step into the studio and you look at the walls, you don't see paint. You see mud, which takes you back home, to your true home, Mother Earth. 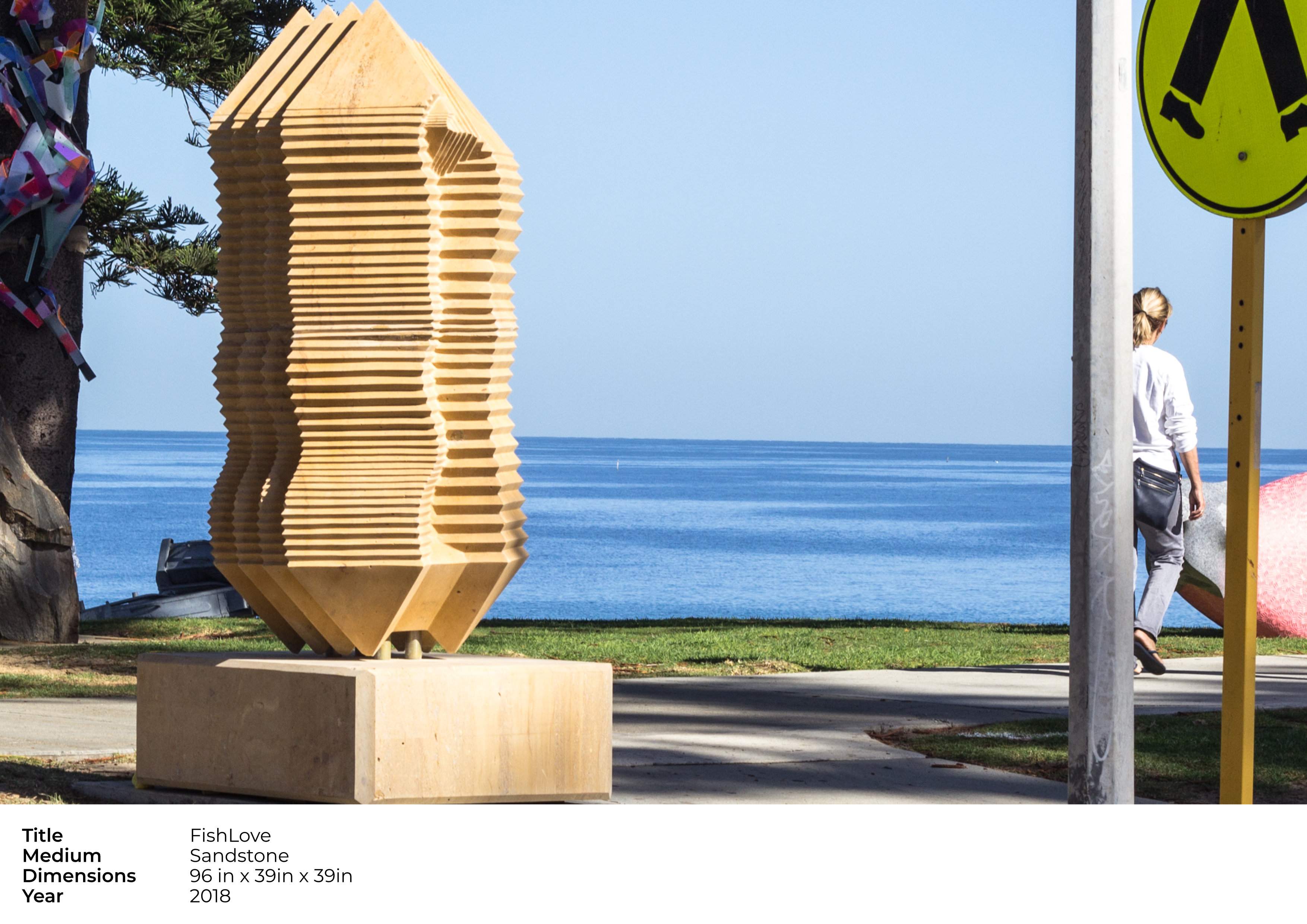 Who are they?
Wondering who are the people mentioned in the story? Here's more on them
- Biju Bhaskar: Thannal Hand Sculpted Homes was started by Natural Building architect Biju Bhaskar and his wife Sindhu Bhaskar in the year 2011. They focus on indigenous knowledge in shelter making and conduct workshops around it
- Solitude Farm: A group of Aurovillians started Solitude Farm including Krishna McKenzie in Auroville. Inspired by Japanese farmer Masanobu Fukuoka, this group focusses on Natural farming and permaculture
- Ron Gomboc: Founder of Gomboc Gallery Sculpture Park in Australia, Ron has installed several indoor and outdoor sculptures that have been made from from a wide range of materials for everyone to see
- Suresh Kumar: This artist started Sarjapura Curries in Bengaluru in an attempt to revive forgotten plants and edible weeds that are local to the city. They want to bring back local and seasonal dishes as well 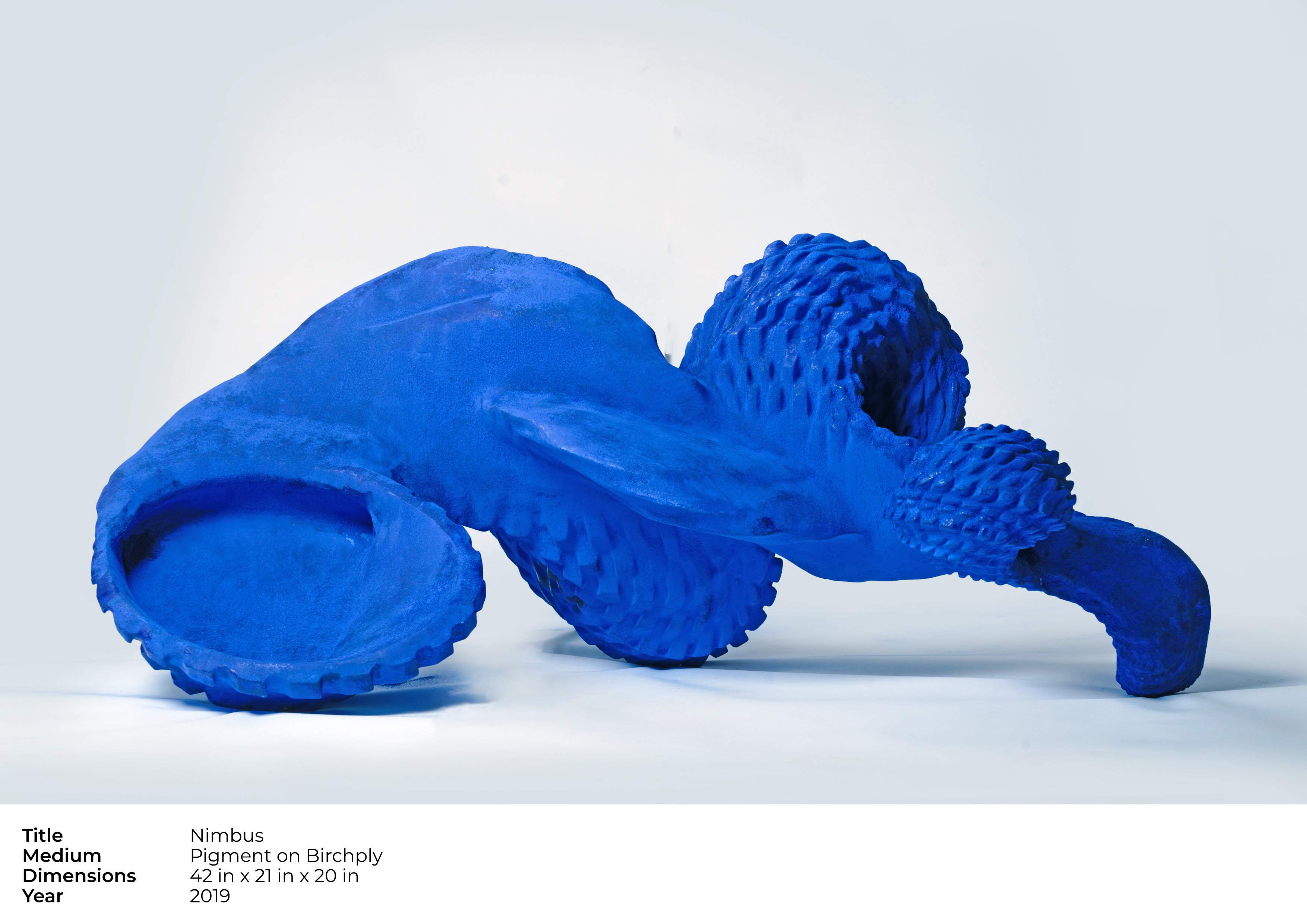 What is cob building?
- The term comes from Old English term for ‘lump’
- Clay-rich soil is mixed with straw and stomped on
- No fancy equipment or materials are required
- One can also add stones for stability
- Because it is porous, it can stand both the rain and sun

What are poured walls?
- 70% earth, 5-10% cement and old debris
- Cement helps stabilise the structure
- It doesn't have joints so is easier to waterproof