After working on the BGM for Oscar-pick The Last Color, this Odia sound engineer is on a roll

As sound engineer, singer and composer Priyabrata Panigrahi's second Sambalpuri single, Bheeja Bheeja Maati, is about to release next month, this is what you can expect from this super sofy number

Rains hold a special significance in Priyabrata Panigrahi's life, we have come to understand. You see, the multi-hyphenate youngster, who is a sound engineer, composer, lyricist and now, a music video director too, wrote his second Sambalpuri single, Bheeja Bheeja Maati, during one of his first monsoons in Mumbai in the year 2013. Ah! No wonder it has a romantic aftertaste. "The weather was good so the tune came to me and the lyrics followed," says the Film and Television Institute of India (FTII) alumnus, rather matter-of-factly. Expect a soft number, relatable lyrics and a tune that will find a permanent place in your heart. Bheeja Bheeja Maati, which will release next month, comes on the heels of his first Sambalpuri single Tui More Sapne Re Gauri which has over 20k views on YouTube. We wonder how many views the second song will garner!

Born in Balangir and brought up in Sambalpur, it's been about a decade since he has been calling Mayanagri Mumbai his home. He went there right after pursuing his degree in Sound Recording and Sound Design from FTII, Pune. Though he has been in the top 100 of Indian Idol season 3 and has serenaded many with his voice, soon after, he realised that there is much more to music than just singing. That's when his interest in sound engineering grew. "The legacy of FTII, that counts Oscar-winning sound designer Resul Pookutty as its alumni, inspired me and I knew that's where I wanted to study," says the 32-year-old.

Though he has much to his credit, including working on documentaries by national award winner Nila Madhab Panda, his big break came when he was given the responsibility of the background score for India's Oscar pick The Last Color. Directed by Chef Vikas Khanna and starring National Award winner Neena Gupta, it is one force of a film. Khanna's Director of Photography was Odia and that's how the latter came to recommend Priyabrata's name for the film. And guess what? Priyabrata, fondly known as Pani, met Khanna in 2018, during the rainy season! "We bonded over The Beatles and Pink Floyd. He came to my home studio at 4 pm and we worked on something, he left at 4 am!" exclaims the part-time educator who teaches at St Xavier's College and other institutions. We are told that Khanna really loved his work! 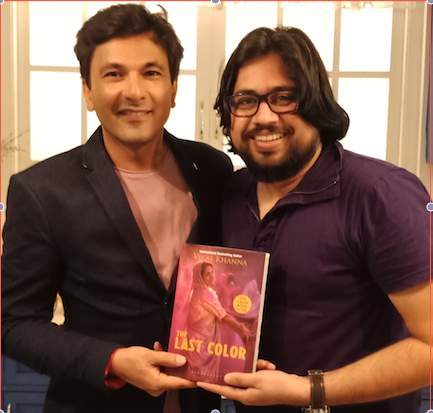 Though he returned to Odisha this August, Priyabrata takes us back to his regular life in Mumbai, saying, "I am usually on-site, handling the sound department with the help of assistants or I am at home, working," says the workaholic, who works 16-18 hours a day with the help of coffee which courses through his veins. But he wouldn't have it any other way clearly! Currently, Priyabrata is working on a documentary for Netflix and a few festival short films. Do keep an ear out for this Odia guy, we say!