This 13-year-old from Vijayawada is reviewing books she loves. Check out her cool YouTube channel

Apart from reviews, Sri Harshika Gudlavilleti also ensures that she gives information about important details like, price of the book, publishers, number of pages and a little about the author too

A bookworm begets a bookworm — that's clearly the logic behind why Sri Harshika Gudlavilleti is such a voracious reader; her mother Rekha Gudlavilleti is one too. One of the very first book that the 13-year-old was introduced to was The Blue Umbrella by Ruskin Bond in class III and the saga began there. In Harshika's own words, "I fell in love with Ruskin Bond’s writing and it prompted me to read more books." So she did. And the lockdown has freed up a lot of time for this Hyderabad-born who currently resides in Vijayawada.

Though she is starting out, she has over 167 subscribers

What's more special than a child who reads? A child who reviews the books she reads on her own YouTube channel, book talkies, of course. "Once, at school, I was asked to review a novel. When my teachers appreciated me, I gained confidence. I grew more confident after I sent a letter to author Sowmya Rajendran regarding her book Mayil Will Not Be Quiet and she actually replied, sounding very impressed with me!" she exclaims. This resulted in Harshika initiating her own YouTube channel in June 2019 and now, with time on her hands, she is back doing what she enjoys best.

These videos are short and are shot with the help of her sister (Harshini), mother (Rekha) and father (Murali), and are usually done extempore-style and in one take. Of course, things did not start out that way. "Initially, I used to have a detailed script and had to record the video two to three times because I was camera shy. Now, I can nail it in one take," says the student of Slate - The School. This student, who has reviewed books like In Grandfather's Garden (Ruskin Bond), The Day Grandfather Tickled A Tiger (Ruskin Bond) and Sunita's Secret (Narinder Dhami), and prefers classics and crime thrillers, even reads from the books for her videos at times. 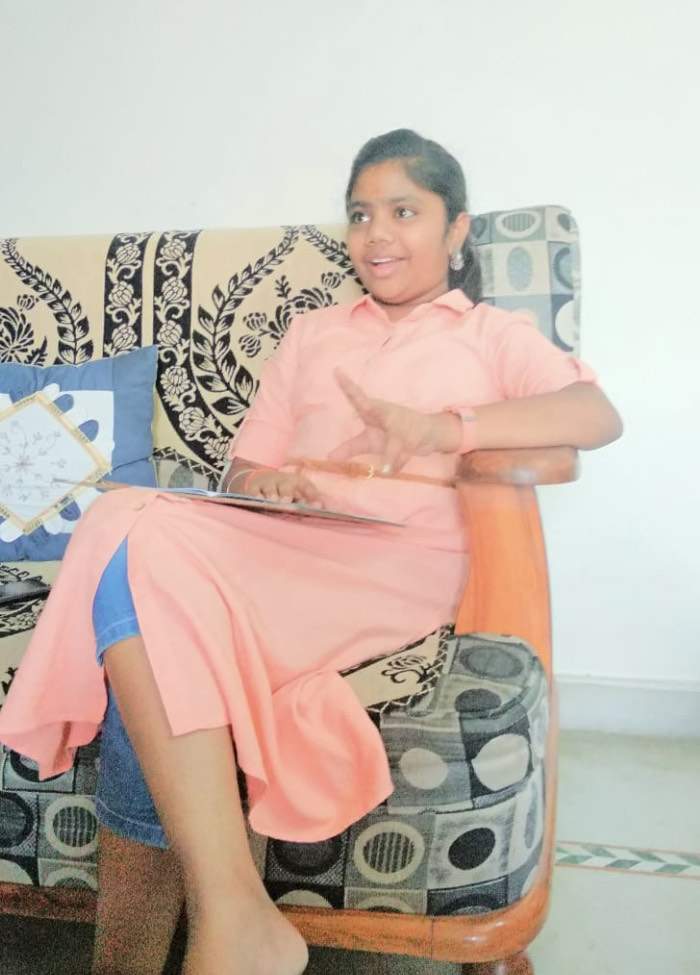 Reading is not all she can do, though. Harshika has also taken an online course on creative writing by author Anupama Dalmia and she has contributed to two anthologies which will be published soon. We also hear that she is good at academics and can whip up a mean bowl of pasta. The rest of her time during the lockdown is also dedicated to chess and Vedic Math e-classes, and badminton with her sister.

She has a total of over 5,500 views on her channel

Her reviews of...
- Exam Warriors by PM Narendra Modi: She feels that this book helps develop ourselves to ace our lives in the best way we can
- Alice in Wonderland by Lewis Caroll: She feels it is amazing and an all-time classic
- Little Women by Lousia May Alcott: Feels this is the best bet for all of us because we can think and change our lives the way we want just like the sisters in the book did
- The Hidden Pool by Ruskin Bond: She felt as if everything is happening in front of her eyes while reading the book

For more on her, check out bit.ly/3bQ7kY4