The Walls are Alive with the Sound of their Muse: Meet Telangana's wall art king and queen, Swathi and Vijay

If Bristol has Banksy and Mumbai has Tyler, Telangana has Swathi and Vijay. Their work, mostly concentrated in Hyderabad and Khammam, provokes thought and inspires everyone who looks at it

If Swathi and Vijay's street art could speak, we wonder what it would say. Some meanings of their latest work are quite clear cut, like the Ashoka emblem whose lions now don face masks along with a broom, a stethoscope and a police cap while maintaining social distance and imploring us to do the same. Then there is the mammoth 55 feet mural of Olympic medal winner PV Sindhu with her eyes on the birdie, as always, inspiring us to keep our eyes on the prize too. Both are in Khammam, Swathi's hometown, where the husband-wife duo is currently. "We were always clear that we wanted our art to provoke thought and yet, be simple enough for even a layman to understand," says Swathi. Since 2008, the duo has been painting Hyderabad in various hues and every colour they have painted on the walls has been for a cause. Jab they met
The meet-cute of Swathi and Vijay, who prefer to have no labels like surnames attached to their moniker, happened at Jawaharlal Nehru Architecture and Fine Arts University where they were pursuing their Bachelor's in Fine Arts. Swathi was specialing in Painting, Vijay in Advertising, and they ended up having a lot to discuss. They graduated in 2007 but it is the year 2008 that holds a lot of importance in their life. Because it was the year they got married and the year they made their first artwork. 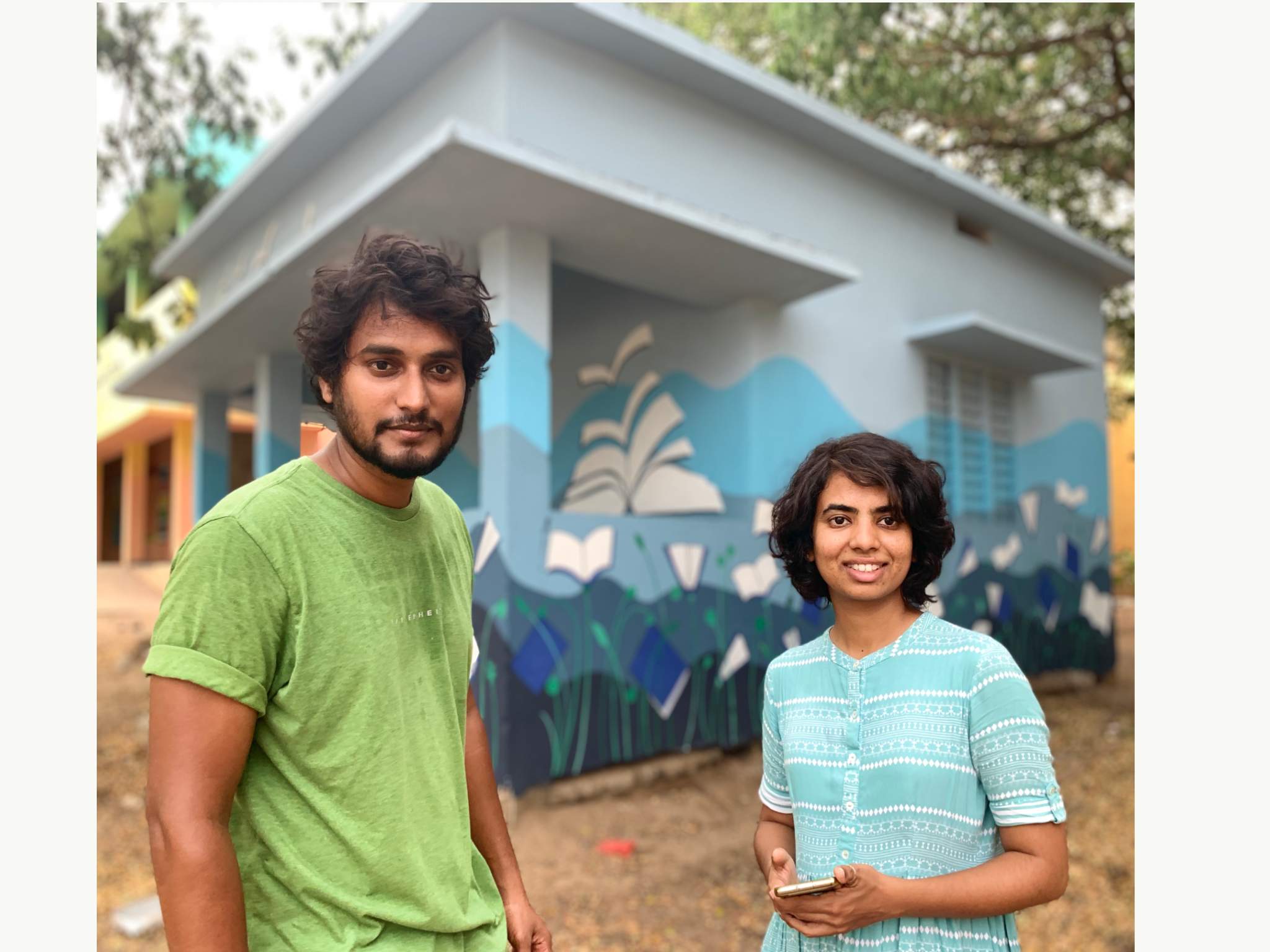 The artwork was in the context of peak Telangana agitation for a separate state, where protestors were also known to have thrown stones at the police. So the duo took to Jubilee Hills Check Post and painted a mural of Mahatma Gandhi throwing flowers, emphasising the need for non-violence. Pretty deep for their first, huh? However did they manage to get the permission anyway? "If we had to wait for permissions, the issue itself would've become outdated," says 36-year-old Vijay and laughs. He is also grateful for the fact that there has been no complaint against them, legal or otherwise. "People here are kind-hearted," he says. Though a certain wall art asking people to adopt heritage buildings because they 'are orphans' did spark an online debate.

In 2019, they launched a campaign with posters stating 'Missing: Honest Politicians' in a bid to spread awareness about NOTA

"Since we exhibit our art in public spaces, directly projecting into the minds of people without their permission, it needs to be positive," explains 32-year-old Swathi who describes herself as a 'let it go' person, while Vijay is the more aggressive, questioning one. So the principle they operate on is striking a balance between what they stand for in a way that the artwork satisfies them both. "Basically, I respect Swathi's opinion completely and Swathi respects my opinion only partially," says Vijay and bursts out laughing. The duo also bagged the French Embassy - Krishna Kriti Foundation Co-financed Scholarships for Fine Arts in 2013 which took them to Paris and eventually, they exhibited at Biwako Biennale in Japan as well. "If Paris taught us how to be artists, Japan taught us how to be human beings," says Vijay. 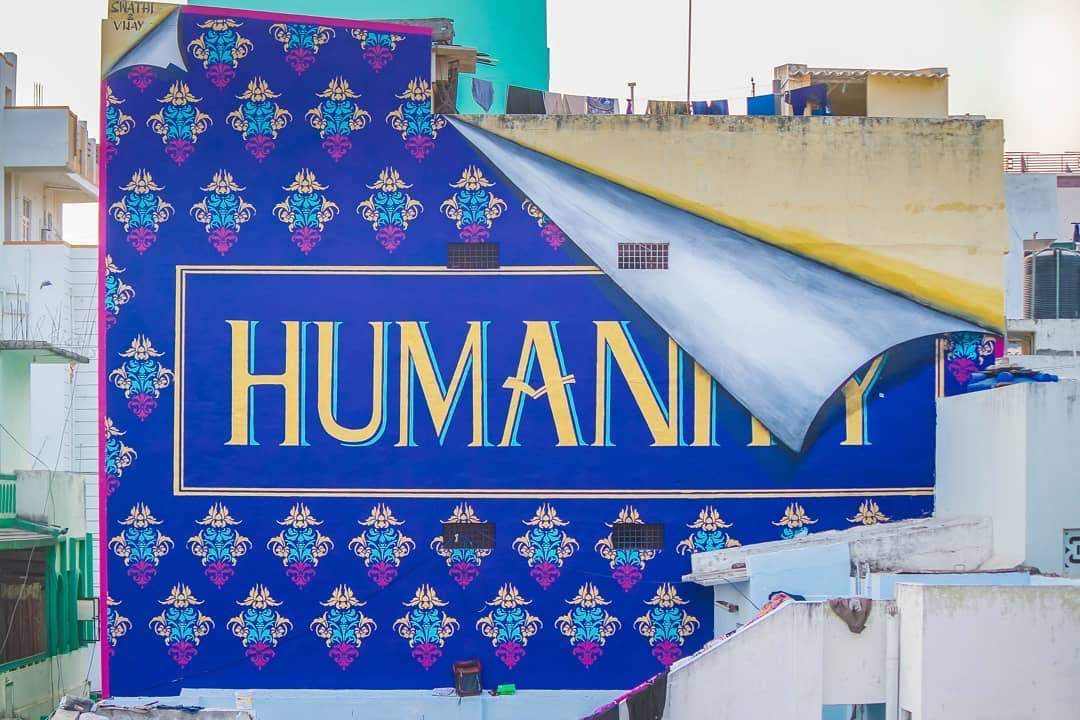 Their work | (Pic: Swathi and Vijay)

Love for schools
Apart from the chemistry that this couple shares, we also love the project they took up to paint schools in villages of Telangana, to help with their attendance. "I studied in a government school so I know its importance. When I was reading about these schools shutting down because of lack of attendance, I thought we should do something," says Vijay and Swathi adds, "Usually, school walls already have something or the other pertaining to academics, so we did not want to add to it. But, at the same time, we also wanted to build a connection with students."

On the occasion of India's 69th year of independence, they wrote on a road, in huge letters, asking people why they love India and gave them options like justice, healthcare and so on

The duo took up their first school project in 2016 at Rangasaipet, Warangal. Two overturned books on the roof raining down letters of the alphabet on merry students — that was the concept they painted. The next academic year, the attendance shot up to 36, much to the delight of the school management and the couple. They have undertaken four schools to date, the most recent being Nayabazar Government High School in Khammam. This was done upon the request of the Khammam commiserate. As a tribute to the recently deceased basketball star Kobe Bryant, they painted a huge mural of his on a wall of the indoor basketball stadium at Pavilion Grounds in Khammam, which was inaugurated by MA&UD Minister KT Rama Rao in March. 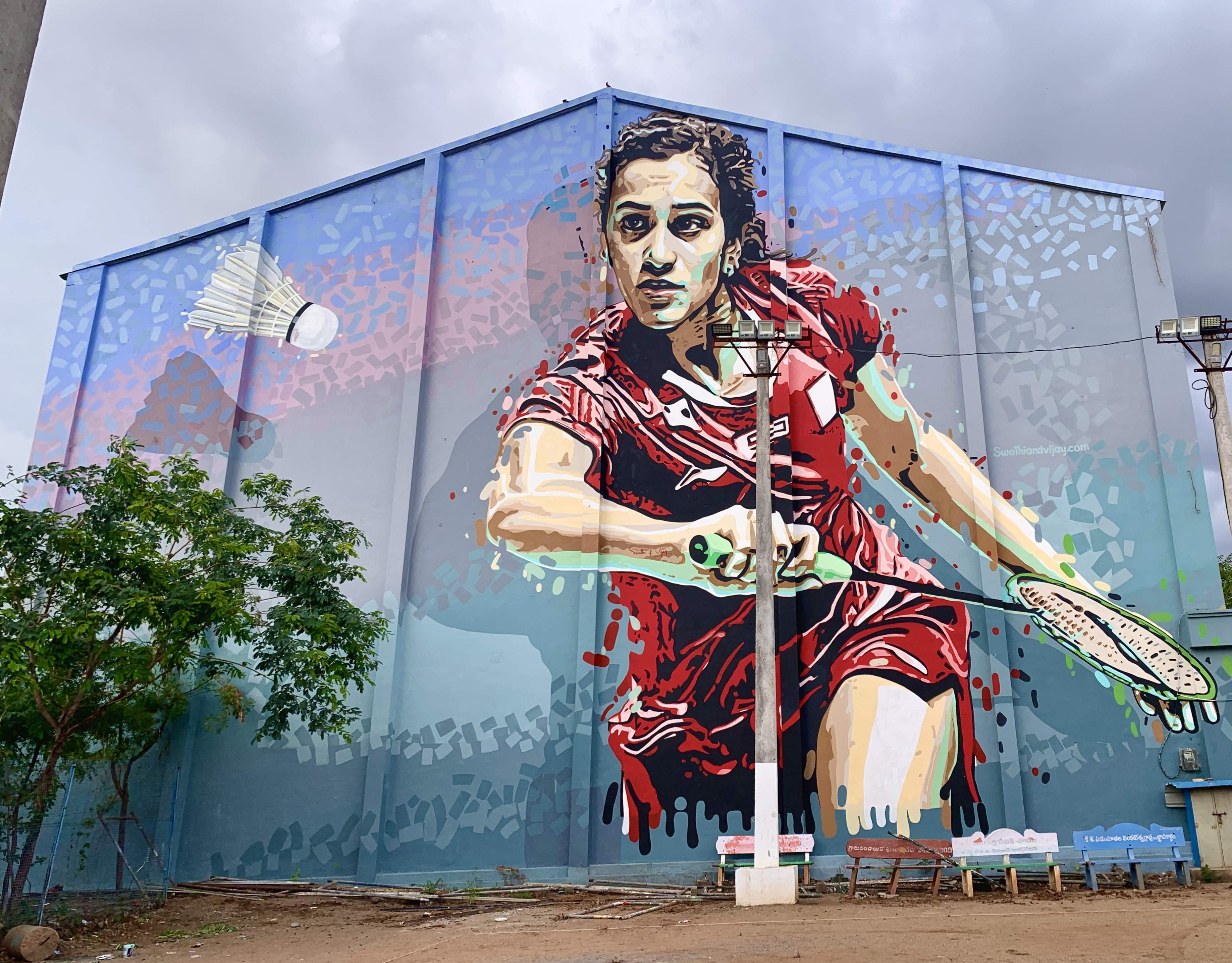 The one with Sindhu | (Pic: Swathi and Vijay)

So, if you are wondering what's next for the duo, don't. Whoever knows them also knows that this is not something one should be asking the spontaneous duo. "We never plan our next work, an Facebook status, an ongoing issue, anything current sparks a thought in our head and then, we act on it," says Swathi. So all we can do is keep an eye on our walls in the meanwhile.

Attendance boost
Some of the schools whose walls they have painted were in -
- Rangasaipet in Warangal
- The Bodhi School in Narayankhed, Sangareddy
- Narayanapuram Government Primary School in Khammam

Pictures from their work in schools 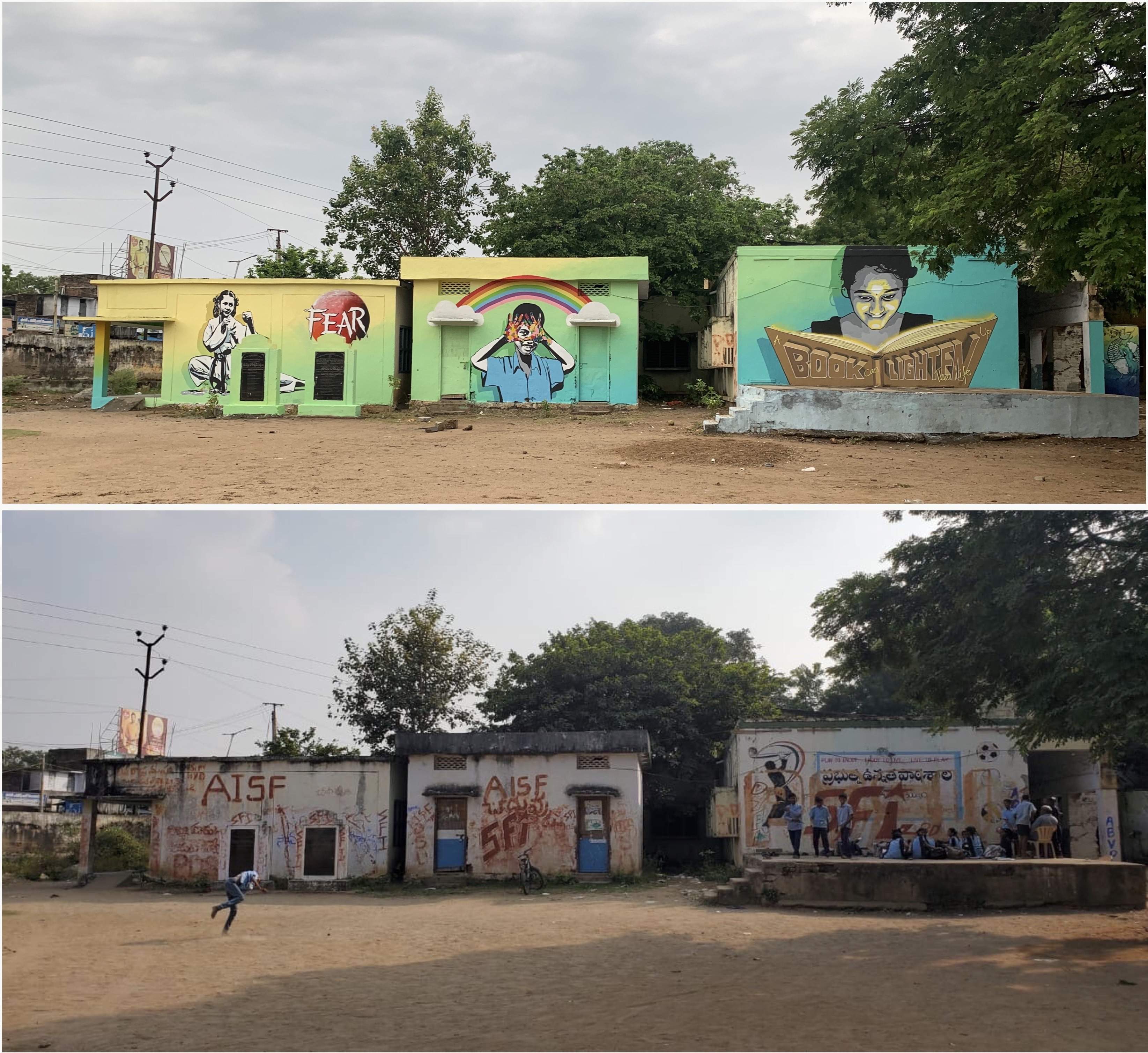 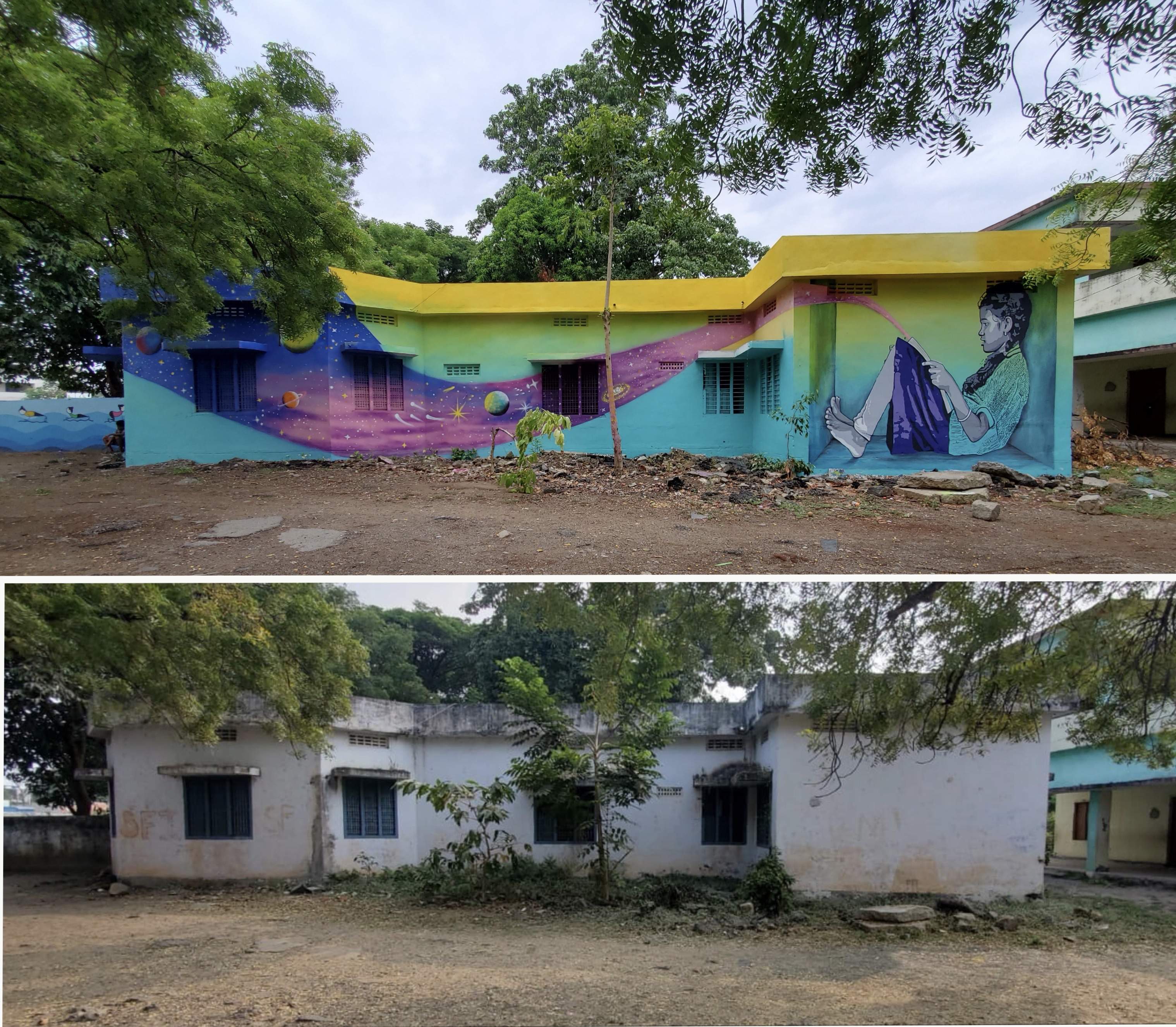 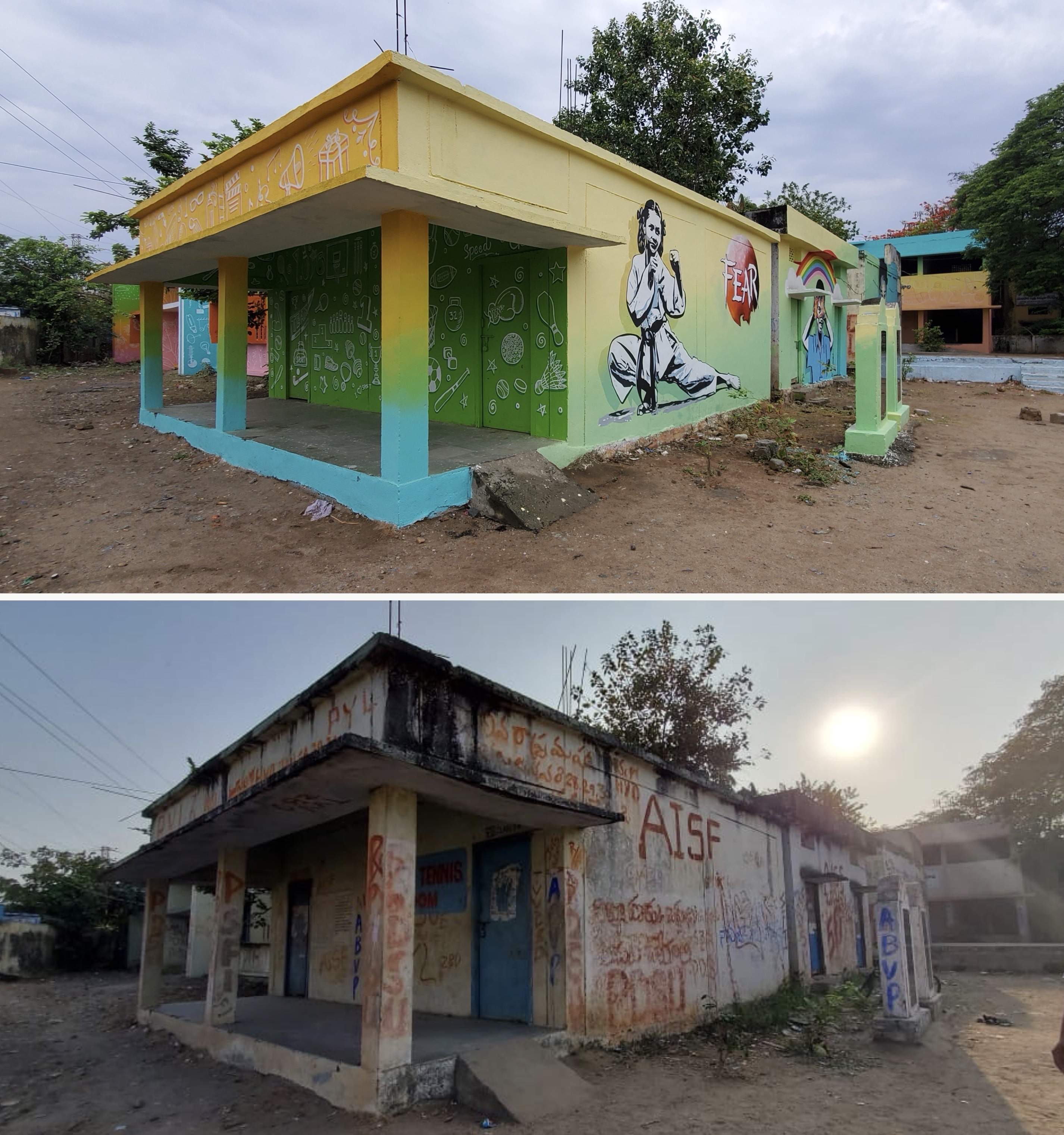 Some more of their work 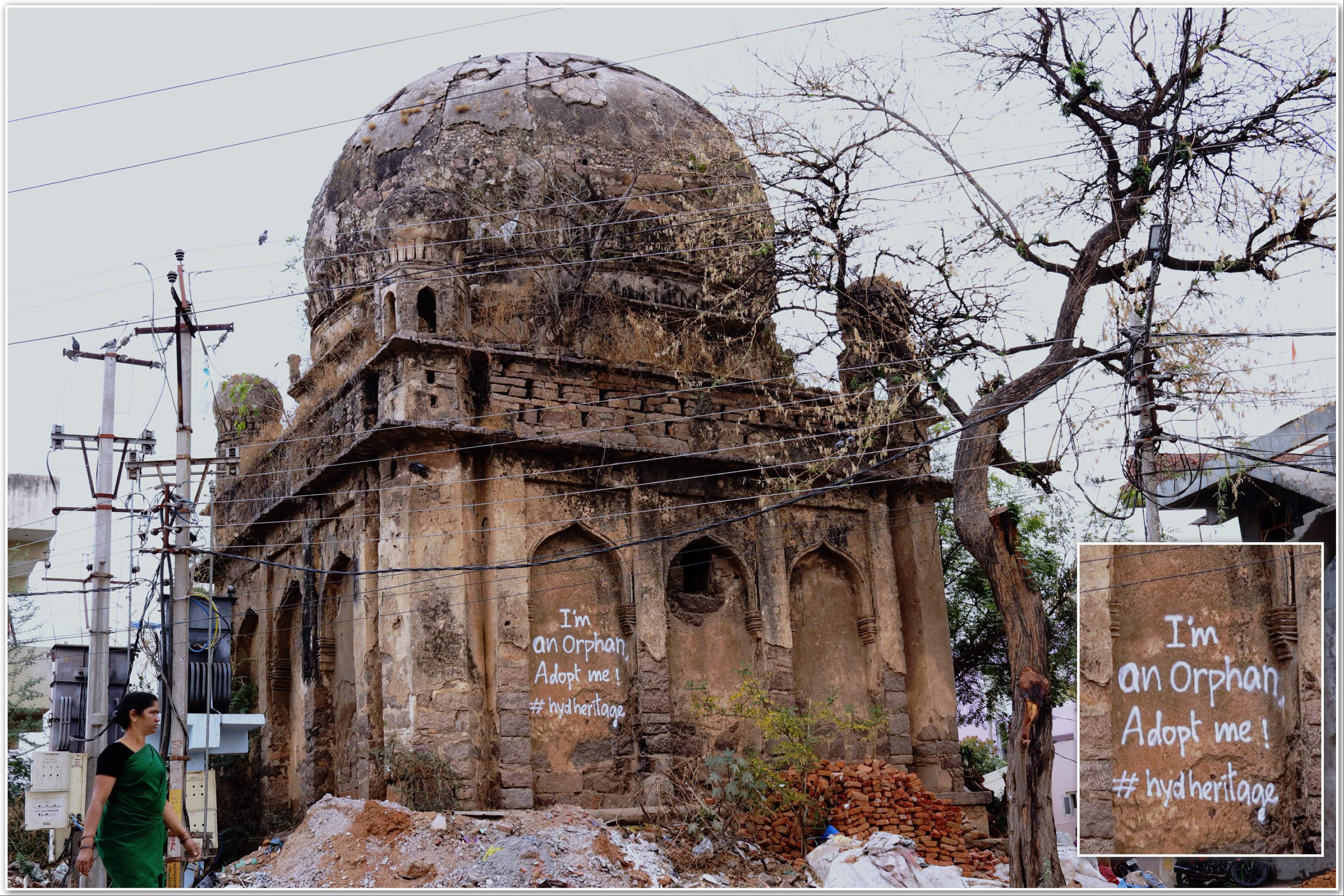 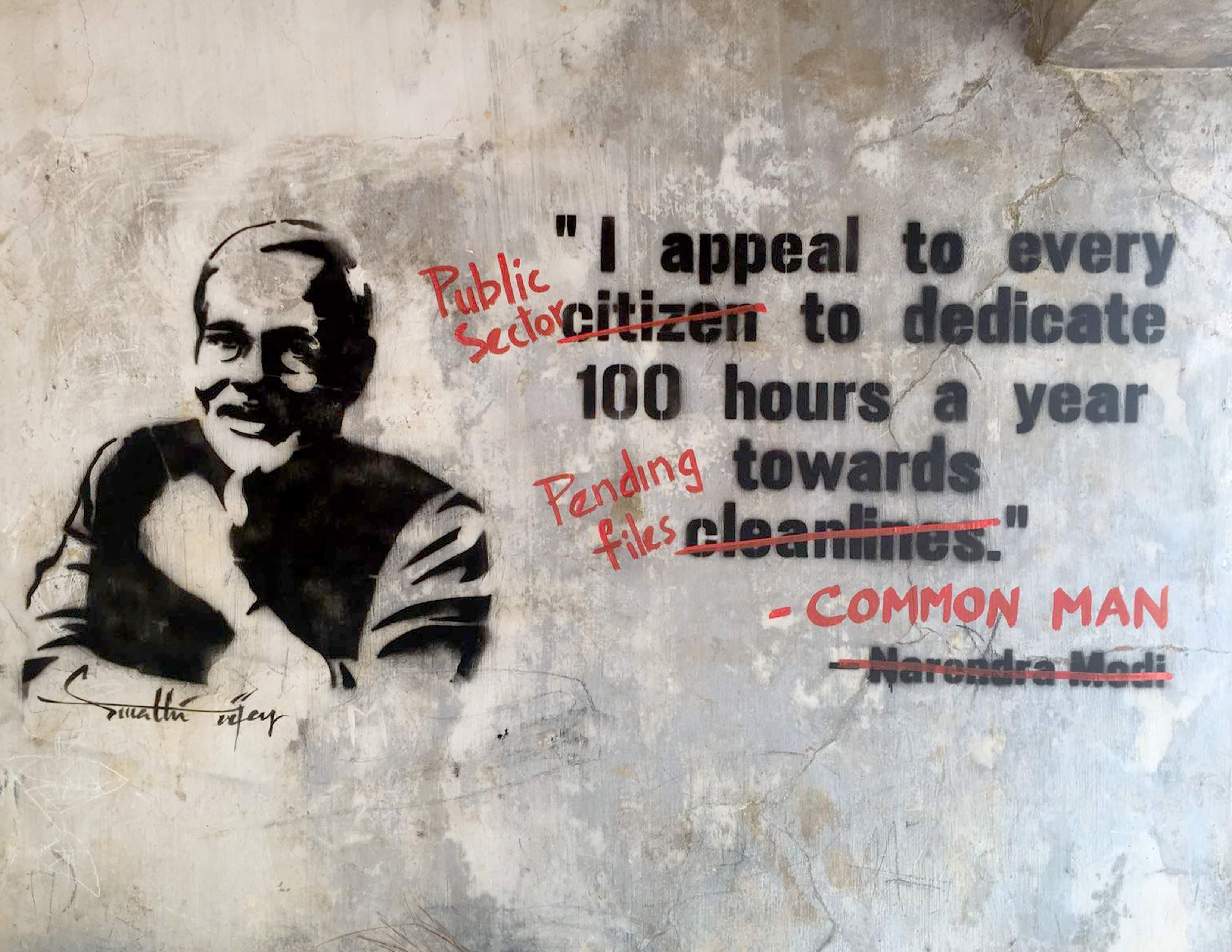 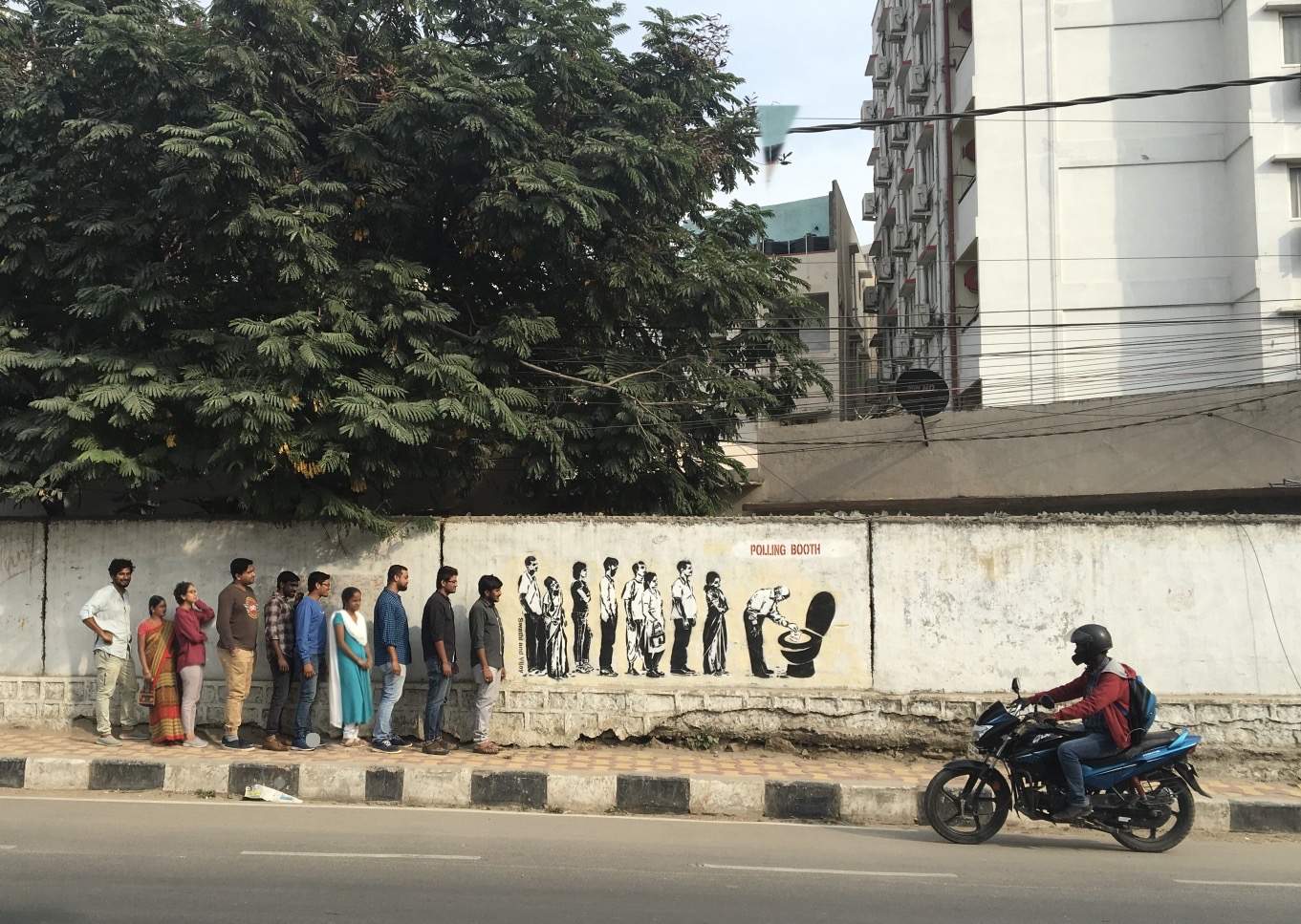 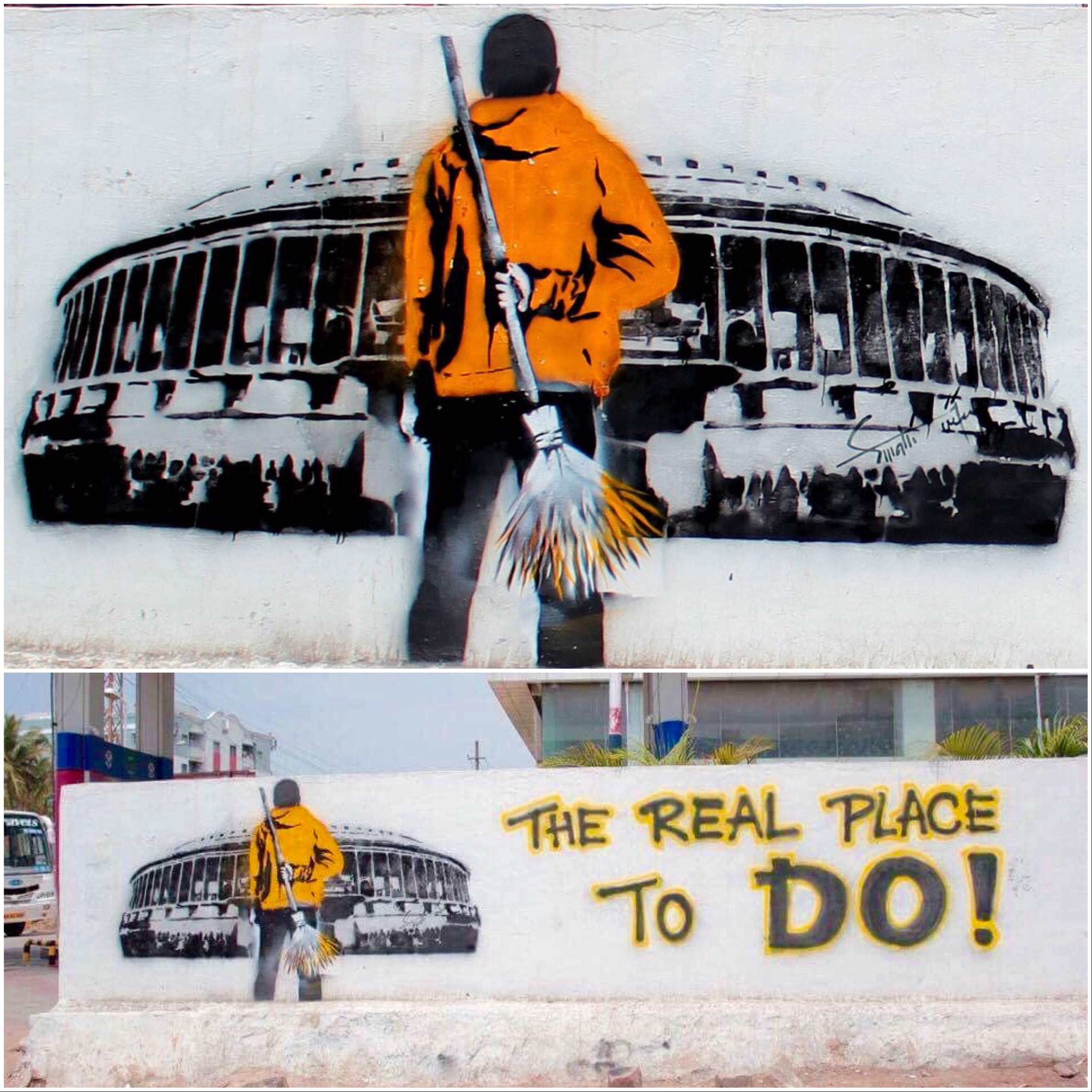 For more on them, check out swathiandvijay.com